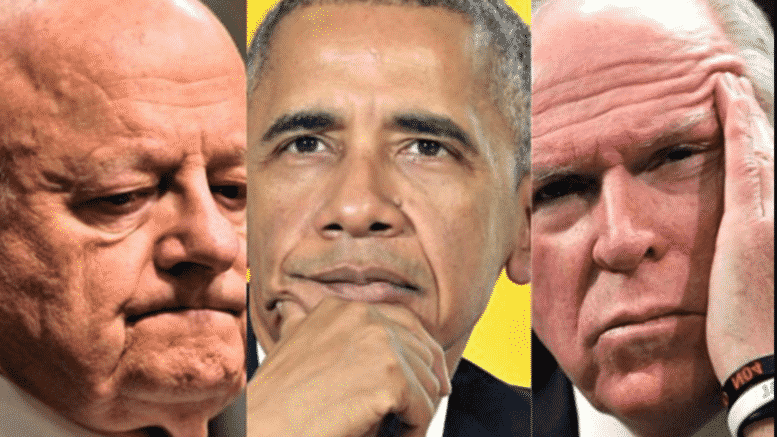 Posted By: Mary Fanning and Alan Jones via The American Report November 5, 2020

Please Share This Story!
PDF 📄
The Intelligence community is largely staffed with Technocrats who have no ethical boundaries when operating outside of the law. Hacking into computers to flip votes is a previously established fact, but is not being discussed during the 2020 election debacle.

That Obama’s former Director of National Intelligence James Clapper and his Director of the CIA John Brennan are part of the proverbial “Deep State” is an understatement. They are on record as hating Trump with a passion and have stated their willingness to do anything to scuttle his chances of reelection. The big question to ask now: Is The Hammer and Scorecard or its modern derivative in operation today? ⁃ TN Editor

In February 2009, the Obama administration commandeered a powerful supercomputer system known as THE HAMMER. THE HAMMER includes an exploit application known as SCORECARD that is capable of hacking into elections and stealing the vote, according to CIA contractor-turned-whistleblower Dennis Montgomery, who designed and built THE HAMMER.

SCORECARD is now being activated to steal the vote on behalf of Joe Biden once again. Biden utilized THE HAMMER and SCORECARD while running for Vice President in 2012. Votes are again being stolen on Joe Biden’s behalf as he runs for President of the United States in 2020.

This time, SCORECARD is stealing votes in Florida, Georgia, Texas, Pennsylvania, Wisconsin, Michigan, Nevada, and Arizona, according to Montgomery.

SCORECARD steals elections by tampering with the computers at the transfer points of state election computer systems and outside third party election data vaults as votes are being transferred.

SCORECARD uses a prismatic scoring algorithm that Montgomery created, to achieve the desired results by those that control THE HAMMER and SCORECARD.

In Florida, one of the transfer points is VR Systems Inc, based in Tallahassee.

CIA whistleblower Dennis Montgomery turned over a massive cache of illegally harvested surveillance and election data in August 2015 and December 2015 to the FBI and CIA under two immunity agreements that were granted to Montgomery by Assistant U.S. Attorney Deborah Curtis and FBI General Counsel James Baker.

Montgomery testified regarding SCORECARD and THE HAMMER while under oath and while being videotaped at the FBI’s secure Washington DC Field Office SCIF (Sensive Compartmented Information Facility). If CIA whistleblower Montgomery had lied about anything he would be in prison today for lying to the FBI. Montgomery is not in prison.

Director of National Intelligence John Negroponte invoked the State Secrets Privilege and the Government Protective Act against Montgomery in order to muzzle Montgomery and prevent him from revealing illegal acts that had been committed by the government.

The Obama Administration illegally commandeered THE HAMMER and SCORECARD. They moved THE HAMMER to Fort Washington, Maryland on February 3, 2009.

Copied Translation: We Americans want to turn Frankfurt into Omaha/Nebraska, if you know what I mean, and we do it. Neil Postman Supercomputer system called THE HAMMER – so Obama is a typical American. What else? The fact that election computers are used to manipulate elections can be counted on 5 fingers. This is the real bureaucrat who thinks like Obama, not efficient, but militant and sexy. “The “ugly American,” who appeared like a gorilla in all parts of the world, recurped and called to order, thought everything was for sale and was shy for anyone who did not have… Read more »

I believe manipulating votes not only in Michigan but other states. They all need to be recounted especially the states that used Dominion Software.

No need dems were certain they were going to win…recall HRC expectant speech, headlines printed up ahead of results, etc. only to be defeated.

We’re in the f**king twilight zone…

Does Trump know about The Hammer and Scorecard???

Yes his aid Tweeted out that ” Beginning Monday, Hammer and Scorecard will become a household name”

Do you have a link to this? I do not see it anywhere. 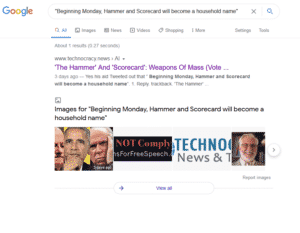