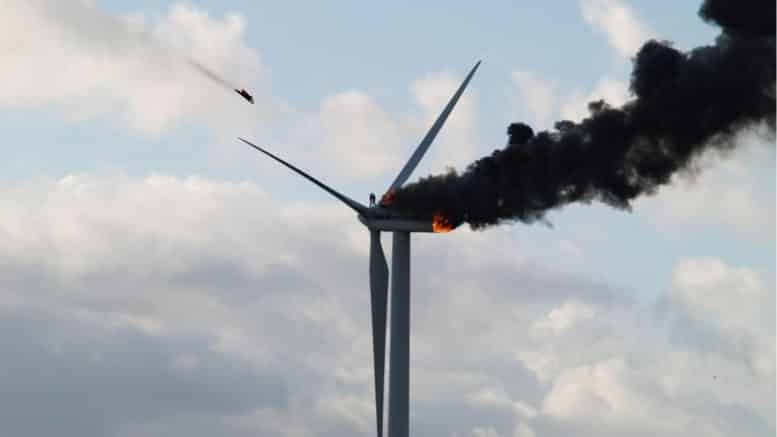 Please Share This Story!
PDF 📄
Technocrats should back up a few steps and look at the foolishness of their plans: To power America with 100% renewable enerty they propose 500,000 wind turbines, 18 billion square feet of solar panels, 75 million residential rooftop systems, 50,000 wind and solar farms. The projected cost is a minimum of $15.2 Trillion. However, we are already fully powered with enough oil, natural gas and coal resources to last another 200 years. ⁃ TN Editor

There is a video where critics of a proposed 2015 plan to power the US with 100% renewables lay out their case.

They are not anti-renewables but they are pro-math. They worked out the issues of spacing of large scale solar panels and wind turbines.

Jacobson agreed with them that his base proposed system will cost $15.2 trillion. If there is need for 24 hour and not 4 hours of energy storage then the cost of the plan goes up to $22.8 trillion. This assumed various efficiency and other factors were granted as improvements to the 100% renewable plan.

These critics propose all nuclear options which would cost $3 to 6.7 trillion.

Jacobson’s paper appeared in the Proceedings of the National Academy of Sciences. Bernie Sanders and others pushed the proposal as a solution to climate change. The PNAS journal published a lengthy critique by environmental scientist Christopher Clack and 20 co-authors. They questioned Jacobson’s assumptions and methodology, appeared Feb. 24, 2017. Jacobson launched a $10 million lawsuit against Clack but then dropped the lawsuit in Feb 2018.

The baseline value for cost of capital in the Jacobson paper is one-half to one-third of that used by most other studies. Using more realistic discount rates of 6–9% per year instead of the 3–4.5% would double the estimate of a cost of 11 cents/kWh of electricity to 22 cents/kWh, even before adding in other unaccounted for capital costs.

Both hydroelectric power and flexible load were modeled in erroneous ways and that these errors alone invalidate the study and its results.

Using Jacobson’s own numbers of how many hours per days they would be able to generate power and using the Jacobson numbers for pumped hydro backup power. The Jacobson 100% renewable plan will be short 90% power in the winter.

WHEN I WAS WORKING FOR THE COULEE DAM A 2000 MEGA WATT HYDRO PLANT IN 2009 I WAS AT A MEETING AND THEY SAID THE GOVERNMENT NO LONGER ACCEPTED HYDRO AS A RENEWABLE SOURCE OF ENERGY AND TOOK AWAY MONEY FOR UPKEEP OF THE DAMS AND PUT THE MONEY IN SOLAR.

Thanks, Brian! – Mike Conley (the guy with the glasses and grey hair, in the video 🙂 http://www.RoadmapToNowhere.com

They make fine arguments if you neglect to keep in mind the absolute FATALLY TOXIC nuclear fuel AND ITS WASTE. What do they propose to do with all the muke waste? Maybe they’ll toss that crap into the public water like the aluminum industry does with fluoride, getting the idiots to believe its good for teeth or something. So they go on and on about MSR’s, but again…the toxic crap that runs them if gotten out into the environment wreaks REGIONAL HAVOK for….ever. What is their exit plan from the toxic world they create to make 1.5ish TW total grid… Read more »