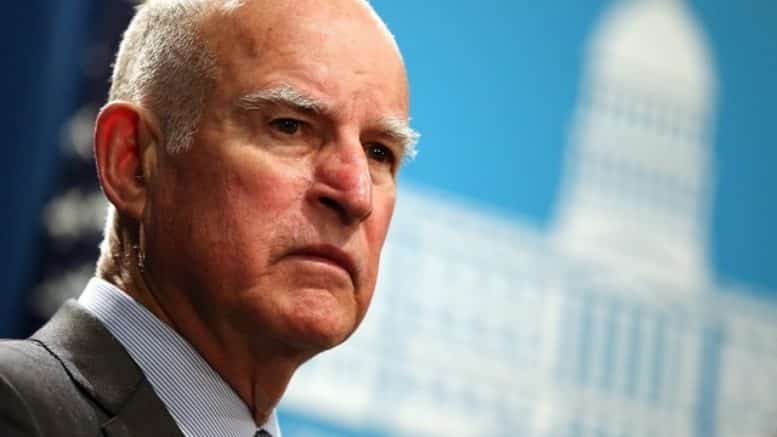 As ex-Governor of California, Jerry Brown is seeking to solidify his legacy as an ecology crusader, but every time he opens his mouth, more ignorance and foolishness pours forth. Dr. Tim Ball explains how. ⁃ TN Editor

Jerry Brown, the recently retired California Governor, is a new form of technocratic politician. His technocratic skill is as a professional politician. Like most in politics today, they seek office because they fail at everything else, but still, want to control everyone. They are masters at getting and staying elected. Fortunately, a portion of politics requires occasional public exposure to further their control. It means they must expose themselves with public statements. At this point the old French adage becomes appropriate. The higher up the tree the monkey climbs, the more he shows his backside.

They try to control the message and are aided and abetted by the mainstream media. At that point, they become vulnerable to Marshall McLuhan’s famous observation that “The medium is the message.” My own example involved a TV station wanting ideas for a program. I sent many, but they rejected most saying, they don’t lend themselves to television. This is why virtually the only way to ‘show’ pollution is with chimney stacks belching out something. I say something, because, in North America at least, it is now mostly steam.

Recently, Brown was forced to expose himself as he left one political office and prepared the ground for another. He tried to control it but exposed enough of himself to ask if a world leader could display more ignorance in a single interview. The good news is it resides on the Internet for the world to see and analyze. It explains why he was a disaster as Governor and people are rioting across the world against such leadership failures. Brown said,

“I would point to the fact that it took Roosevelt many, many years to get America willing to go into World War II and fight the Nazis. Well, we have an enemy, though different, but perhaps, very much devastating in a similar way. And we’ve got to fight climate change. And the president’s got to lead on that.”

His reference to the Nazis was very appropriate but not because of the delay in US commitment. Normally, as Kerry Jackson noted

Generally speaking, the first person in a debate who compares their opponent to Hitler or the Nazis at that moment loses the argument.

When the Third Reich is invoked, it’s usually clear evidence that that person’s position is so weak that they have had to resort to a gross misrepresentation of the other’s position.

Brown took the risk for political advantage for the reasons Jackson identified. He had to divert attention from his economic and social failures as Governor if he wants a political future. Ironically, he identified the forest fires in California as justification for his view of climate change. In fact, that is further proof of his failure. Fires are natural and necessary everywhere, including California. They were made worse because of his forest management policy that stopped controlled and managed fires. As a result, debris built up and the fires, which continued to occur naturally, were more intense and damaging.

However, first let’s look at the Roosevelt comment. It helps if a liberal can align himself with one of the most liberal Presidents in US history. There was a reason Roosevelt delayed entering World War II. Why would Americans commit to defending colonial powers in Europe who exploited them and many other parts of the world for centuries? It was a position similar to Obama’s anti-colonial foreign policy. There were also emotional scars. US total military deaths were 116,516 in World War I just 20 years earlier, and there was little evidence Europe learned its lesson. Roosevelt didn’t hesitate to declare war on Japan after Pearl Harbor because the attack was on America and Americans.

Brown’s view only sounds plausible because he now knows that when America did commit, they did so effectively and exposed the true nature of the Nazi regime. It is another case of 20/20 hindsight.

Why and what is Brown saying as he loses power? Sorry, I meant to say as he leaves office. Brown is attempting to determine his legacy, to make excuses for his economic and political failures. He is apparently laying the groundwork for a presidential bid in 2020 and what better basis, than the environment and its subset climate change. He is apparently trying to align himself with the millennials who have taken over the Democratic Party. His reference to failing to deal with climate change is like failing to deal with the Nazis, was already identified by a millennial socialist, Alexandra Ocasio-Cortez.  He admitted he failed to get Trump and others to do more, and he had not done enough on climate change.

“No, not enough, not even close, and not close in California, and we’re doing more than anybody else, and not close in America or the rest of the world,” Brown said. “The technology, the investment, the lifestyle changes, the land use changes, this is a revolutionary threat. And we’ve got to get off this idea, it’s the economy, stupid. No, it’s the environment. It’s the ecology that we have to get on the side of. And we only do that with wisdom, with investment, and widespread collaboration and working together.”

Keep those ideas in mind. I became aware of the use of the environment by the Nazis when working with Sheila Zilinsky and writing a foreword for her book Green Gospel; The New World Religion. It led me to other books, especially the 2005 work, How Green were the Nazis? Nature, Environment, and Nation in the Third Reich. This led me to a valuable website Nazi Germany and the Environment, with extensive explanation and direct quotations from the period.

“Man must not fall into the error of thinking that he was ever meant to become lord and master of Nature. A lopsided education has helped to encourage that illusion. Man must realize that a fundamental law of necessity reigns throughout the whole realm of Nature and that his existence is subject to the law of eternal struggle and strife. He will then feel that there cannot be a separate law for mankind in a world in which planets and suns follow their orbits, where moons and planets trace their destined paths, where the strong are always the masters of the weak and where those subject to such laws must obey them or be destroyed. Man must also submit to the eternal principles of this supreme wisdom. He may try to understand them but he can never free himself from their sway.”

Wow, a classic statement by a modern environmentalist. NO. It is a quote from Hitler’s infamous book Mein Kampf (My Struggle). Hitler wrote the book while in jail for social activism including a planned coup. He realized he went too far so became a model prisoner with special privileges, including the creation of the book. As the prison governor wrote,

“Hitler has shown himself to be an orderly, disciplined prisoner, not only in his own person, but also with reference to his fellow prisoners, among whom he has preserved good discipline. He is amenable, unassuming, and modest. He has never made exceptional demands, conducts himself in a uniformly quiet and reasonable manner, and has put up with the deprivations and restrictions of imprisonment very well. He has no personal vanity, is content with the prison diet, neither smokes nor drinks, and has exercised a helpful authority over other prisoners.”

He was a professional politician. It didn’t take him long after his release to start fomenting riots and hatred such as the infamous Kristallnacht when Nazis stormed through the streets openly attacking Jews and Jewish businesses. He was behind the burning of the Reichstag, home of the German parliament. He blamed the communists, but many knew what was going on. These actions appealed to many Germany people, but many did not approve. As a child in England, my parents owned a small-holding. With the demands for food created by the war, the government ordered the land become productive. They didn’t have all the expertise or enough time. Early in the war, a German prisoner of war was brought every morning to help. We learned he was a 40-year old jeweler in Berlin who hated Hitler. Drafted into the German Army, he took the only escape possible. At the first opportunity, he surrendered to the British forces and gambled they would win. His gambled paid off. After the war, my parents visited him in his new jewelry store in Berlin.

Hitler realized he needed to step back as he had done in prison. He was scaring the population and resorted to a standard diversionary tactic of the left – the environment. As Jurriaan Maessen explained in 2009,

Once Hitler consolidated his position and that of his party, the true face of Nazism had to be masked somewhat to appease the people who generally desired an age of peace instead of another disastrous World War.

The author of the 2005 book How Green were the Nazis?: Nature, Environment, and Nation in the Third Reich explained.

“The Nazis received a warm welcome by the existing environmental organisations as there was ‘an ideological overlap between Nazi ideas and conservationist agendas.’”

Once in full control, it didn’t take long for Hitler to abandon the charade.

The people of Germany understood, like the people today, that environmentalism is a necessary paradigm. It doesn’t make sense to soil your own nest. What they don’t like is when people exploit such necessary policy for political power. They also don’t like it when unnecessary policy, such as that to deal with climate change, is exploited. When you create a lie on which to create a career, as technocratic professional politicians must do because it is their only skill, you live and die with that lie.

Dr. Tim Ball is a renowned environmental consultant and former professor of climatology at the University of Winnipeg. He has served on many local and national committees and as Chair of Provincial boards on water management, environmental issues and sustainable development. Dr. Ball's extensive science background in climatology, especially the reconstruction of past climates and the impact of climate change on human history and the human condition, made him the perfect choice as the Chief Science Adviser with the International Climate Science Coalition.
1
0
0
0
Subscribe
newest oldest most voted