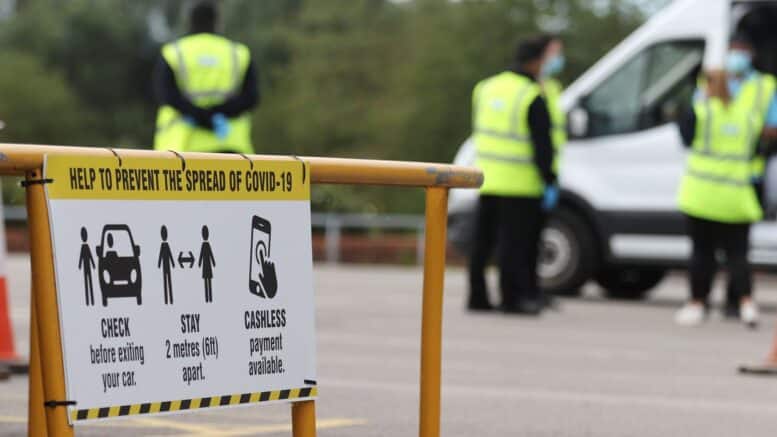 Please Share This Story!
PDF 📄
“Your papers, please.” This is a chilling breakdown of personal data privacy, giving the police unprecedented and sweeping access to health data across the UK. This is also happening in the U.S. with Google and Oracle’s tracking vaccine recipients.

The total breakdown of personal data privacy is almost complete. Your most private and intimate details are shared among government entities, including police, as well as with Big Tech companies. This is how the scientific dictatorship of Technocracy will control every citizen, and mostly via AI algorithms. ⁃ TN Editor

British police forces have been granted access to details of people who have been told to self-isolate under the government’s ‘test and trace’ system, the Department of Health and Social Care (DHSC) said late on Saturday.

A spokesman for the department said it agreed with the National Police Chiefs Council (NPCC) that officers could have access on a case-by-case basis to information on whether a specific individual has been notified to self-isolate.

“The memorandum of understanding ensures that information is shared with appropriate safeguards and in accordance with the law. No testing or health data is shared in this process,” the spokesman said in an emailed statement.

The development was reported earlier by Sky News, which also cited an NPCC statement saying police will continue encouraging voluntary compliance but will enforce regulations and issue fixed penalty notices (FPN) when needed.

“Where people fail to self-isolate and refuse to comply, officers can issue FPNs and direct people to return to self-isolation. Officers will engage with individuals to establish their circumstances, using their discretion wherever it is reasonable to do so,” the NPCC statement said.

Cannot wrap my head around WHY it is that people aren’t ‘up in arms’, with ‘torches & pitchforks’ in hand, and putting an END to all of this?! This would have been the Nazis wet dream, what is happening around the world!! So, before/during/after WW II, people around the globe were HORRIFIED at EVERYTHING the Nazis were doing….’TO WAR WITH GERMANY WE GO!!!’. And yet, it seems to be JUST FINE when people’s own governments do these things TO THEM???? If ones SELF-PRESERVATION does NOT kick in?……..you are NO LONGER HUMAN!! Just boggles the MIND!

I totally agree with you. I do not know why “the people” have not risen up en masse to object, resist the tyrants!! I do not know why doctors have not stormed Congress and demanded that federal “public health” agencies cease and desist with the fake information and draconian false, confusing and deliberately opaque information given to the people, and them, regarding this seasonal flu. People are tired of being scared out of their wits by their own government regarding this virus that is far less fatall than many other diseases and now treatable. WE are the government. Yes??

There’s even a bill in the United Kingdom, that lets police and government agencies commit crimes when “necessary” for anything.

Anyway, Patrick Wood, what a good website; who would rather suffer or even die from anything than listen to you, let alone join you?

Why not an online section for poetry, that exposes the evils of scientific dictatorship?
The Society of Classical Poets has poetry exposing the evils of communism and various derivations thereof.