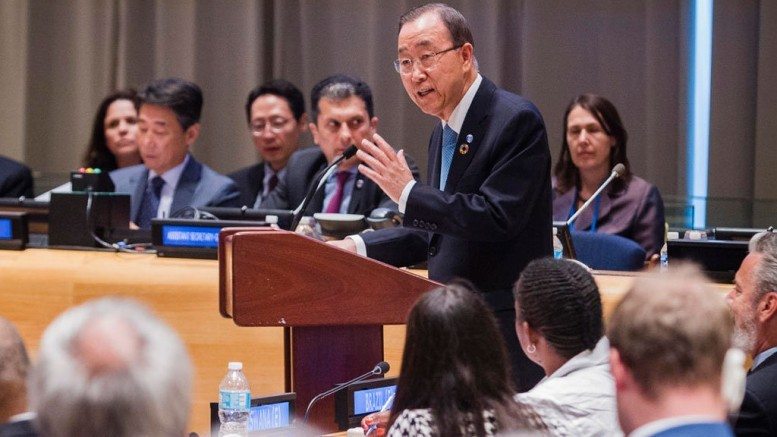 H.E. Mr. Ban Ki-moon, Secretary-General of the United Nations, addresses the chamber. Ministerial Segment of the High-level Political Forum on Sustainable Development Goals Theme in 2016: Ensuring that no one is left behind. (UN Photo/Manual Elias)

Technocracy requires monitoring in order to control, and as in any good project, progress must be clearly represented to everyone knows how the technocrat processed are working. The UN is no exception, since Sustainable Development is nothing more than warmed over Technocracy from the 1930s. ⁃ TN Editor

Launching the first-ever Sustainable Development Goals report on the new global development agenda adopted last year, Secretary-General Ban Ki-moon today said that the 15-year undertaking is “off to a good start” but will require all parts of the UN family and its partners to work together.

“We have embarked on a monumental and historic journey,” the Secretary-General told the UN High-level Political Forum on Sustainable Development (HLPF), which opened on 11 July and ends on 20 July, at the UN Headquarters in New York.

“We must all learn, in national governments, in local authorities, in business and civil society, and also at the United Nations, to think differently,” he said, also underscoring the need to break down silos, not only between the economic, social and environmental aspects of development, but also between government institutions, between different levels of government and between the public and private sectors.

With his speech, Mr. Ban launched the first SDG report, which will serve as a benchmark for the 15-year implementation period of the 2030 Agenda.

“It provides an accurate evaluation of where the world stands on the 17 Goals, using data currently available to highlight the most significant gaps and challenges,” he said.

“We are off to a good start,” he added, calling on the international community to “pledge never to rest until we have achieved a world of peace, dignity and opportunity for all.”

The latest data shows that about one in eight people still lives in extreme poverty and nearly 800 million people suffer from hunger, the top UN official said. The births of nearly a quarter of children under 5 have not been recorded, and 1.1 billion people are living without electricity, and water scarcity affects more than 2 billion.

The data also underscore the imperative of targeted action in support of the furthest behind, he said, stressing the importance of data and indicators on all groups, especially those that are often unaccounted for.

“The SDGs address the critical challenges of our time,” he said, including immediate action on climate change.

The UN chief said he will convene an event on 21 September for countries to deposit their instruments of ratification on the Paris Agreement on climate change, an accord that was adopted in December last year and will enter into force when 55 countries ratify, and 55 per cent of global greenhouse gas emissions are accounted for.

In April, 178 countries signed the Paris Agreement at the UN Headquarters, and 19 countries have so far ratified. But these 19 countries accounted for less than 1 per cent of greenhouse gas emissions.

Mr. Ban encouraged at least 40 countries who committed that they will ratify this Paris Agreement before the end of this year, including the United States, China, Australia, Indonesia, Mexico, and Argentina.

He noted that a key feature of this year’s Forum is the voluntary national reviews, a mechanism that allows Governments to voluntarily present what they and their societies are doing to implement the 2030 Agenda. This year, 22 countries will share their experiences.

“Ensuring progress in achieving the SDGs will be greatly enhanced by making sure that lessons are shared and best practices are replicated,” he explained, calling on Member States to intensify efforts at follow-up and review through a participatory process, with the full engagement of the business sector and civil society.

Thomas Gass, UN Assistant Secretary-General for Policy Coordination and Inter-Agency Affairs and Francesca Perucci, Chief of the Statistical Services Branch in the UN Department of Economic and Social Affairs will brief reporters on the report tomorrow morning in New York.

Also today, Mr. Ban met with Erna Solberg, the Prime Minister of Norway. They discussed issues related to the High-level Political Forum on Sustainable Development, as well as climate change, and movements ofrefugees and migrants.

On the sidelines of the High-level Political Forum, Mr. Ban also met with Lubomir Zaoralek, Foreign Minister of the Czech Republic, to whom he stressed the importance of national ownership of the 2030 Agenda. The two leaders also discussed the situation of refugees and migrants, the Syria conflict, preventing violent extremism and climate change.