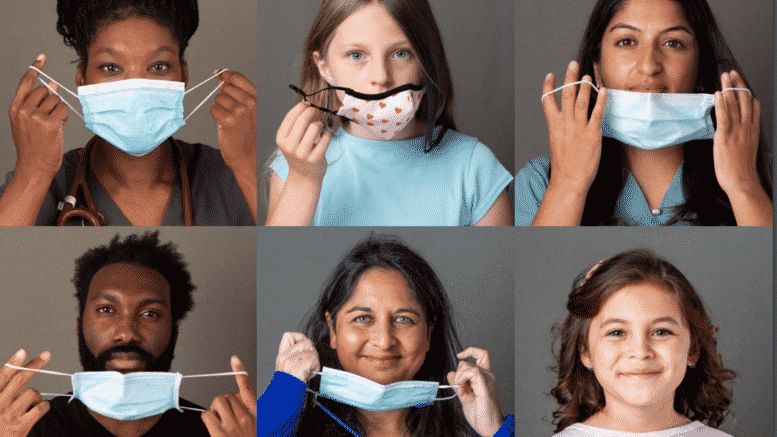 Photo from the new WHO report, 'COVID-19: Make it the Last Pandemic'

Posted By: Kenton Biffert and Paul Smeaton via LifeSite News May 20, 2021

Please Share This Story!
PDF 📄
How thinly veiled can blackmail and extortion get? The totally corrupt World Health Organization is calling for global surveillance, authority and billions more in funding in order to ensure that there won’t be pandemics in the future.

If the WHO has the ability to stop future pandemics, then they could have stopped the current one. Or, did they create this one in the first place? This is a straight-forward shakedown of the entire planet, reminiscent of mobsters in Chicago who would approach a store owner and say, “For a mere $500 per week, we will protect your store from burning down like Mr. Jones’ experienced down the street.”

The 7 recommendations from the WHO are:

The authors of this article recognized the importance of the cited UN report, but were unable to find much commentary. I was pleased to be able to contribute my thoughts. ⁃ TN Editor

The World Health Organization (WHO) has released a report calling for greater authority for itself in countries around the globe, a global surveillance system, as well as billions more dollars in financing for itself.

In a report released this month entitled, COVID-19: Make it the Last Pandemic, a group called the “Independent Panel” established by the WHO, analyzed the global response to the Wuhan Virus and delivered a strong message for international changes.

They state, “Our message is loud and clear: no more pandemics.  If we fail to take this goal seriously, we will condemn the world to successive catastrophes.”

“On the basis of its diagnosis of what went wrong at each stage of the COVID-19 response, the Panel makes […] seven recommendations directed to ensuring that a future outbreak does not become a pandemic. Each recommendation is linked directly back to evidence of what has gone wrong. To be successful they must be implemented in their entirety.”

The panel is co-chaired Rt Hon. Helen Clark, former Prime Minister of New Zealand and H.E. Ellen Johnson Sirleaf, former President of Liberia and Nobel Laureate and includes eleven other professionals from around the world.

Patrick Wood, Editor in Chief of Technocracy News told LifeSiteNews that, were the recommendations of the report to be implemented, “the top political leaders of each nation would become the puppets of the WHO, whenever it decides to declare a pandemic.”

“The WHO is not and never has been independent,” Wood continued. “Rather, it is a key agency of the United Nations and subservient to its ideology. It seeks additional authority over nations and needs money to accomplish it. Nobody prevents a virus from spreading, so the call for more funding is spurious at best. After contributing to the current crisis, they want to prevent the next one?”

Wood told LifeSiteNews that “total surveillance” is  “the holy grail” of the “sustainable development” agenda, which he says can also be described as the “technocracy” agenda.

“This is a fast-track conduit/supply chain for Big Pharma to push its gene therapy shots and vaccines to a generally uninformed global citizenry,” Wood added.

The panel of eleven is far from “independent”. Two are associated with the elitist Trilateral Commission, two with United Nations agencies, one member of the Communist Chinese Party who was a principal in the COVID outbreak in China and all are UN ideologues. To my knowledge and study, when the United Nations calls for “independent” or “high level” panels, they are signaling the exact opposite. Those elitist/ideologues who populate such panels always and only promote one thing: Sustainable Development in all its forms and control over society.

Working together since September 2020, the panel says that it has “examined the state of pandemic preparedness prior to COVID-19,” as well as the global responses to COVID-19.

The world cannot afford to focus only on COVID-19. It must learn from this crisis, and plan for the next one. Otherwise, precious time and momentum will be lost. That is why our recommendations focus on the future. COVID-19 has been a terrible wake-up call. So now the world needs to wake up, and commit to clear targets, additional resources, new measures and strong leadership to prepare for the future. We have been warned.

In a 7-page summary document of the full report, the authors of the report state that “the initial outbreak became a pandemic as a result of gaps and failings at every critical juncture of preparedness for and response to COVID-19.”

According to the summary report these failings included “inadequate funding and stress testing of preparedness, despite the increasing rate at which zoonotic diseases are emerging.”

The authors of the report say that China was “quick to spot unusual clusters of pneumonia of unknown origin,” but that the procedures under the International Health Regulations were much too slow. Further, countries did not act quickly enough with an “aggressive containment strategy,” but rather took a “‘wait and see’ approach.”

As the virus spread, the WHO, trying to support the countries with advice and guidance, found that “Member States had underpowered the agency to do the job demanded of it.”

“Preparedness was underfunded and response funding was too slow,” they say. The result, they explain was “widening inequalities” in regards to the “impact on women and vulnerable and marginalized populations.”

This is the same WHO which laced tetanus shots going to thousands of African women with sterility drugs that made them become sterile.
What do you suppose The WHO would lace other drugs with?

They would lace everything and anything with whatever Bill “Eugenics” Gates had planned from 30 years ago to depopulate the earth while claiming the injections are for the health of the people! What a crock of crap and yet the world fell for it. It is pathetic to think that no one was trying to stop the destruction of entire nations of people like the Africans and the Indians. Then they will come for the Whites!

Sounds about right to me and right on time in my estimation. The WHO (UN’s bitch), seeks decisive totalitarian authority over every country/State in the world? Talk about balls. The WHO can guarantee pandemics will stop IF they receive extreme funding (extortion) to do so along with their new powers. Hey, WHO/UN, listen up. Would that be the next phase of your planned release program to kill the more of us if we do not cooperate? Well, on one thing the WHO and I do agree. Their Panel’s message is crystal clear. The criminal, predatory participants are peddling the usual… Read more »

WHO: Give Us Total Control And COVID Will Be ‘The Last Pandemic’ – David Icke

The WHO should appropriately rename itself the WDADO (World Disease And Death Organization. Sounds like another veiled threat to me, “give us total control and covid19 will be the last pandemic.” Say what? The WHO’s last pandemic statement sounds very similar to Joe Biden’s recent statement about the unvaccinated will pay a price for rejecting the covid jabs. Last time I looked. People were/ are paying a price for covid19 since it’s arrival whether they were supposedly vaccinated against it or not. There appears to be a price to pay whether you contract and spread covid19 or not. I’m not… Read more »

This is nothing more than a protection racket. Just like in the days of the mob. You are the owner of the shoe store down the block. One day a huge butthole comes in with a couple of butt wipes at his side and he says’. Every week I will come by to collect my $500 fee. You say for what? He says for protection. I will make sure nothing happens to your store. He says the drug store 2 blocks away refused to pay and his store was firebombed. So you pay becauase you don’t want the same thing… Read more »

Coronavirus Achilles Heel Now let me save your lives from Coronavirus, before it gets to be Covid. Mix 1 heaped teaspoon of salt in a mug of warm water, go into your bathroom, cup a hand, pour some of the solution into your hand and then sniff or snort that lot and the mugful up your nose, spitting out anything which comes down into your mouth. No reaction up there, you don’t have the virus yet, so blow out your nose and flush away, washing your hands afterwards. You have a sore reaction, that is the salt murdering the Coronavirus… Read more »