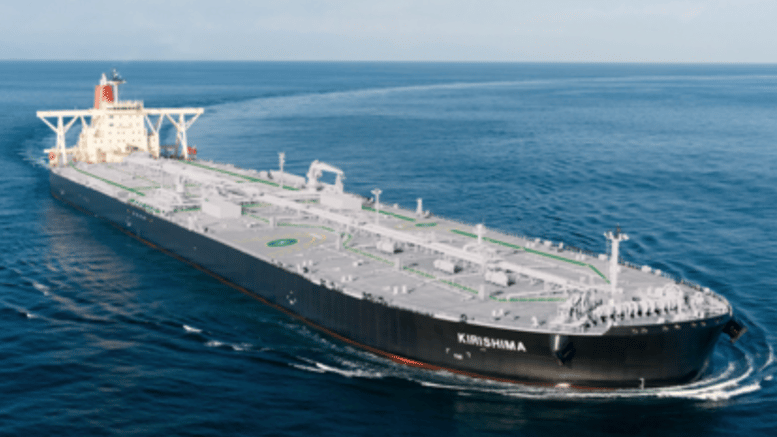 Please Share This Story!
PDF 📄
The Great Reset is being accelerated by destroying flows of energy to the global economy. That US energy reserves could be sent overseas proves, despite our own domestic emergency, the point is made of who is in charge of our domestic policy, namely, global elitist Technocrats who are intent on destroying national entities. ⁃ TN Editor

With a growing number of people realizing that the Biden administration has drained more oil from the US strategic petroleum reserve, which is meant to be used during real emergencies not fake, made up ones such as Democrats facing a catastrophic failure at the midterm elections…

.. more people are starting to ask the next big question: where is this furious liquidation of US black gold going?

Courtesy of Reuters we know: more than 5 million barrels of oil that were part of the historic U.S. SPR release were exported to Europe and Asia last month, including top US geopolitical nemesis in the global arena, China, even as U.S. gasoline and diesel prices hit record highs.

The export of crude and fuel is blunting the impact of the moves by U.S. President Joe Biden to lower record pump prices. In a widely mocked call, Biden on Saturday renewed a call for gasoline suppliers to cut their prices, drawing rightful criticism from Amazon founder Jeff Bezos, because going after mom and pop gas stores merely demonstrates just how clueless the handlers of the senile presidential puppet truly are.

About 1 million barrels per day have been drained from the Strategic Petroleum Reserve through October, an unprecedented pace. The drain means SPR inventories fell to the lowest since 1986. US crude futures are above $100 per barrel and gasoline and diesel prices above $5 a gallon in one-fifth of the nation. US officials have said oil prices could be higher if the SPR had not been tapped, and for once they are right. Still, the question looms of what happens to oil prices when the US can no longer sell the SPR amid concerns of a real emergency: we know the answer and the Biden admin won’t like it.

Citing customs data, Reuters traced that the fourth-largest U.S. oil refiner, Phillips 66 shipped about 470,000 barrels of sour crude from the Big Hill SPR storage site in Texas to Trieste, Italy. Trieste is home to a pipeline that sends oil to refineries in central Europe. Meanwhile, Atlantic Trading & Marketing (ATMI), an arm of French oil major TotalEnergies, exported 2 cargoes of 560,000 barrels each. Cargoes of SPR crude were also headed to the Netherlands and to a Reliance refinery in India, an industry source said.

What is most notable is that a third cargo headed to US arch-enemy, China, which is now directly benefiting at the expense of US consumers as a result of Biden’s escalating panic to undo the consequences of his catastrophic green policies by selling the most valuable US assets directly to Beijing!

But what is even more scary is the following exchange, in which the White House simply had no response when asked if the US is selling its emergency reserve oil to China.

Is China really our enemy, or just another “partner” in the coming global hegemony??

China was “allowed” to become a manufacturing powerhouse, by the entities who were enriched by offshoring American Tech to destroy unions and prepare for our demise. I remember my parents generation, who were forced to train their Chinese counterparts in order to receive any severance packages, if they refused to train, they were fired immediately. Bruce Springsteen’s “My Hometown” was the epitaph for America’s manufacturing, as was John Mellencamp’s “Blood on the Scarecrow” the epitaph for America’s family farmers to make way for Big Ag to consolidate and further promote GMO crops into American bodies. In the end everyone lost.… Read more »

I also sadly remember grown men and women, dedicating the greater portion of their lives, building and manufacturing things with pride in their voices, ending up broken and jaded working in the very same designated Chinese goods clearing houses of Wal Mart, Target, etc.,and now Amazon, with a quarter of the pay they used to enjoy, and watching the service economy bleed what was left of an industrious generation, into obscurity and disillusionment.

Good question. US leftists would love for the US government to be modeled after China. They never express condemnation for anything that the Chinese government does. They even conspire to keep US citizens sick and diseased importing Chinese toxic medicines.

More treachery as usual. Seems to me that China could have bought oil from Russia. If the other nations hadn’t followed Biden and Company’s stupid sanctions against Russia. Those countries could have probably continued to buy oil from Russia in their currencies. It’s apparent that the powers that be will force the rest of us into abject poverty if they have their way.