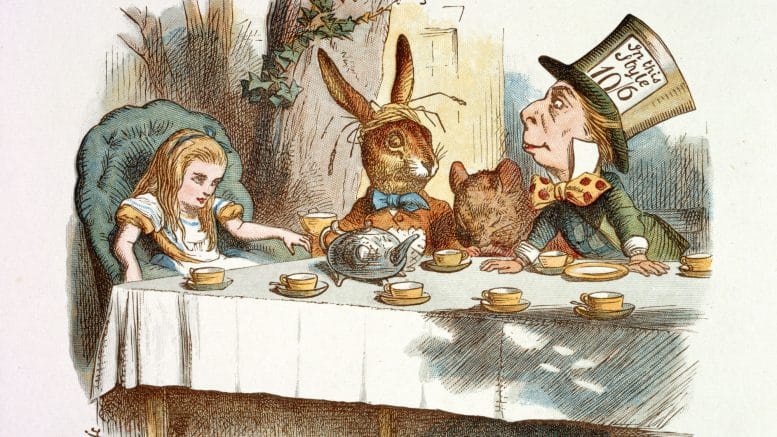 The negative impact of academic speculation over the last 150 years cannot be overestimated. It has led humanity around by a ring in its nose, from pointless argument to pointless argument. This is the infertile soil that produced systems like Technocracy, Sustainable Development and Global Warming. ⁃ TN Editor

The headline said, “Polluted Air Can Cloud Your Morality, Lead to Unethical Behavior.” It is a classic of ‘reporting’ in today’s age of speculation. It’s also typical of today’s academic rubbish given credibility by a sensationalist media. The origin of the story was an academic article in Psychological Science, the journal of the Association for Psychological Science. Because of that, it is a good model to explain what is wrong with it, how it was done, and how the practice developed. The damage caused by misleading society, not to mention the trillions of dollars wasted on meaningless research requires drastic remediation. (An interesting event occurred when using a grammar checker on my article. It suggested I replace ‘academic’ with the word ‘scholarly.’ Ironically, that is the entire thrust of this article. In practice, they are not the same at all.)

The academic article proves nothing. It is of no consequence to anyone other than those who produced it. The majority of what universities produce or do in all faculties is similarly irrelevant to the real world that supports them. A majority of the university production is irrelevant, but it is worse in the newest faculty on campus, the social sciences.

There were only two faculties at 19th century universities, the Natural Sciences and the Humanities. That began to change in 1859, the year Darwin published The Origin of Species. Darwin knew the limitations of his work and was reluctant to publish until the work of Alfred Russel Wallace was brought to his attention. Most people are familiar with the social impact of Darwin’s work generally called social Darwinism.  An important example was Herbert Spencer’s comment about “survival of the fittest,” appealed to Darwin, so he included it in the sixth edition

However, there was a very different impact that became more profound. Its impact was great but is little understood by most. Quite simply, the science community used Darwin’s Theory of Evolution to defeat religion. It is why you see books like Richard Dawkins’ The God Delusion or Christopher Hitchens work, “God is not Great,” as part of the modern public debate.

This article is not written to argue for or against religion, but to explain what happens when a major institution in society is essentially removed. The reaction in the academic community and the knock-on for society created much of today’s societies. Darwin’s Theory effectively eliminated God as an explanation for humans existing and being so different than all the other species, including the apes. Wallace said Darwin’s Theory failed to explain the difference and therefore failed.

Darwin attempted to provide an answer in The Descent of Man published 12 years after Origin.   He tried to argue that although no one species could do what humans do, each species could do something. This led to the joke that if you sat enough chimpanzees in front of typewriters, they would eventually produce all the works of Shakespeare.

“Economics is a very species – chauvinistic idea. No other species on earth – and there are may be 30 million of them – has had the nerve to put forth a concept called economics, in which one species, us, declares the right to put value on everything else on earth, in the living and non-living world.” 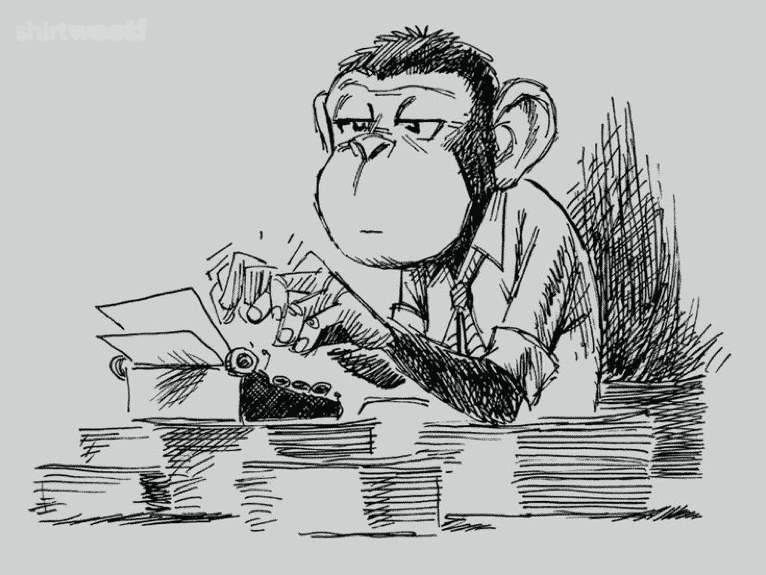 It doesn’t take nerve to do it, it takes intellect. Suzuki is also wrong about the number of species and the idea of placing values on things. All animals do it. The difference is all other animals only have one value, whether it is edible or not. There are no other species that could even imagine economics or any other discipline.

This idea is a natural lead into the impact of Darwin’s Theory because Economics is just one of many disciplines, like Anthropology, Sociology, and Political Science, collectively called the Social Sciences. It is now the largest faculty in most universities. It exists solely to replace God’s explanation for humans being here and so different from all other animals. I call it collective human navel-gazing. It adds nothing to explain why humans are so different.

The trouble is what they claimed to know had already evolved from experience and common sense. Sadly, there is no university in the world that offers even a half credit in it. After coming into the university system as a 30-year old mature student and then teaching for 25-years, I learned that they would need someone from outside to teach it. As Prince Philip, in a rare wise observation, said, universities are the only truly incestuous systems in our society.

The only skill these social scientists (a term which in itself is a contradiction) developed were the abilities to speculate and create non-existent problems to produce more research money to further their careers. J. Scott Armstrong asked the question “Does an Academic Research Paper Contain Useful Knowledge?” His findings are disturbing but not surprising.

I conducted an analysis to estimate the percentage of published papers in forecasting that contain useful knowledge (Armstrong and Pagell 2003). We defined useful knowledge as evidence that could contribute to better decisions than would have otherwise been made in given situations. We concluded that only 3% met this definition. My opinion, supported by an analysis of literature in marketing (Armstrong 2003), is that the percentage of useful papers in marketing is even lower.

I suspect that most of that 3% are people who use the data for their own career -enhancing paper.

Now let’s examine how these papers are produced. They start with a bias and then set up a study to prove it. In the article mentioned at the start,

They justified their credibility and bias by referring to previous studies. The implications of this are that they are just confirming and furthering what others established.

“Our findings suggest that air pollution not only corrupts people’s health, but also can contaminate their morality,”

The first problem of any study or even a simple discussion is the definition of terms. As Voltaire said,

“If you wish to converse with me, define your terms.”

Then, they commit the cardinal sin of research by claiming a correlation is conclusive evidence. My favorite example for the classroom was that Diet Coke causes obesity. Research shows that more obese people drink Diet Coke than any other group.

The authors of the moral behavior study assume that the subject’s reaction to visual images of air pollution was the cause of the change of behavior. There are many other explanations most of them more logical than the tenuous claims of the study. Our senses are designed to inform us and allow us to react, so of course, the subjects reacted to visual signals. The nature of the group, which is naturally biased, will predetermine results. Aren’t low-income areas always around industry because land is cheap and poor paying jobs are available? All surveys or polls are taken by people willing to do them.

For example, a similar correlation study between climate and crime claimed that crime rates increased when the Santa Ana winds blew in California. That’s the correlation, but the cause and effect were that in low-income areas people, who can’t afford air conditioning, leave their windows and doors open inviting crime. They spend more time outdoors and drink much more beer, thus increasing the potential for conflict.

In the study we are discussing, a second part explains what is really happening.

Another experiment sought to verify the link between anxiety and air pollution. Participants were shown photos from Beijing, with some images depicting notably smoggier scenes and others showing much cleaner views of the same area. The individuals were tasked with writing essays about what they thought it would be like to live there. Later, specialists measured the essays for anxiety. Sure enough, those who imagined themselves living in the cleaner areas displayed lower levels of anxiety in their essays compared to people who wrote about living in polluted areas.

Apart from the problem of objectively determining a subjective level of anxiety from an essay, there is the obvious analysis. Only an academic would claim such ability and, only an academic would think the outcome significant. Of course, anxiety changed, humans are designed and programmed to respond with an increased level of anxiety because they need a coping strategy. It’s called survival.

The phrase “sure enough” is appropriate because all of these studies fulfill the comment I heard years ago about Sociology and Psychology. They try to prove with statistics, which presumably makes it scientific, what your grandmother already knew.

Perhaps the best example of the failure of a social science to resolve anything is anthropology. The entire discipline is devoted to showing how humans are different from the other apes. They decided what made us different was the ability to walk upright, so we became Homo erectus. The distinction wasn’t enough because other apes could walk upright, albeit for short stretches.

The next distinction was our ability to make tools, so we became Homo habilis, but then Jane Goodall discovered chimpanzees making tools.

The next category began to confront the real factors that make humans different. It involves our ability to think conceptually, that is to take two ideas and combine them to create a third, basic problem-solving. This requires wisdom, so we became Homo sapiens, the Latin for wise. Then, studies involving chimpanzees saw them drag boxes from the side of a high-ceilinged room to climb up and reach bananas hanging from the ceiling.

This posed a real challenge. What was left? It is hard to imagine, but they decided what made us different is our ability to tell lies. Since this requires a double concept, you have to think of the truth then a way to bypass it, we became Homo sapiens sapiens – the doubly-wise ape. Then this idea was challenged when watching a gorilla through a one-way glass they saw it break a toy. Using the 300-word sign language skill of the gorilla, they asked who broke the toy. Almost without hesitation, the gorilla pointed at the other gorilla.

In discussions with anthropologists I learned that they are now thinking we are the only animals capable of thinking about death or at least an after-life. As I immediately pointed out, that is where we came in, thinking about an afterlife is central to religion.

After 159 years we have come full circle. All that emerged was an entire faculty, the social sciences, that dragged the level of academic research down and wasted trillions of dollars on speculative research that only advances their careers. Trump is correctly increasing more vocational training. He should pay for it by closing at least 70% of the self-perpetuating, redundant, society damaging, universities. For most students, they are a socially acceptable form of unemployment.

Some of us who are not members of ‘academia’ are still capable of doing fundamental physics and can see thru the absurd ‘physics’ of global warming being poured over the useful idiots including academia.