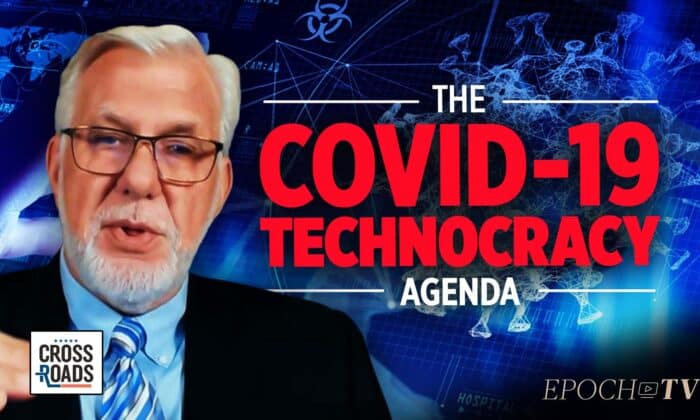 via The Epoch Times

Posted By: Isabel van Brugen and Joshua Philipp via The Epoch Times January 7, 2022

Please Share This Story!
PDF 📄
As Technocracy reveals its iron-fisted tyrannical nature and intentions to conquer the world, the war on Free Speech is their vanguard. When the resistance is silenced, there will be no more resistance and Technocracy will roll over the world at breakneck speed. This is a must-view interview.  ⁃ TN Editor

Americans need to be vigilant and exercise their right to free speech to push back against the social control that has been accelerated by governments across the world during the COVID-19 pandemic, or the nation may fall into a “scientific dictatorship,” according to Patrick Wood, director and founder of Citizens for Free Speech.

Speaking to EpochTV’s “Crossroads” program, Wood said he envisions the United States and the entire world behaving like the Chinese Communist Party (CCP) if free speech is taken away.

“Free speech is the only antidote to what we’re seeing in the world today, to pushing back against it, to resisting it,” said Wood. “The day that free speech is completely crushed—and I think that would be in the case of China, it’s pretty well crushed there for sure—that will be the day when we see the entire world behaving as China behaves right now with in terms of disappearing people, either individually or in mass as that is, you know, larger genocidal issues of just getting rid of people that you don’t like.”

Wood was referring to the mass detention of the Uyghur population in China’s northwestern Xinjiang region. The Uyghur Tribunal, a London-based independent people’s tribunal, on Dec. 9 ruled that the Chinese regime has committed genocide against Uyghurs and other Muslim minorities in the region.

Free speech has always been a natural resistor to tyranny, said Wood, noting that although tyranny has no ability to retreat on its own, free speech may resist the tyranny.

“Without free speech, I can say this for certain … we would be done as a nation, as a people, as liberty and freedom would be done,” said Wood. “Everything we know about the American way would be done. And we would fall into an outright scientific dictatorship.”

“We need to be really vigilant today, and in my opinion, people need to stand up, speak out, get a seat at the table in their local communities and stuff and start pushing back against this stuff.”

He added, “If we cannot speak up now, we will never be able to speak up, if tyranny really falls on us like a plague.”

Wood also claimed that those who are working to instill a system of total social control and are implementing harsh policies in the name of “public health,” are not the leaders of government, but the people “standing right behind them” that are “feeding them the policies that are getting worked out of the society.”

“Case in point, when [former] President [Donald] Trump stood up or when President [Joe] Biden stood up, who stands beside him, but Dr. Anthony Fauci, and maybe some of his cohorts. And you say, well, did these COVID policies come up out of Biden’s head or Trump’s head? No, they have no expertise in that. They came out of the technocrat mind,” Wood claimed, referring to technocracy—a political-economic movement that started in the early 1930s at Columbia University in New York.

The concept of technocracy assumes that price cannot be used to control the abundance of goods because it decreases with the increase of abundance. Therefore a scientific method of balancing production and distribution must be used, according to a 1937 edition of The Technocrat magazine.

“Who has the real power here, it’s not the political system anymore,” Wood continued.

Wood previously told EpochTV’s “Crossroads” that the technocracy idea was introduced to communist China in the 1970s by Zbigniew Brzezinski, a political scientist, co-founder of the Trilateral Commission, and national security adviser to President Jimmy Carter.

That caused a blending of the CCP and communism in general with “this technocratic system of social management, of total management of the economy and the people,” Wood explained at the time.

“If you look deeper you see that there’s a group of people, a core of engineers and scientists, that are working to use high technology to capture the entire society, all of the people in it, and to control and engineer the economic system.”

Wood added: “These giant Big Tech companies that are full of technocrats, they have captured government for their own purposes, but when that purpose is completed, the governments of the world would be absolutely meaningless to these people. They would be the first ones that get thrown out of the bus, in my opinion.”