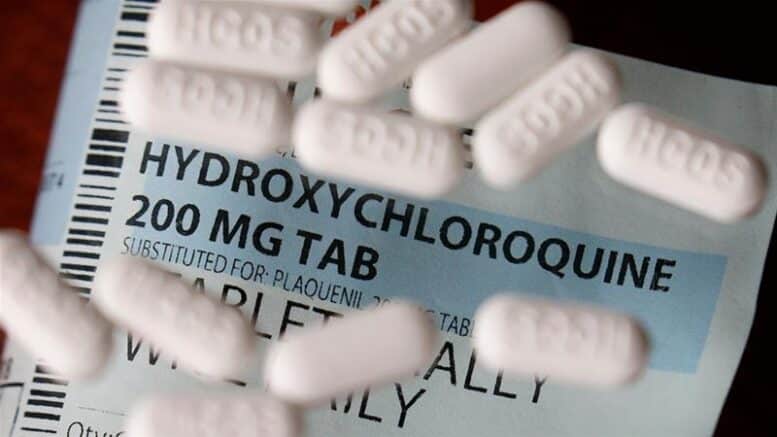 Please Share This Story!
PDF 📄
The modus operandi of technocrat “debate” over Hydroxychloroquine mirrors that of hysterical climate change. Shame, ridicule and marginalize real scientists who attempt to bring the truth to light and call pseudo-science real science.

The suppression of Hydroxychloroquine and chloroquine has cost America tens of thousands of needless deaths and yet the Technocrats behind it will never be held accountable. ⁃ TN Editor

Harvey Risch, professor of epidemiology at Yale School of Public Health, says that hydroxychloroquine is “the key to defeating COVID-19” in a Newsweek op-ed published this past week.

“I am usually accustomed to advocating for positions within the mainstream of medicine, so have been flummoxed to find that, in the midst of a crisis, I am fighting for a treatment that the data fully support but which, for reasons having nothing to do with a correct understanding of the science, has been pushed to the sidelines,” Risch wrote. “As a result, tens of thousands of patients with COVID-19 are dying unnecessarily. Fortunately, the situation can be reversed easily and quickly.”

And it can be reversed by the same medication that has become unnecessarily politicized by the media and the Democratic Party over the past several months.

“When this inexpensive oral medication is given very early in the course of illness, before the virus has had time to multiply beyond control, it has shown to be highly effective,” Risch explained. “Especially when given in combination with the antibiotics azithromycin or doxycycline and the nutritional supplement zinc.”

Earlier this month, a large peer-reviewed study found that hydroxychloroquine cut the mortality rate of COVID-19 by more than half and, contrary to previous claims by faulty studies, had no adverse effects on the heart.

For months the media has ignored both scientific and anecdotal evidence of the drug’s efficacy in treating COVID-19.

The war on chloroquine and hydroxychloroquine began almost immediately after Trump touted it as a potential gamechanger in the fight against the disease. Trump was accused of “practicing medicine without a license” simply for pointing out that the drug showed promise in some small studies. The New York Times even alleged that Trump’s motivation for touting the drug was self-serving because he holds “a small personal financial interest” in Sanofi, even though the drug is out of patent (any pharmaceutical company can manufacture it) and he only owned $29 – $435 in stock as part of a mutual fund.

Because the media and the Democratic Party wanted to use the pandemic to thwart Trump’s reelection, any positive news had to be buried. Trump was accused of offering false hope and “selling snake oil” to the public. A Democratic state lawmaker in Ohio even said Trump should be tried for “crimes against humanity” for touting the drug.

The media gave lots of coverage to studies that associated hydroxychloroquine with a higher mortality rate. In April, the results of a U.S. Veterans Health Administration study on the benefits of hydroxychloroquine as a treatment for COVID-19 were released. The study analyzed the impact of hydroxychloroquine with and without the antibiotic azithromycin and compared that to COVID-19 patients receiving standard care. The VA study found there were “more deaths” among those given hydroxychloroquine than those who just received standard care. However, the VA study wasn’t a clinical trial, but a small, non-peer-reviewed study of patients who were not representative of the entire population, and those with more severe COVID-19 cases were disproportionally administered the drug.

The media was so focused on how they could use the pandemic to undermine Trump’s chances of reelection that they rushed to downplay any sign of hope, which may have prevented the drug from being used to save lives. Anti-hydroxychloroquine hysteria by the media made finding volunteers for studies difficult.

Meanwhile, evidence of the drug’s effectiveness was conveniently and repeatedly ignored. The media ignored a survey of doctors back in May that found an overwhelming majority of them “would prescribe hydroxychloroquine or another anti-malaria drug to a family member” suffering from the coronavirus.

While Hydroxychloroquine may or may not be an apt medicine to treat Covid-19, we all must be aware that it is a DANGEROUS medicine for a certain part of the population, mostly people with darker skin whose ancestors came from regions with endemic malaria. A certain percentage (estimates vary from 5% to 20%) of these people may have favism (or glucose-6-dehydrogenase deficiency, or “G6PD deficiency”), a genetic condition that makes their carriers resistent against malaria, but very sensitive to Hydroxychloroquine. From higher doses, as now recommended, they can die, with symptoms of lack of oxygen.It is astonishing that this generally… Read more »

Dude! Hydroxychloroquine has been around for 65 years and used by tens of millions of people!

Two of my family members have been taking hydroxychloroquine for RA for 12 and 18 years respectively with absolutely no side effects.

There are other highly effective covid19 treatments being suppressed and/or attacked. One is inhaler steroids that were used successfully by March in Japan, Singapore, S. Korea, and Taiwan (7 deaths, pop 24 million). Also in March in Texas, Dr. Richard Bartlett began using inhaler steroid budesonide as early treatment with great success, no deaths, cheap, safe, widely available. See his 4+ million views viral interview from 3 weeks ago. youtube.com/watch?v=eDSDdwN2Xcg  Bartlett has informed Senator Ted Cruz and the White House, and is still trying to get the word out. There’s also the MATH plus protocol pioneered by US intensivist ICU… Read more »

Thank you for posting the link to the YouTube video. It amazes me that there are Doctors who are writing articles about the potential dangers of this modality that are minor compared to dying from COVID-19. It seems obvious to me that there are those who do not want a readily available and affordable treatment for this disease. They would rather push the New World Order agenda onto an unsuspecting world that will push an untested vaccine with nano technology that will alter your DNA forever. Not to mention deposit tiny microscopic machines into your body that only the developers… Read more »

Please note that the Veterans administration used A DEADLY DOSE in their so called test. They used 2400mg per day, on veterans that were just about to die anyway. Not a fair test! 400-600 mg is the proper dose. 2400mg will kill anybody!