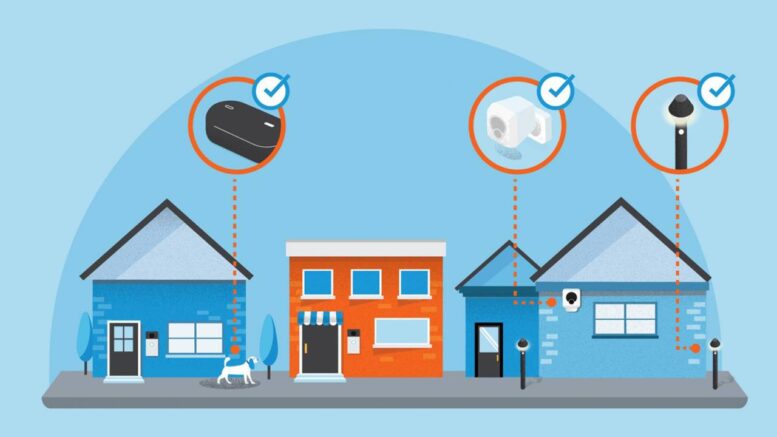 Please Share This Story!
PDF 📄
Amazon is creating a massive spy system by allowing its devices to build city-wide “mesh networks”. If your Internet fails, such devices will automatically link up with and communicate through your neighbor’s units to continue broadcasting information. Opt out NOW! ⁃ TN Editor

Amazon customers have one week to opt out of a plan that would turn every Echo speaker and Ring security camera in the US into a shared wireless network, as part of the company’s plan to fix connection problems for its smart home devices.

The proposal, called Amazon Sidewalk, involves the company’s devices being used as a springboard to build city-wide “mesh networks” that help simplify the process of setting up new devices, keep them online even if they’re out of range of home wifi, and extend the range of tracking devices such as those made by Tile.

But Sidewalk has come under fire for the apparent lack of transparency with which Amazon has rolled out the feature, as well as the limited time available for users to complete the tricky process required to opt out. Other critics have expressed concerns that failing to turn the setting off could leave customers in breach of their internet service provider’s terms and conditions.

“Amazon Sidewalk is a shared network that helps devices work better,” the company said in a Q&A document for users. “In the future, Sidewalk will support a range of experiences from using Sidewalk-enabled devices, such as smart security and lighting and diagnostics for appliances and tools.”

The feature works by creating a low-bandwidth network using smart home devices such as Amazon Echoes and Ring security cameras. At its simplest, it means that a new Echo can set itself up using a neighbour’s wifi, or a security camera can continue to send motion alerts even if its connection to the internet is disrupted, by piggybacking on the connection of another camera across the street. Other devices that don’t need a high-bandwidth connection, such as smart lights, pet locators or smart locks, can use Sidewalk all the time.

But the company’s plans have caused alarm among observers. Ashkan Soltani, a former chief technology officer of the US Federal Trade Commission, told the tech site Ars Technica: “In addition to capturing everyone’s shopping habits (from amazon.com) and their internet activity (as AWS is one of the most dominant web hosting services) … now they are also effectively becoming a global ISP with a flick of a switch, all without even having to lay a single foot of fiber”. The feature may also break the terms and conditions of users’ internet connections, which do not allow such resharing, warned Lydia Leong, an analyst at Gartner.

Users can disable Sidewalk in the settings section of the Alexa or Ring apps, but have until 8 June to do so. After that, if they have taken no action, the network will be turned on and their devices will become “Sidewalk Bridges”.

Question? Is this network link-up only for the devices RING and ALEXA? If not, is there a site online where I can find the point-to-point process of opting out?

Go into your account settings.
I only have ring stick up cameras and the are NOT on the list of spyware.

I do not have Alexa or Ring, can my neighbors link into my internet anyway? and my computer?

I may be safe for now. I don’t have Echo or Ring. Someone told me that it’s on the computer. I do remember seeing those app in ages on my computer. I don’t know if they’re active or not since I never clicked on them. I’d always link to the Amazon web site a web page anyway. It’s certainly prudent to keep an offline computer that no one on the net can hack or snoop into.

Thanks for informing us! How to opt out???

It’ll probably link up with Bluetooth devices regardless if they are Amazon products.