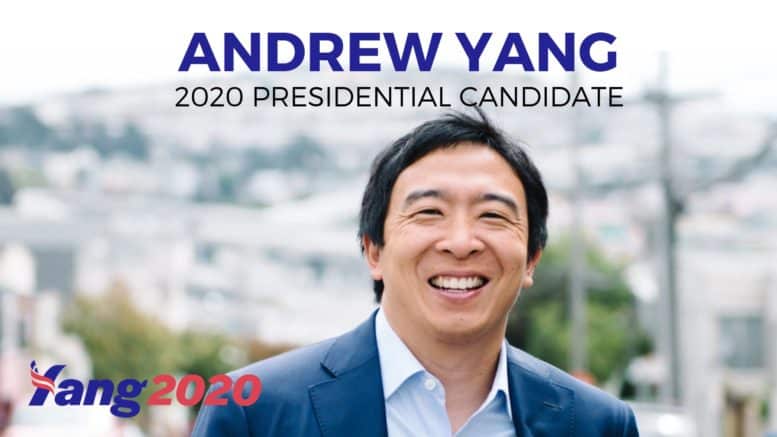 Please Share This Story!
PDF 📄
Universal Basic Income (UBI) is an economic impossibility being sold to ignorant masses as snake oil designed to pacify resistance against the onslaught of automation displacing workers. The sooner people see through this, the better.  ⁃ TN Editor

Tech entrepreneur Andrew Yang is a dark horse contender for the Democratic nomination in 2020 and one of his proposals is getting a lot of attention. His idea is to pay everyone in the United States $1000 per month. It sounds great, right? I mean, who wouldn’t want an extra $1000 per month? I would also add that, perhaps surprisingly, there have been people on the Right like Thomas Paine, Charles Murray, and Milton Friedman who have favored the idea.

Of course, there do tend to be differences between the liberal and conservative versions of universal basic income. The conservative version tends to pay for the whole thing by liquidating most of the other welfare programs. In other words, let’s cut the government agency middlemen out and just give people a certain amount of money. Given the incredible amount of money that the government wastes, it’s certainly theoretically possible that it could SAVE US MONEY if we were willing to cut deep enough,

The UBI is to be financed by getting rid of Social Security, Medicare, Medicaid, food stamps, Supplemental Security Income, housing subsidies, welfare for single women, and every other kind of welfare and social-services program, as well as agricultural subsidies and corporate welfare. As of 2014, the annual cost of a UBI would have been about $200 billion cheaper than the current system. By 2020, it would be nearly a trillion dollars cheaper.

That being said, it would be politically impossible to cut many of those programs and layering it on top of the existing welfare state would defeat the potential purpose of it from the conservative perspective. On the other hand, there’s practically no price tag imaginable that gives liberals pause. That brings us to the first issue with Andrew Yang’s proposal.

The federal government took in $3.4 trillion in taxes last year and ran a $985 billion deficit on top of that, which is in addition to the nearly $22 trillion debt. Now consider that Andrew Yang’s proposal would probably cost more than $2.8 trillion. Yes, a value-added tax (VAT) along with cutting social programs would pay for some of that, but all? Highly unlikely. In fact, by some estimates, Yang’s proposal is coming up $1.2 trillion PER YEAR short of paying for the whole thing. It’s sort of like someone who can’t pay for a mansion on his current income who decides that the solution to that problem is adding a second mansion.

2. It creates a massive new VAT

Andrew Yang is proposing to pay for UBI with a gargantuan new 10 percent VAT to go along with some mostly undefined cuts in welfare programs. In case you are unfamiliar with a VAT, it’s a very popular tax around the world because it taxes products at every stage of development while passing the costs on to consumers. It’s a LITTLE like the gas tax in that respect. You curse the gas companies because gas is so high, but you don’t realize that you are paying much more in taxes than the corporation is receiving in profit. If we end up with a 10 percent VAT that we pay ON TOP OF all the other taxes we have, the safest bet you could ever make would be that the VAT is going to skyrocket in coming years because there is no better way on earth for the government to soak the middle class without people realizing who’s really taking the money out of their wallets.

Additionally, depending on how the VAT is structured, it has the potential to wipe out a lot of the benefits of a UBI. If you get $1000 more per month, but the prices of everything you buy go up significantly because of the VAT, you’re just taking money out of one pocket and putting it in the other.

3. There are few meaningful tests of this proposal

Because this idea has such an enormous price tag, it hasn’t been tested very much in the real world. Probably the most applicable experiment was the one the Canadian government did in Manitoba back in the mid-seventies and it had mixed results. Does giving money to people in African nations like Kenya or Namibia translate to America? Does giving 100 people in Stockton, California, $500 per month tell us anything of use at all? We’re talking about an extraordinarily expensive, radical transformation of how our society works and given the extremely limited amount of data we have to work with, we’d be flying blind through a canyon while trying to do it.