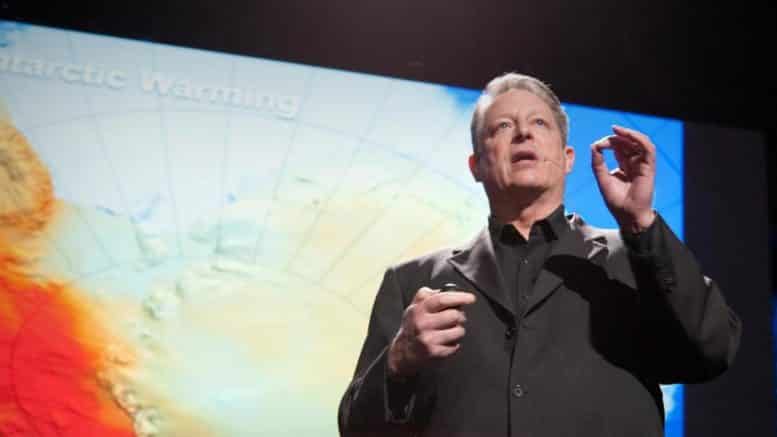 Technocrats Al Gore, the IPCC and the UN are locked in a groupthink death spiral. The UN calls it an ‘ear-splitting wake-up call. Gore declares that Earth’s atmosphere is an ‘open sewer’. Yes, something is ‘loopier’ here, but it isn’t the jet stream. ⁃ TN Editor

Former Vice President Al Gore declared that scientists predicted hurricane “consequences” of climate change and warned “they’re going to get a lot worse still until we stop using the Earth’s atmosphere as an open sewer.”

Gore was reacting to this week’s Intergovernmental Panel on Climate Change report in which 91 authors and editors from 40 countries concluded there’s currently a 12-year window to make “far-reaching and unprecedented changes” to avert dramatic effects of global warming.

UN Secretary-General Antonio Guterres said the report should be an “ear-splitting wake-up call to the world” as “it confirms that climate change is running faster than we are – and we are running out of time.”

Gore told PBS in an interview aired today that “the earmarks of this latest storm… are worth paying attention to.”

“Hurricane Michael intensified as it reached the coast. And that’s something relatively new,” he said. “And the reason for it is, the ocean waters are much warmer than normal, so it’s not getting cold waters churned up to weaken the storm. It just keeps on getting stronger.”

The IPCC and Gore shared the Nobel Peace Prize in 2007. The former VP said sharp warnings the IPCC used in the report “torqued up a little bit, appropriately — how do they get the attention of policy-makers around the world?”

“Even without hurricanes, we get these so-called rain bombs that just devastate the places where it falls,” he said. “…Hurricane Florence and Hurricane Harvey just stayed in place for days and days and days. That’s something new too.”

“And it’s because we’re beginning to see the disruption of wind currents, along with ocean currents. And so the Northern Hemisphere jet stream that normally moves these storms out to the east is getting loopier and wavier and sometimes disorganized. So this is really serious stuff. We have a global emergency. And you use a phrase like that, and some people immediately say, OK, calm down, that it can’t be that bad. But it is.”

The IPCC report said that to keep warming at 1.5°C global net emissions of carbon dioxide would need to fall by 45 percent by 2030 and be “net zero” by 2050. Guterres said “billions of trees” must be planted and coal phased out by 2050.

Gore said the report showed that current global warming “could actually extend to an existential threat to human civilization on this planet as we know it.”

When asked about scientists who don’t support the IPCC climate conclusions, the VP dismissed them as “a few outliers.”