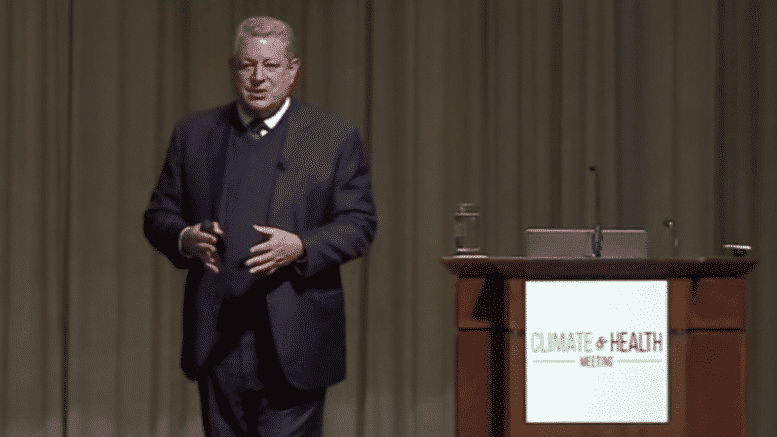 Al Gore is baiting global Islamic forces to fight global warming because it could destroy their holiest cities in the Mideast, like Mecca and Medina. Gore is blatantly reinforcing the Islamic belief that the climate-abusing West is indeed the great satan who is out to destroy Islam. ⁃ TN Editor

A climate change meeting in Atlanta on Thursday had all the ingredients of a political spectacle.

With Donald Trump, a noted skeptic of climate change science winning the the White House, a nervous federal agency scrapped plans to host the event. Enter, Al Gore. The former Democratic presidential candidate helped revive the conference and took to the podium Thursday to talk about his signature issue.

But it was science – not politics – that carried the day.

In the climate and health meeting held at The Carter Center, Gore steered clear of mentioning Trump. Instead, he stressed that climate changes could render parts of the Middle East – including some of the holiest cities on the planet – uninhabitable. It could also cause deadly health problems and reduce life expectancy. Those in poverty will be hardest hit, he said.

The event was supposed to be a three-day conference held at the Centers for Disease Control. But when that event was cancelled following the presidential election, Gore helped organize a condensed, one-day meeting instead.

The former vice president urged scientists and health care providers to unite in efforts to combat the effects of climate change.

Among the most serious problems presented to conference attendees was the belief that the rising heat index could make parts of the world uninhabitable, Gore said.

“This is a relatively new finding, that in some areas of the Middle East and north Africa, there will be, according to the scientific predictions, areas that will no longer be fit for human habitation – beyond the limits for human survival,” Gore said. “The holy cities of Mecca and Medina are in this zone. Two years in Iran, the heat index – the combination of temperature and humidity – reached 165 degrees Fahrenheit.

“No human being can live for more than a few hours outdoors in those conditions,” Gore said.

If Obama could not start a war with all islam,send in the clown. Gore’s humiliation of being caught creating the biggest hoax in history has not stopped him from making money from it. At least he is scaring the hell out of the uneducated. Thanks to President Trump and a wide majority of the entire world all will become a historical note of the greatest crimes committed against humanity.