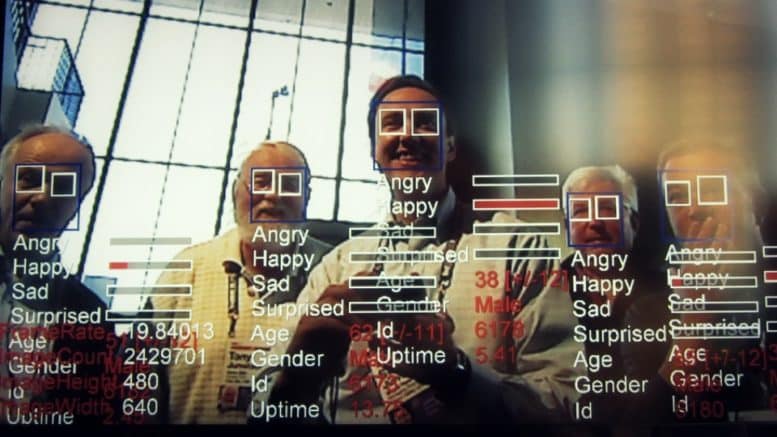 The latest software land rush goes beyond simple face recognition to reading your emotions. This will have thousands of ready applications such as pre-crime analysis and reporting. Of course, just as people misread emotions on a regular basis, so will the algorithm. ⁃ TN Editor

Facebook and Amazon’s insanity only seems to continue with no sign of slowing down anytime soon. Now, the two big conglomerate giants want to move into the uncharted territory of reading human emotions, both in their own ways.

Facebook wants a robot that has five senses which can read human emotions. Facebook wants “emotionally sensitive” robots that can explore the world, identify objects and people and enable its users to make more friends, Dailymail reported.

The robots would be fitted with wheels or tank-like caterpillar treads that would allow them to trundle about their environment.

Alternatively, such robots could be fitted out with drive systems that would allow them to move around underwater, fly through the air or float in space, Facebook suggest in their patent.

I am not sure why anyone would trust Facebook with data ever again, let alone biometric data, after all the numerous scandals Activist Post has documented including data mining. But to each their own I guess.

Amazon is also looking into reading human emotions in a completely different way by utilizing a voice-activated wearable device, that will sense its wearer’s state of mind by the tone of voice, Bloomberg reported.

It’s worth noting that both companies have a smart home device, and after reading this you should fear what information is being gathered by the cameras and microphones attached to those electronics … besides the typically targeted advertising to turn consumers into the product.

On the Amazon front, it seems more than likely the company will want to use this technology in a variety of different digital gadgets, ranging from personal assistants such as Alexa to new technologies that the retail giant is currently developing. Amazon has announced it’s developing a personal assistance robot, so the new emotional technology could easily be integrated into this at-home robot as a means to “serve the consumer better.” A horrifically terrifying thought indeed.

Amazon and Facebook aren’t the only companies looking into utilizing human emotions. Previously, Activist Post reported that Walmart was also looking into to monitoring your biometric data, pulse, and location from the sensors on a shopping cart handle.

This news comes as hundreds of retail stores — and soon thousands — are investigating using biometric facial recognition software FaceFirst to build a database of shoplifters to aid in the fight against theft, Activist Post reported.

FaceFirst is designed to scan faces as far as 50 to 100 feet away. As customers walk through a store entrance, the video camera captures repetitious images of each shopper and chooses the clearest one to store. The software then analyzes that image and compares it to a database of “bad customers” that the retailer has compiled; if there is a match, the software sends an alert to store employees that a “high risk” customer has entered the door.

The future of shopping seems to allude to having biometric scanners written all over it, a worrying prospect for privacy enthusiasts.

Several privacy advocate groups, attorneys, and even recently Microsoft, which also markets its own facial recognition system, have all raised concerns over the technology, pointing to issues of consent, racial profiling, and the potential to use images gathered through facial recognition cameras as evidence of criminal guilt by law enforcement.

Another reason NOT to enter Walmart.