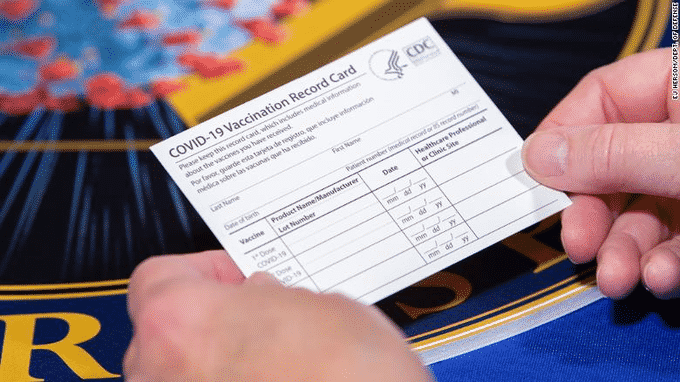 Please Share This Story!
PDF 📄
Ubiquitous and total surveillance is the holy grail of Technocracy which must collect all data in order to catalyze social engineering programs to change society. This is headed straight into a Scientific Dictatorship that will crush freedom and liberty. ⁃ TN Editor

On Wednesday the Department of Defense released the first images of a COVID-19 vaccination record card as well as vaccination kits, according to CNN.

“Everyone will be issued a written card that they can put in their wallet that will tell them what they had and when their next dose is due,” says Dr. Kelly Moore, associate director of the Immunization Action Coalition. “Let’s do the simple, easy thing first. Everyone’s going to get that.”

What’s more, vaccination clinics will also report to their state immunization registries which vaccine was given so that third parties can verify one’s vaccination status regardless of what their card says (or if they’ve lost it).

Moore said many places are planning to ask patients to voluntarily provide a cell phone number, so they can get a text message telling them when and where their next dose is scheduled to be administered.

Every dose administered will be reported to the US Centers for Disease Control and Prevention, said Claire Hannan, executive director of the Association of Immunization Managers. –CNN

The DoD also released information on vaccine kits, which include a card, needle, syringe, alcohol wipes and a mask. There are approximately 100 million such kits ready to go as soon as ‘the’ vaccine(s) is(are) chosen, according to Operation Warp Speed CEO, Gen. Gustave Perna.

The announcement comes less than two weeks after the UK government proposed “freedom passes” in order to reboot their economy – which would seemingly allow those willing to vaccinate a return to normal life. It also comes after signs of industries adapting to a future of immunity cards and vaccinations – with both announcing they will require proof of vaccination before people can attend concerts or fly.

Meanwhile, the vaccination roadshow has begun. On Wednesday, former presidents Obama, Clinton and Bush publicly announced that they would take the vaccine, on camera.

“I may end up taking it on TV or having it filmed, just so that people know that I trust this science,” Obama said in a Wednesday interview with Sirius XM radio – while Bush and Clinton made similar vows.

The next day, NIH Director Dr. Anthony Fauci ominously warned that it would create a “very serious situation” if people don’t take the vaccine.

LOL……Mmmmm…..Yeah; NOT going to happen!

On Wednesday, former presidents Obama, Clinton and Bush publicly announced that they would take the vaccine, on camera.“I may end up taking it on TV or having it filmed, just so that people know that I trust this science,” Obama said…. WHO’S THAT KNOCKING AT THE DOOR? IT’S THE GOVERNMENT (OR OFFICIAL) SAYING: WE ARE FROM THE GOVERNMENT AND WE ARE HERE TO HELP YOU! Given what is happening to our nation and people do you believe anything government say? What the educational system says? What false health official say? etc. If you do….Sad to say you are on our way…and wont be back… Read more »

Barry didn’t even drink the water in Flint. What a fraud and liar- like the rest of the above mentioned US Idiot presidents.

All of this for a 99.8% Recovery rate? What could possibly go wrong.

What an unbelievable BS! How want they check immunity of someone? With their fraudulent PCR test that finds DNA/RNA nobody knows where is it supposed to be from?

I don’t trust that they who say they’re getting the vaccine actually will. I’m thinking they will either knowingly or unknowingly be given something totally harmless to make sure there are no problems traceable to the vaccine. Someone else pointed out that it’s possible EVERYONE will get a harmless first dose so they’ll make sure to get their second dose, which will be the REAL vaccine and the attendant problems.

The Vaccine Bureaucracy Creep. A little bit at a time. “Everyone’s going to get that.” So arrogant in such a subtle way.

Former globalist presidents being vaccinated on TV…yeah right. Those lying bastards if anything will fake a saline shot.

Not going to take it. I donate mine to Clintonator Bushwacker, and Obamanation. I personally volunteer to inject each of the criminals.