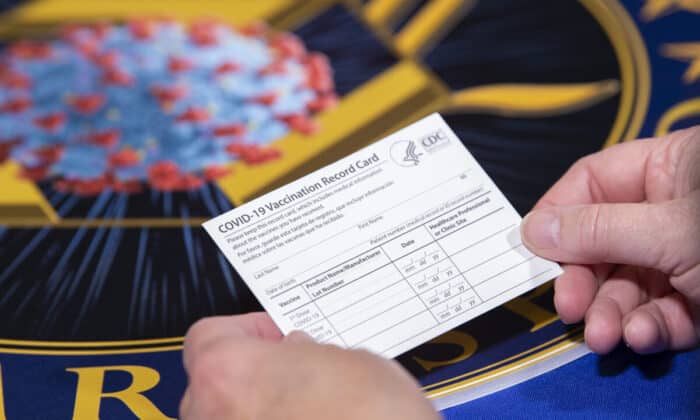 Posted By: Jack Phillips via The Epoch Times January 28, 2022

Please Share This Story!
PDF 📄
Legislators in South Carolina are commended in their application of legislation to stop the apartheid in their state. This proves that states have the power to override mandates and outside dictates from the federal government as well as industry. Medical Technocrats will be grinding their teeth over this as it forces them to get back to legitimate health care. ⁃ TN Editor

A newly proposed South Carolina law would make it illegal for certain institutions to ask a person for their COVID-19 vaccination status.

“The government has no place in making you or telling you to take the vaccination or threatening your livelihood if you don’t,” said state Rep. William Chumley, a co-sponsor of the bill, known as H.4848.

A representative of a public, private, or nonprofit entity who asks about a person’s COVID-19 vaccination status should be fined more than $14,000 or imprisoned not more than one year, or both, according to the text of the bill.

“South Carolina didn’t want to get in this fight,” Chumley told local media outlets. “It was brought to us by the federal government.”

The bill is currently being discussed in a state House committee.

Lawmakers who sponsored the bill said they support the measure because it can serve as a bulwark against government coercion.

“It’s about protecting people from being forced or coerced into getting a vaccine for purposes of employment, admission to schools, or government services,” state Rep. Wayne Long, a Republican, told Channel 2 News.

“I get calls from people literally every week begging the legislature to take some kind of action to protect people’s rights, to protect their privacy, and to keep them from being forced or coerced into getting a vaccine that they frankly don’t want to get,” Long added. “And even for people who have gotten the vaccine, I’ve spoken with many of them, it’s really a privacy issue.”

“You put employers in an impossible position,” Summerlin remarked. “You’ve got a (proposed) state law now that says that if you ask about that, and try to comply with federal law, then you are going to jail,” he added.

“What if you ask your coworker about their vaccination status, and you are just having a conversation?” he said. “What if you are a nurse, and you ask a fellow nurse about it? Do you want the local law enforcement to go in and arrest them because of this law?”

I think this law would protect folks from being intimated from being denied access to venues and services based on an experimental injection that is neither safe nor effective. I do not see why anyone would view this law as a problem to enforce on institutions or businesses that are currently denigrating those who refuse to have their health compromised by the heavy hand of government at all levels.

I try not to fret too much over evildoers these days. It finally dawned on me these past two years that there will always be enemies and adversity to contend with. The best one can do is to trust and obey God and stand on His promises. I stand on Psalm 91 and every promise of temporal and eternal deliverance that God offers.

Isn’t the Health Insurance Portability and Accountability Act a federal protection of medical status that is supposed to be only between the patient and their doctor/medical professional?

“You put employers in an impossible position,” Summerlin remarked. “You’ve got a (proposed) state law now that says that if you ask about that, and try to comply with federal law, then you are going to jail,”  No one EVER asked about my medical records or my vaccination status BEFORE the Feds mandated their totalitarian covid cult. Why would they? There is no other reason now than the Feds require it. Exactly, who knows an employer is not asking? Is there paperwork to fill out? Is there a sign-in sheet at work? Is there a covid police force I’m unaware of… Read more »