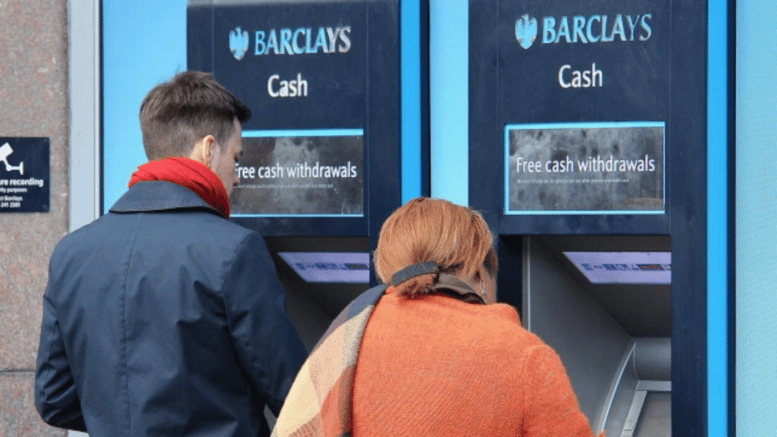 People use a cash machines outside a branch of Barclays bank in central London on the 50th birthday of the ATM (Picture: PA)

Please Share This Story!
PDF 📄
The more you resist plastic credit cards in favor of cash, you are contributing to the worldwide resistance against total bank control. While cash may be less convenient for some, it stymies global banks, central banks, the Bank for International Settlements and the World Economic Forum. Whenever you pay in cash, tell the receiver why you are doing so and encourage them to do the same. ⁃ TN Editor

The World Economic Forum (WEF) has been pushing hard for a ‘cashless society’ in a post-pandemic world, though physical money has made a comeback in at least one European country as consumers increasingly use notes and coins to help them balance household budgets amid an inflationary storm.

Britain’s Post Office released a report Monday that revealed even though the recent accelerated use of cards and digital payments on smartphones, demand for cash surged this summer, according to The Guardian. It said branches handled £801mln in personal cash withdrawals in July, an increase of 8% over June. The yearly change on last month’s figures was up 20% versus the July 2021 figure of £665mln.

Across the Post Office’s 11,500 branches, £3.31bln in cash was deposited and withdrawn in July — a record high for any month dating back over three centuries of operations.

The report pointed out that increasing physical cash demand was primarily due to more people managing their budgets via notes and coins on a “day-by-day basis.” It said some withdrawals were from vacationers needing cash for “staycations” in the UK. About 600,000 cash payouts totaling £90mln were from people who received power bill support from the government, the Post Office noted.

Britain is “anything but a cashless society,” according to the Post Office’s banking director Martin Kearsley.

“We’re seeing more and more people increasingly reliant on cash as the tried and tested way to manage a budget. Whether that’s for a staycation in the UK or if it’s to help prepare for financial pressures expected in the autumn, cash access in every community is critical,” Kearsley said.

We noted in February 2021, UK’s largest ATM network saw plummeting demand as consumers reduced cash usage. At the time, we asked this question: “How long will the desire for good old-fashioned bank notes last?

… and the answer is not long per the Post Office’s new report as The Guardian explains: “inflation going up and many bills expected to rise further – has led a growing numbers of people to turn once again to cash to help them plan their spending.”

So much for WEF, central banks, and major corporations pushing for cashless societies worldwide, more importantly, trying to usher in a hyper-centralized CBDC dystopia. With physical cash back in style in the UK, the move towards a cashless society could be a much more challenging task for elites than previously thought.

[…] ‘Anything But A Cashless Society’: UK Consumers Defy Banks’ War On Cash […]