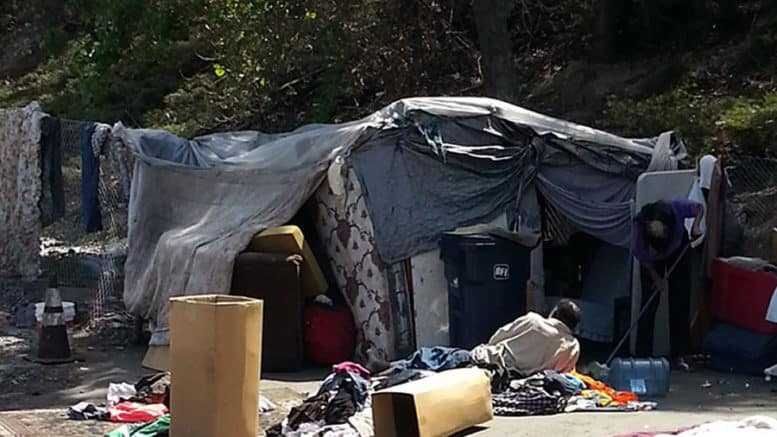 Please Share This Story!
PDF 📄
Smart City Technocrats don’t have problems that can’t be fixed by throwing more technology fixes at them. In this particular ludicrous extreme that seeks to fix broken lives, critics can only respond, “people are not potholes.’ ⁃ TN Editor

As income inequality widens and tech companies continue to stake their claim in West Coast cities, a growing number of people are left without affordable housing. As a result, there’s been a surge in homeless encampments or “tent cities” that are often reported by local residents via 311.

Individuals without housing in San Francisco surged 17% from 2017 to 2019. The Seattle Times reports that King County, WA, home of Seattle, saw an 8% decrease in the county’s homelessness in 2019, but that estimate is doubted by a city council member and service providers. And despite the reported decrease, there was a 309-person uptick of people living in tents or unsanctioned encampments.

The encampments have stirred a back-and-forth debate among business owners, residents and local politicians about how to “deal with” the homelessness problem. True to form, many cities have proposed tech-oriented solutions using apps to locate homeless people and get individuals off the street. But many questions remain about whether or not the apps are a “smart” solution to homelessness, or a waste of government money.

To app or not to app

Apps allow community members to report encampments quickly and remotely, providing the ability to send a report directly to the corresponding city department. If someone experiencing homelessness is loitering at a local business or if they appear to need medical attention, all it takes is a few clicks to make the city aware.

San Francisco has touted their technology as a “lifeline,” a smart solution to a widespread problem, and a way to get help quickly for people living on the streets. Others have called it a “snitch” app.

Seattle’s “Find It, Fix It” app is a mobile version of the city’s 311 number. Residents can alert the city to public problems with a message including a location and description. Users submit issues by category, such as illegal dumping, potholes, dead animals, and “other inquiries,” allowing residents to report encampments, city spokeswoman Cyndi Wilder told Smart Cities Dive in an email interview.

“With ‘Find It, Fix It,’ reporting an issue is as easy as snapping a photo with your smartphone,” according to the City of Seattle Website.

“Smart policy makers and elected officials should know better than to use technology for what might offer the illusion of a quick fix,” said Alison Eisinger, executive director of the Seattle/King County Coalition on Homelessness, in an email to Smart Cities Dive. The “Find It, Fix It” app has received similar public backlash as well as hundreds of false reports, which took city employees a full day to manually sort.

“Smart policy makers and elected officials should know better than to use technology for what might offer the illusion of a quick fix.”

There’s also not much evidence that the apps are successful beyond serving as a way to temporarily quell residents’ frustrations. And they aren’t always efficient for the city. It often takes the city weeks to respond to requests, according to a spokesperson for the city’s Homelessness Emergency Response team.

‘People are not potholes

Is there a way to create and roll out apps that help, not harm, people experiencing homelessness? Experts say it depends on the effectiveness of the homeless services system, city resources, the way the apps are explained to communities and the working relationship of various stakeholders.

Conflict between between the people experiencing homelessness, the homeless service providers and the city’s human services department is one reason why the app can’t work, according to Eisinger.

“Meaningful engagement takes time,” she said. “People are not potholes.”