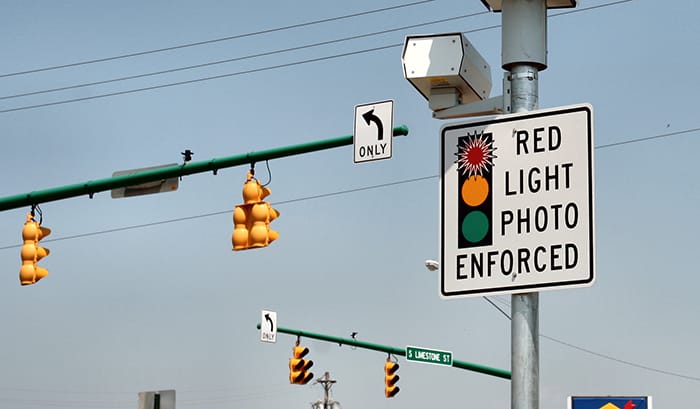 If the vast majority of drivers despise red-light cameras, then why do governments insist on forcing them upon us? This does little more than undermine the Rule of Law while fanning distrust and animosity. ⁃ TN Editor

Speed and red-light cameras are the bane of many motorists. A modern idea made possible by technology, they have been installed in at least 24 states. Although these cameras are a revenue boon for governments across the nation, their intrusion into daily life is disturbing, and their constitutionality is dubious.

Specifically, use of these cameras could violate the Sixth Amendment. The Confrontation Clause grants criminal defendants the right to be confronted with the witnesses against them. Since it is a camera and not a person that witnessed the offense, such violations generally cannot be considered a criminal offense. The ticket is issued to the owner of the vehicle, not to the person driving it, leaving a lack of certainty as to the identity of the offender.

Therefore, the “ticket” in most places is nothing more than a civil fine, making enforcement and collection difficult. To date, governments have avoided this problem by requiring payment of the fine before motorists can renew their driver’s license or auto registration. Although there generally are appeals procedures, they typically do not give drivers a day in court. In other words, what happened to being innocent until proven guilty?

There are several for-profit companies that install and operate the cameras, some of them foreign-owned. In a typical arrangement, a camera company will contract with a local government to pay the capital cost of installing the cameras in exchange for a share of the revenue generated via fines. In short, governments get a new revenue stream without any operating cost, and the camera companies make a tidy profit.

The companies and government officials argue that greater safety will result from fewer accidents and that the increased government revenue will benefit the local communities.

Studies to confirm those claims have yielded mixed results. Studies paid for by the camera companies or governments usually show fewer accidents. Independent studies and those financed by opponents usually show no gains and sometimes worse results.

Unsurprisingly, these cameras are deeply unpopular. Since 1991, there have been 42 elections on adopting or prohibiting either speed or red-light cameras or both. In all but two of these, voters have opposed the cameras by an average margin of 63 percent.

However, polling on the issue can show different results. A recent Public Opinion Strategies poll of 800 likely voters nationwide found 69 percent of respondents either strongly or somewhat support red-light cameras, while 29 percent somewhat or strongly oppose. Interestingly, 47 percent of those same respondents thought most of their neighbors opposed the cameras.

A possible explanation is that, as a national poll, most respondents do not live in a locality with red-light cameras since less than half the states allow them and not all jurisdictions in those states have them. Therefore, many have never experienced them. Familiarity breeds contempt.