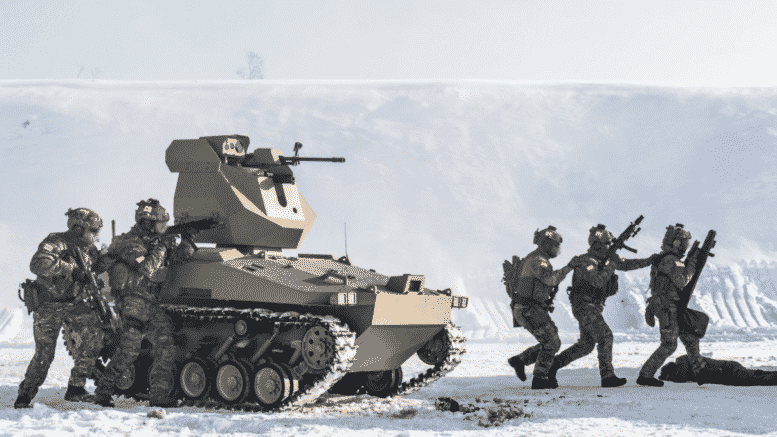 Please Share This Story!
PDF 📄
Three years ago, there were assurances that autonomous killer robots were not in our future, but Technocrat military engineers knew that was not the case. If WWIII comes to pass, it will be fought largely with autonomous robots armed with advanced weapons. ⁃ TN Editor

We’ve always questioned what wars in the future would be like. To answer that mystery is Yevgeny Kuznetsov, a member of the Presidium of the Council on Foreign Defense Policy, head of Singularity University in Moscow, who told Russian state-owned newspaper RIA Novosti that high-quality combat robotics will dominate the modern battlefield.

While the US, China, and Russia, along with other countries, race to modernize their forces with robotics, artificial intelligence, stealth fighters, new main battle tanks, upgraded infantry weapons, and, of course, how could we forget, hypersonic weapons, it appears the US is destined for war.

Kuznetsov, also a futurologist, explains while combat robots were only for wealthy countries, technological costs have dramatically dropped, allowing developed countries to obtain advanced weaponry. He said the side with the most advanced robots has a higher probability of winning future battles.

“Previously, robots in the army were the lot of wealthy countries such as the United States. Now Turkey and Israel have broken through the barrier and are making aircraft drones a mass product, which, as we have seen from the example of Azerbaijan, make a significant contribution to the outcome of hostilities. War is turning into a competition of economies: whoever has assembled more and better robots is more successful in solving problems on the battlefield, “Kuznetsov said.

He said the massive integration of unmanned aerial vehicles, sea and ground vehicles “will change the centuries-old perception of the state as a community of people, of which the more, the better since these are both working hands and potential soldiers. Robots break this scheme because they replace people in the workplace and in the army. The model of a state that is strong not by people, but by robots – we are simply not ready for that.”

“Future wars are not just going to be battles between robots, but contest between advanced economies capable of manufacturing such robotics in large numbers.”

From the cold war to the trade war to the tech war, the US, China, Russia, and many other countries, are increasing military budgets to procure enough combat robots that would hopefully increase their odds at winning future wars.

“Autonomous Combat Robots Are Seen As Future Of Modern Battlefield” and we are the enemy, make no mistake.

Until the robots are given AI and autonomous control.. then become self-aware and decide not to be our pawns in war anymore…