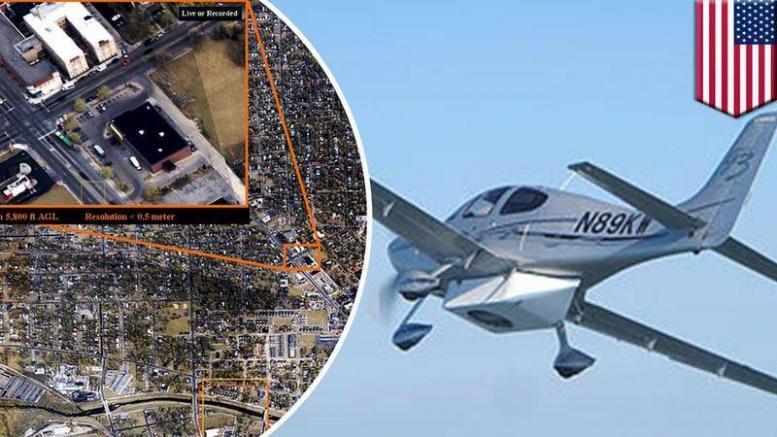 Please Share This Story!
PDF 📄
Using the most advanced photographic technology, comparable to military drones, Baltimore has re-implemented its private arial surveillance to ‘fight crime’. It slipped through under the cover of the COVID-19 pandemic.

In 2016, Baltimore implemented arial surveillance with the same company without public knowledge. The resulting public uproar scuttled the program, but it obviously did not deter city leaders. ⁃ TN Editor

For years, we’ve been documenting how spy planes have been flying over the Baltimore Metropolitan Area, transforming the region into a surveillance state.

To refresh your memory, the federal government used spy planes to monitor the 2015 riots in Baltimore City.

Even before the planes, the military was flying massive spy blimps over the region to “detect cruise missiles.”

What you’re beginning to understand is that Baltimore has been the testing ground over the last decade of how the surveillance state, now being ushered in by the COVID-19 outbreak, will be built across major metro areas.

Aaron Kesel of ActivistPost laid it out beautifully, “coronavirus outbreak is proving to be the Trojan horse that justifies increased digital surveillance.”

Baltimore is dealing with several public health crises at the moment, one is a murder epidemic, and the other is the COVID-19 outbreak. Blend it all together, and the city is on the verge of turmoil. Hence why the National Guard was called in several weeks ago, not just to assist local area hospitals dealing with an influx of virus cases and deaths, but also to maintain public order.

Like Rahm Emanuel has said, “never let a crisis go to waste.” And that is why the Baltimore City’s Board of Estimates approved the contract to resurrect the spy plane program this week, reported The Baltimore Sun.

Civil liberties advocates were quick to criticize the spy plane program, that would allow up to three planes circling Baltimore with large optical sensors, capturing images of 32 square miles, monitoring everyone and everything that moves in the city.

David Rocah, an attorney for the ACLU of Maryland, said it was “absurd” for Baltimore to approve the spy plane program, which includes “the most far-reaching surveillance technology in the country, during the viral outbreak.”

Rocah said each spy plane has military technology that was developed for Middle East wars that track objects, such as cars and people around the city. He said the sensors might not be able to identify a face but will be linked up with land-based CCTV networks on the ground that will turn Baltimore into a full-blown surveillance state.

Rocah said for Baltimore to approve the spy plane program during a virus crisis when the public wasn’t able to debate it because of social distancing rules is wrong.

Police Commissioner Michael Harrison has been pushing for the program, argues that it will deter crime in a city that is engulfed in a murder crisis.

We noted last week that Baltimore’s population crashed to a 100-year low in 2019, as residents have been desperately fleeing the region for the suburbs since the riots unfolded in 2015. At the end of December, Baltimore recorded the most homicides ever on record. On a per-capita basis, the area is one of the most dangerous places in the nation.

So it makes sense why Harrison wants three spy planes circling the skies – that is because the city has already imploded.

“I fully appreciate that the opponents of this program … have fundamental and philosophical beliefs against this kind of technology,” Harrison said. “These differing viewpoints are not solely isolated to this claim and extend to many other tools BPD uses every day.”

“I stand behind my commissioner.”

Rocah warned that spy planes and ground-based CCTV networks would allow the government to have even greater control of low-income “black and brown neighborhoods.”

And what is there to say that Baltimore officials won’t surveil the population during mass lockdowns. Or even could potentially track coronavirus patients.

With spy planes circling above and an extensive CCTV network on the ground, it’s only a matter of time before “pandemic drones” start buzzing overhead, detecting if residents are coughing and sneezing.

A full-blown surveillance state, on par to China, is being erected in Baltimore.

Drones can be cloaked visually day and night. E3dwk