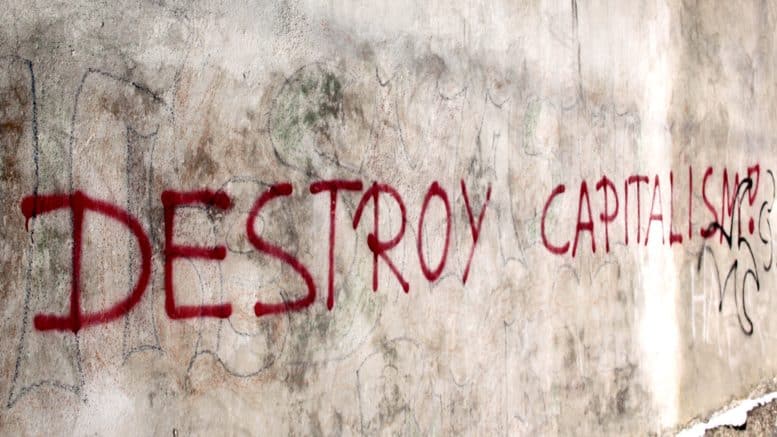 Please Share This Story!
PDF 📄
The politically green left of the political left is predictably blaming Capitalism and Free Enterprise for COVID-19 and wishing them both good riddance. The only alternative offered is Sustainable Development, aka Technocracy. ⁃ TN Editor

Not hesitating to exploit a health pandemic to advance their ideological agenda, Jacobin magazine on March 26 published an article attempting to proactively blame “millions” of coronavirus deaths on “capitalism.”

Titled “How Capitalism Kills during a Pandemic,” the article advances tired slogans about free markets placing “profits above people,” buttressed by faulty and at times self-contradictory arguments that prove unpersuasive.

To set the most alarmist tone possible, author Nick French begins by warning the reader that the coronavirus “will likely kill millions of people in the United States alone.”

This prediction cherry-picks the most ominous of such projections, irresponsibly relying on the report from London’s Imperial College COVID-19 Response Team, who own authors admitted includes projections that are “worst-case,” combined with the incredibly unrealistic caveat that “there are no interventions or changes in people’s behavior.” The report further admitted that “Epidemic timings are approximate given the limitations of surveillance data in both countries,” in essence cautioning that such predictions will be moot once more sufficient data becomes available. (The Jacobin article was published before a leading author of the report altered his predictions based upon the dramatic responses imposed in countries around the world.)

With the reader sufficiently shocked by the worst-case projection of victims based on partial data and unrealistic assumptions, French quickly assigns the villain: “Many of these fatalities could have been avoided if we had a social order that placed the needs of people over profit,” he declares.

Helping to shape the readers’ cartoonish image of evil capitalism, the article informs us: “capitalists prioritize profits over the welfare of their workers and of humanity as a whole,” and adds, “They will pollute the environment with deadly toxins and planet-destroying greenhouse gases before spending money on safe production processes.”

Mass death is but an unconsidered side effect in the heartless system of capitalism. Such is the framing that French establishes.

This leads into his specific critiques:

“First, pharmaceutical companies could have started to develop a vaccine for the virus years ago. The novel coronavirus that is now ravaging the world is actually one of a family of coronaviruses (including SARS and MERS) with which we have long been familiar,” French notes. “It would have been possible to begin research on vaccines and cures for coronaviruses in general, giving us a head start on treatments for the current outbreak. But pharmaceutical companies did not pursue this research, because the prospect of a cure was not sufficiently profitable.”

Two elephants in the room go unaddressed in this argument. First, if a vaccine for the virus would save millions of lives in the US alone, potentially tens of millions of lives worldwide, why would that product not be profitable? Does the author honestly think that a product that could literally save one’s life would not be in high demand?

Secondly, why does the blame for failing to develop a vaccine fall squarely on private pharmaceutical companies? What about all the other developed nations that have some form of single-payer or universal healthcare system that the Jacobin crowd thinks will save us all? Why didn’t any of them develop a vaccine?

Next, the article addresses concerns about the consequences of the economic shutdown being imposed on the American economy. “Losing a job could result in losing your health-care coverage or being unable to pay your student loans,” French writes. This concern is entirely justifiable.

French blames “capitalism” for putting individuals in precarious situations that are highly exacerbated by the pandemic crisis, but the roots are to be found in government intervention.

Next, he blames greedy capitalist owners for forcing workers to go to work and risk their health because doing otherwise would “hurt bosses’ bottom line.”

Weaponizing viruses along with DNA manipulation is probably the cause of covid19 along with many other viruses and diseases (bio warfare). People who have nothing to do with such depravity are always the ones on the losing end. Truly grateful to know who my real enemies are. There are many that I hope to never meet. Most of them are doing all of the damage they can from afar.