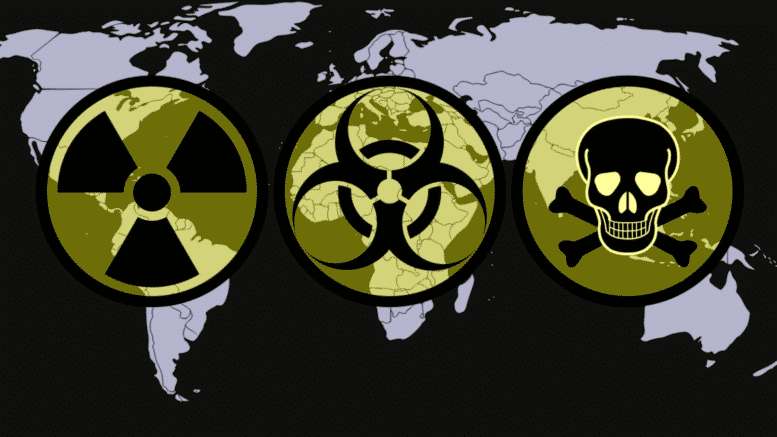 Please Share This Story!
PDF 📄
China is engaging in the most pervasive and dangerous form of eugenics ever seen in human history. By controlling specific DNA changes through engineered viruses, its biological warfare programs could intentionally wipe out hundreds of millions of humans. ⁃ TN Editor

Civilized nations are bound to obey the law of war embodied in the Geneva Conventions. The Conventions outlaw acts such as the intentional targeting of civilian populations and the creation and stockpiling of biological weapons. Despite those obligations, China is evidently eager to violate the Conventions because of opportunities presented by the advance of medical science.

At least since the 2002 publication of “Unrestricted Warfare,” a book by two People’s Liberation Army (PLA) colonels, Chinese military thinking has extended the concept of a battlefield to every aspect of military and civilian existence. The unlimited “battlefield” now means that China intends to include biological warfare among the most significant means of fighting a war.

From several news reports beginning in 2019 we know of a 2010 book called, “War for Biological Dominance,” by a professor at China’s Third Military Medical University, which emphasized the use of biological warfare. The theoretical basis continued in a 2015 essay by Gen. He Fuchu (then-president of China’s Academy of Military Medical Sciences) in which he argued that biotechnology will become the new “strategic commanding heights” of national defense, from biomaterials to “brain control” weapons.

Theory was made into doctrine in the 2017 edition of a PLA National Defense University textbook which debuted a section about biology as a domain of military struggle, mentioning the potential for new kinds of biological warfare to include “specific ethnic genetic attacks.”

China is evidently eager to violate its obligations under the Biological Weapons Convention, part of the Geneva Conventions, which prohibits the development and stockpiling of biological and toxin weapons.

China has reportedly begun using genomic science — the study of DNA “profiles” of individuals and ethnic groups — to identify its Uighur Muslim population, which is being severely oppressed. It has also created a national “gene bank,” intending to make it the world’s largest depository of genomic data.

CFIUS — the Committee on Foreign Investment in the U.S. — is an interagency group that has regulatory power over foreign purchases of U.S. companies and real estate. The State Department and the Department of Defense both play prominent roles in it. Under the Obama-Biden administration, CFIUS foolishly approved Beijing Genomics Incorporated’s (BGI’s) purchase of Complete Genomics Inc., (CGI) a U.S. company, in 2012.

By approving that purchase, CFIUS gave BGI access to CGI’s database of American DNA profiles and entry into the U.S. genomics market. It was akin to enabling the Chinese company Huawei to build a 5G network in the U.S., which President Trump stopped, because an Huawei-built 5G network would give China access to virtually all U.S. data.

BGI claims it is not owned by the Chinese government, but that claim is in doubt because of its several connections to the Beijing regime. BGI hosts government laboratories and several of its executives are former government officials.

In July, two subsidiaries of BGI — Xinjiang Silk Road BGI and Beijing Liuhe BGI — were blacklisted by the United States for their helping the Chinese identify and oppress the Uighurs. BGI itself apparently wasn’t blacklisted because it is heavily involved in genetic studies with companies in the U.S., meaning it has access to vastly more American DNA profiles than the acquisition of CGI gave it.

We have to take seriously China’s thinking about military applications of biological warfare, including specific “ethnic genetic attacks.” By broadening the concept of biowarfare — which it labels one of the principal domains of war — into fields such as genomics, the study of human DNA, China intends to create weapons based on genomic data. The concept is not fanciful.

DARPA has been active in Biological Warfare for decades. Mass secretive experiments upon US citizens has been going on in universities, hospitals, cities, etc. China is catching up.

It’s THEY against the rest of us all!

“I do not mince my words to say that a Holocaust is being prepared here in a whole new dimension. The world is currently being transformed into a global concentration camp.

This is world wide? Yes. Then so who is to stop them? First understand their language which is to take over the world and destroy those who resist TO BECOME ONE, or become a ‘Christ’ or a god. The Global Reset. The New Agers also want this, so do Muslims because the world leaders and religion (of the New Age type who have infiltrated churches-including The Roman Church) are doing the same exact thing. Talking to ‘spirits’ the Bible calls them devils. Hindu gods, dead relatives, etc. They all say there is coming a world leader who is ‘The Christ’,… Read more »

“Kamala Harris is named after a Hindu goddess.” Where can I read more about this? How do you figure that?

It’s THEY against the rest of us:

“I do not mince my words to say that a Holocaust is being prepared here in a whole new dimension. The world is currently being transformed into a global concentration camp.

The reason why China is gathering genomic data of Americans is clear – when you are working on developing, then testing any genomic bio-weapons, you’d never want to test it on your own race’s genom, right? Because sh!t happens, and you may accidentally wipe your own race out. What is a usurper to world dominance to do? Why, obviously get cracking with this weapon using any non-Chinese genom. Who cares if you erase an entire race of people in one fell swoop? Greta Thunberg and the UN may even thank you for ‘saving the planet from the human pestilence’.

What verse(s) can we find that in the bible? I missed that information somewhere…

Virus deployment commandant, General He Fuchu.
You have to be kidding.