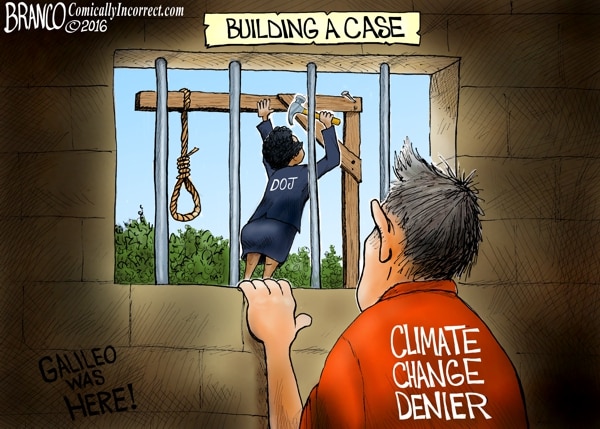 Technocrats get very edgy when their pseudo-science is exposed as faulty and corrupt, leading them to resort to Inquisition-style punishment at the hands of thought-police.  They have no defense, and they likely know it, but when climate change is turned into a religion (by Scientism), irrational beliefs need no empirical support. ⁃ TN Editor

Calls to punish global warming skepticism as a criminal offense have surged in the aftermath of Hurricanes Harvey and Irma, but it hasn’t discouraged climate scientists like Judith Curry.

A retired Georgia Tech professor, she argued on her Climate Etc. website that Irma, which hit Florida as a Category 4 hurricane on Saturday, was fueled in large part by “very weak” wind shear and that the hurricane intensified despite Atlantic Ocean temperatures that weren’t unusually warm.

That is the kind of talk that could get policymakers who heed her research hauled before the justice system, if some of those in the climate change movement have their way.

“Climate change denial should be a crime,” declared the Sept. 1 headline in the Outline. Mark Hertsgaard argued in a Sept. 7 article in the Nation, titled “Climate Denialism Is Literally Killing Us,” that “murder is murder” and “we should punish it as such.”

The suggestion that those who run afoul of the climate change consensus, in particular government officials, should face charges comes with temperatures flaring over the link between hurricanes and greenhouse gas emissions.

“In the wake of Harvey, it’s time to treat science denial as gross negligence — and hold those who do the denying accountable,” said the subhead in the Outline article, written by Brian Merchant.

Brad Johnson, executive director of Climate Hawks Vote, posted last week on Twitter a set of “climate disaster response rules,” the third of which was to “put officials who reject science in jail.”

Climate skeptics have taken note of the alarming trend. “Ever since Hurricane Harvey, the global warming-hurricane hysteria has ratcheted up to levels I haven’t seen since 2006,” said Ms. Curry.

Anthony Watts, who runs the Watts Up With That blog, listed some of the threats to criminalize skeptics under the headline, “Hate on Display — climate activists go bonkers over #Irma and nonexistent climate connection.”

Climate Depot’s Marc Morano said the heightened vitriol aimed at those who dispute the link between climate change and extreme weather events is a sign that the global warming narrative is losing steam with the public and policymakers.

“Activists have been frustrated with record number of polar bears, no acceleration of sea level, the Pause, no trends or declining trends in extreme weather and the public’s apathy,” said Mr. Morano, whose book “The Politically Incorrect Guide to Climate Change” is slated to be released in February.

“Trump has added to all of that, and we are now seeing them blow their gaskets in frustration,” he said.