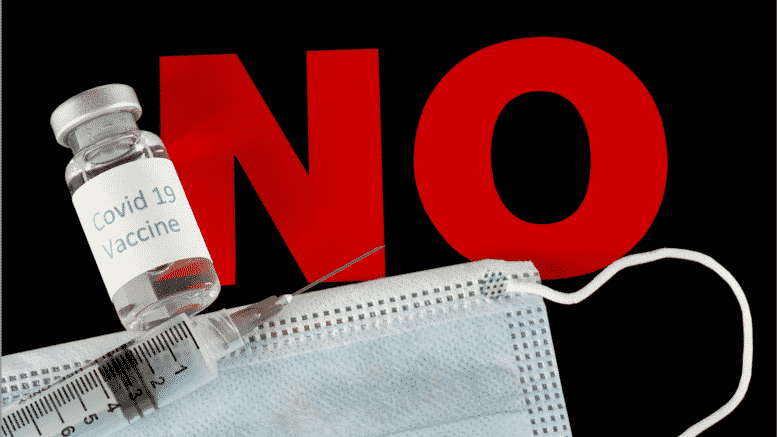 Please Share This Story!
PDF 📄
The Technocrat narrative says that being vaccine hesitant means you are an ignorant, psychopathic and stupid knuckle-dragging hillbilly Neanderthal, but a new study proves just the opposite: the more highly educated are the ones most likely to refuse the shot. ⁃ TN Editor

A new report by researchers at Carnegie Mellon University and the University of Pittsburgh has found that the most highly educated Americans are also the most vaccine hesitant.

The researchers canvassed no fewer than 5 million Americans who responded to surveys on whether they were “probably” or “definitely not planning on getting a COVID vaccine.

The results will shock many.

In addition, while the lowest educated saw the largest drop in vaccine hesitancy for the first five months of 2021, those with PhD’s were the most likely to not change their minds.

The study also reveals that the most common concern for those who are hesitant to take the vaccine is potential side-effects, with a lack of trust in government close behind in second.

The results of the investigation completely debunk the notion, amplified by media narratives, that only “dumb” people are vaccine hesitant.

How many of them haven’t taken the vaccine?

Meanwhile, the meme has been proven correct… 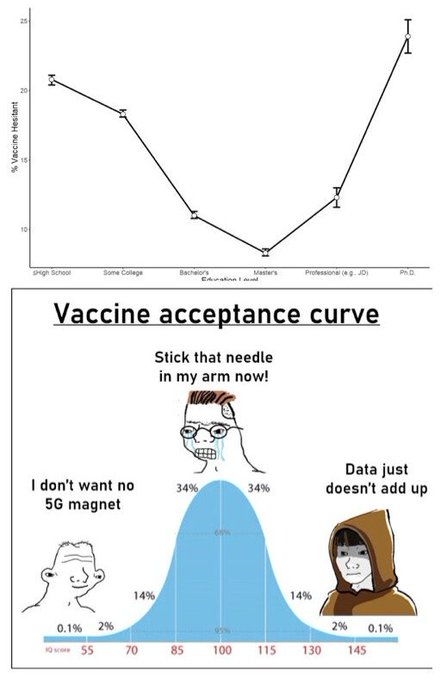 And maybe not even high school yet very much smarter than the middle American Fear Class.

This is not a revelation to the intelligent. Typical curve, I’d say. The least educated are running on intuition, which may not be book learning but it’s always smart to follow your gut when in doubt. The most educated have done their research. They can see the gene therapy shot masquerading as a vaccine being pushed onto the public by profit-centered corporations and collusive governments. They know the bottom line on that recognizable tryst from experience and study. The middle road public? They are always, always in support of the status quo and ready to follow orders without question–however they… Read more »

All central banks in Europe swear by Bloomberg finanical feeds, and bloomberg news, and bloomberg whatever else. They are sycophantic to the extreme. Look up “Mike Yeadon Bio” in a search engine. The first result I got was a Bloomberg result listing Yeadon’s years with Pfizer. How do you think the central banks responded to Yeadon’s statements regarding the futures of those who had taken the jabs, a few months back? I can tell you that they used it as a humoroous meme to get their morning chuckles. I now know of two people in one central bank who have… Read more »

Carnegie Mellon Study: Vaccine Hesitant Are Most Highly Educated – Life, Death and all between

No PhD here, but simple curiosity that lead to investigation and all that’s required to become vaccine hesitant or even, in my case anti-vaccine in general – with a few exceptions. Not sure what to make of it. Maybe something to do with effectiveness of education as programming.

I find this a tad hard to fathom. I have a Master’s (’77) and I’ve been anti since the 1980s when I started researching all of this. Personally, have had only 2 inoculations my entire life…smallpox and a polio sugar cube (hence, breast cancer 24 yrs ago). Nothing since then and I rarely ever become ill. I’ve been researching about “vaccines” for 25 or so years and cannot understand why so many people buy the indoctrination and trust the gov’t who is primarily funded by pharma. On the other hand, my spouse has a Phd in experimental psych and he’s… Read more »

Thanks Patrick, it’s all one big scam mate you are doing an excellent job, keep up the great work!

Here’s an interesting experiment. Go to a food store, and pick up some “food” packages, read the ingredients. How many ingredients does ti take to make bread? That’s right, the answer is 50+. How many for cookies? Again, GOOD…more than 50. Even if you don’t recognize many of the ingredients, don’t worry, put them into your mouth and let your body try to assimilate the “nutrients” from the treasure trove of chemicals you can get in a food store. Next try this one. Get on the “internet”, if you haven’t heard of it, its the thing that you’re looking at… Read more »