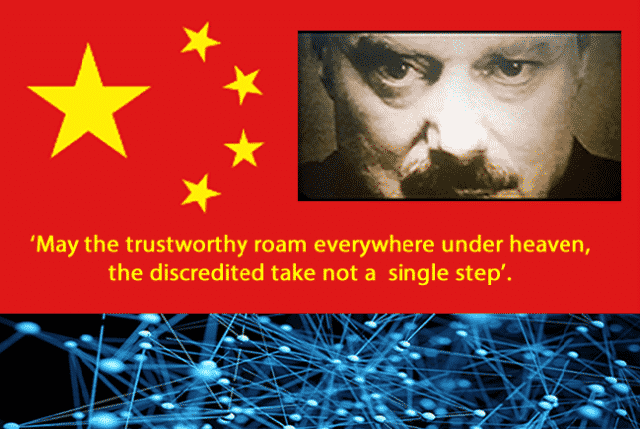 Please Share This Story!
PDF 📄
China’s clear intent is to build a police state with 100% total surveillance, where every citizen is tracked, monitored and analyzed around the clock. AI is applied to issue a ‘social score’ to everyone based on pliability and obedience. Their motto “keeping trust is glorious” is mirrored by the harsh effects of “breaking trust” and being isolated and restricted from normal societal necessities. In short, their Internet has become their gulag.  ⁃ TN Editor

For 40-year-old Mao Ya, the facial recognition camera that allows access to her apartment house is simply a useful convenience.

“If I am carrying shopping bags in both hands, I just have to look ahead and the door swings open,” she said. “And my 5-year-old daughter can just look up at the camera and get in. It’s good for kids because they often lose their keys.”

But for the police, the cameras that replaced the residents’ old entry cards serve quite a different purpose.

Now they can see who’s coming and going, and by combining artificial intelligence with a huge national bank of photos, the system in this pilot project should enable police to identify what one police report, shared with The Washington Post, called the “bad guys” who once might have slipped by.

Facial recognition is the new hot tech topic in China. Banks, airports, hotels and even public toilets are all trying to verify people’s identities by analyzing their faces. But the police and security state have been the most enthusiastic about embracing this new technology.

The pilot in Chongqing forms one tiny part of an ambitious plan, known as “Xue Liang,” which can be translated as “Sharp Eyes.” The intent is to connect the security cameras that already scan roads, shopping malls and transport hubs with private cameras on compounds and buildings, and integrate them into one nationwide surveillance and data-sharing platform.

It will use facial recognition and artificial intelligence to analyze and understand the mountain of incoming video evidence; to track suspects, spot suspicious behaviors and even predict crime; to coordinate the work of emergency services; and to monitor the comings and goings of the country’s 1.4 billion people, official documents and security industry reports show.

At the back end, these efforts merge with a vast database of information on every citizen, a “Police Cloud” that aims to scoop up such data as criminal and medical records, travel bookings, online purchase and even social media comments — and link it to everyone’s identity card and face.

A goal of all of these interlocking efforts: to track where people are, what they are up to, what they believe and who they associate with — and ultimately even to assign them a single “social credit” score based on whether the government and their fellow citizens consider them trustworthy.