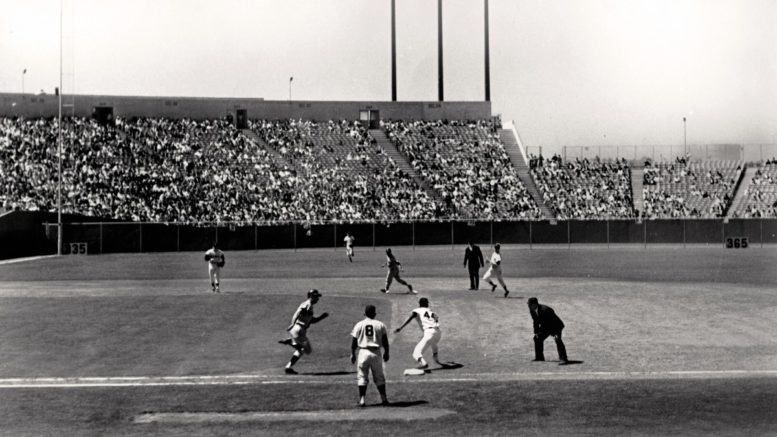 The problem is that sea levels are not rising and there is no evidence that they will start to rise in the future. The amount of water on planet earth has been static since creation, suffering only from minor redistribution due to  hydrological cycles.

Unfortunately, the blatant climate change propaganda in this article will be read and believed by thousands of people.  ⁃ TN Editor

Oakland Calif. — The infield is made of asphalt right now. So are the dugouts, the outfield and the stands. Someday this might be home to a baseball stadium, but today Howard Terminal is little more than a parking lot for 16-wheelers, populated by far more sea gulls than baseball fans.

Dave Kaval, the Oakland Athletics’ team president, walks from the gigantic cranes on the water’s edge to what soon might be the site of home plate. It smells like diesel fuel, not peanuts or Cracker Jacks. He no longer sees this 55-acre plot of land as a desolate storage space along the San Francisco Bay. He can’t afford to focus on what he sees here today or dwell on what the ballpark might look like when it opens its doors. He has to figure out how a stadium still might be serviceable decades down the road.

“We’re hopeful we’re going to build a ballpark that’s like a Fenway or Wrigley,” he said, “that will last 100 years.”

To do that, the A’s are having to confront a growing list of challenges, many that might not fully present themselves for years to come. The team is determined to build on the water, which on the surface might seem ill-advised. After all, the water surrounding the proposed construction site is expected to rise in the coming decades. That means Kaval faces a cascading series of problems that many teams and leagues operating in coastal cities are just starting to confront:

How do you maintain operations in areas vulnerable to climate change? How do you sustain facilities and retain fans? How do you make it all economically viable when threats such as sea level rise are inevitable?

Economists warn that climate change will have a major financial impact around the globe, and one working paper published last month stated that the United States could lose up to 10.5 percent of its gross domestic product by 2100 if emissions of greenhouse gases are not significantly cut. The economic impact similarly will be felt across the sports universe, one that could measure in the billions of dollars.

There has been no formal study done, but Allen Hershkowitz, an environment scientist who helped found Sport and Sustainability International, notes that teams and leagues will have to account for the physical impact on the venues but also losses from the disruption of business. Some locations will be prone to flooding, some to drought and still others to extreme heat, he says, and many will have to make serious adjustments in the years to come.

It’s a global issue, of course, and cities from Shanghai to Mumbai are bracing for rising sea levels. While the sports world might represent only a fraction of the industry and culture endangered by climate change, the games people love to play and watch are also among the most visible, not to mention vulnerable — touching cities and venues that have hosted some of the world’s biggest sporting events.

Many of this country’s favorite sports are contested near water. If sea levels someday were to rise five or six feet — regarded by many in the scientific community as an extreme projection that might be more likely next century — consider just some of the areas and sports facilities in the United States that probably would experience flooding: TD Garden in Boston, Citi Field in New York, MetLife Stadium in New Jersey, Petco Park in San Diego, Del Mar Racetrack in California, Oracle Park in San Francisco, plus numerous college facilities, high school fields and golf courses that dot the nation’s coastline — not to mention much of South Florida.

The Athletics’ ambitious stadium proposal highlights many of the problems posed by rising sea levels and some of the creative solutions teams and leagues might consider to address them. In targeting a site that the city of Oakland says sits six feet above sea level, Kaval said the team had no choice but to acknowledge the potential impacts of climate change.

What a fugacious and narrow focus these people present to the world.