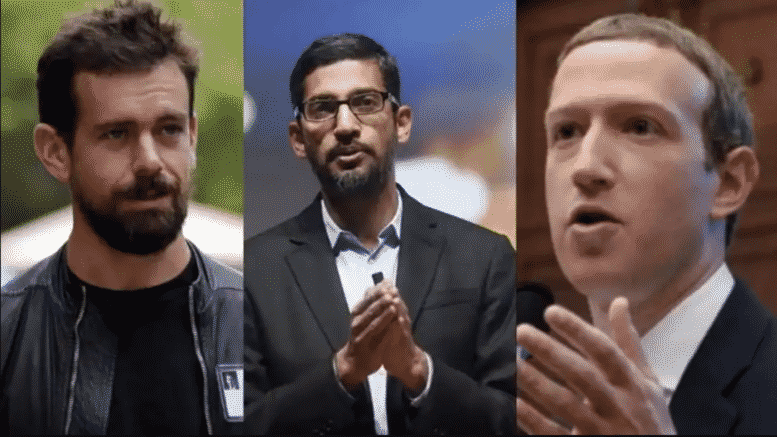 Please Share This Story!
PDF 📄
A Democrat-controlled Congress is anxious to grab censorship authority away from Big Tech platforms like Google, Twitter and Facebook. This is not an isolated incident, but is indicative of why the Biden Administration is reviving the battle for Net Neutrality, which I recently wrote about. ⁃ TN Editor

Over the course of five-plus hours on Thursday, a House Committee along with two subcommittees badgered three tech CEOs, repeatedly demanding that they censor more political content from their platforms and vowing legislative retaliation if they fail to comply. The hearing — convened by the House Energy and Commerce Committee’s Chair Rep. Frank Pallone, Jr. (D-NJ), and the two Chairs of its Subcommittees, Mike Doyle (D-PA) and Jan Schakowsky (D-IL) — was one of the most stunning displays of the growing authoritarian effort in Congress to commandeer the control which these companies wield over political discourse for their own political interests and purposes.

As I noted when I reported last month on the scheduling of this hearing, this was “the third time in less than five months that the U.S. Congress has summoned the CEOs of social media companies to appear before them with the explicit intent to pressure and coerce them to censor more content from their platforms.” The bulk of Thursday’s lengthy hearing consisted of one Democratic member after the next complaining that Facebook CEO Mark Zuckerberg, Google/Alphabet CEO Sundar Pichai and Twitter CEO Jack Dorsey have failed in their duties to censor political voices and ideological content that these elected officials regard as adversarial or harmful, accompanied by threats that legislative punishment (including possible revocation of Section 230 immunity) is imminent in order to force compliance (Section 230 is the provision of the 1996 Communications Decency Act that shields internet companies from liability for content posted by their users).

Republican members largely confined their grievances to the opposite concern: that these social media giants were excessively silencing conservative voices in order to promote a liberal political agenda (that complaint is only partially true: a good amount of online censorship, like growing law enforcement domestic monitoring generally, focuses on all anti-establishment ideologies, not just the right-wing variant). This editorial censoring, many Republicans insisted, rendered the tech companies’ Section 230 immunity obsolete, since they are now acting as publishers rather than mere neutral transmitters of information. Some Republicans did join with Democrats in demanding greater censorship, though typically in the name of protecting children from mental health disorders and predators rather than ideological conformity.

As they have done in prior hearings, both Zuckerberg and Pichai spoke like the super-scripted, programmed automatons that they are, eager to please their Congressional overseers (though they did periodically issue what should have been unnecessary warnings that excessive “content moderation” can cripple free political discourse). Dorsey, by contrast, seemed at the end of his line of patience and tolerance for vapid, moronic censorship demands, and — sitting in a kitchen in front of a pile of plates and glasses — he, refreshingly, barely bothered to hide that indifference. At one point, he flatly stated in response to demands that Twitter do more to remove “disinformation”: “I don’t think we should be the arbiters of truth and I don’t think the government should be either.”

Zuckerberg in particular has minimal capacity to communicate the way human beings naturally do. The Facebook CEO was obviously instructed by a team of public speaking consultants that it is customary to address members of the Committee as “Congressman” or “Congresswoman.” He thus began literally every answer he gave — even in rapid back and forth questions — with that word. He just refused to move his mouth without doing that — for five hours (though, in fairness, the questioning of Zuckerberg was often absurd and unreasonable). His brain permits no discretion to deviate from his script no matter how appropriate. For every question directed to him, he paused for several seconds, had his internal algorithms search for the relevant place in the metaphorical cassette inserted in a hidden box in his back, uttered the word “Congressman” or “Congresswoman,” stopped for several more seconds to search for the next applicable spot in the spine-cassette, and then proceeded unblinkingly to recite the words slowly transmitted into his neurons. One could practically see the gears in his head painfully churning as the cassette rewound or fast-forwarded. This tortuous ritual likely consumed roughly thirty percent of the hearing time. I’ve never seen members of Congress from across the ideological spectrum so united as they were by visceral contempt for Zuckerberg’s non-human comportment:

But it is vital not to lose sight of how truly despotic hearings like this are. It is easy to overlook because we have become so accustomed to political leaders successfully demanding that social media companies censor the internet in accordance with their whims. Recall that Parler, at the time it was the most-downloaded app in the country, was removed in January from the Apple and Google Play Stores and then denied internet service by Amazon, only after two very prominent Democratic House members publicly demanded this. At the last pro-censorship hearing convened by Congress, Sen. Ed Markey (D-MA) explicitly declared that the Democrats’ grievance is not that these companies are censoring too much but rather not enough. One Democrat after the next at Thursday’s hearing described all the content on the internet they want gone: or else. Many of them said this explicitly.

At one point toward the end of the hearing, Rep. Lizzie Fletcher (D-TX), in the context of the January 6 riot, actually suggested that the government should create a list of groups they unilaterally deem to be “domestic terror organizations” and then provide it to tech companies as guidance for what discussions they should “track and remove”: in other words, treat these groups the same was as ISIS and Al Qaeda.

Words cannot convey how chilling and authoritarian this all is: watching government officials, hour after hour, demand censorship of political speech and threaten punishment for failures to obey. As I detailed last month, the U.S. Supreme Court has repeatedly ruled that the state violates the First Amendment’s free speech guarantee when they coerce private actors to censor for them — exactly the tyrannical goal to which these hearings are singularly devoted.

WHY did you put up a photo of Psycho-Dorsey looking ‘almost human’?? Show a photo of what IT REALLY looks like (current)…….as a Doped-up, Junkie, PEDO PSYCHOPATH!!!!

He is not doped up junkie, he is possessed. He practices meditation, enlightenment etc. One thing all these elite people have in common as well as with the Beatles in their time is Buddhism/Hinduism and their spirit guides (demons). Yoga is big business and it is Buddhism and they are teaching to your kids!. Dorsey like the others are possessed. In the old days Timothy Leary taught the 60’s generation how to use psychedelic drugs (LSD) and later learned they don’t need them anymore to get the same place and to meet their spirit guides which was and is now… Read more »