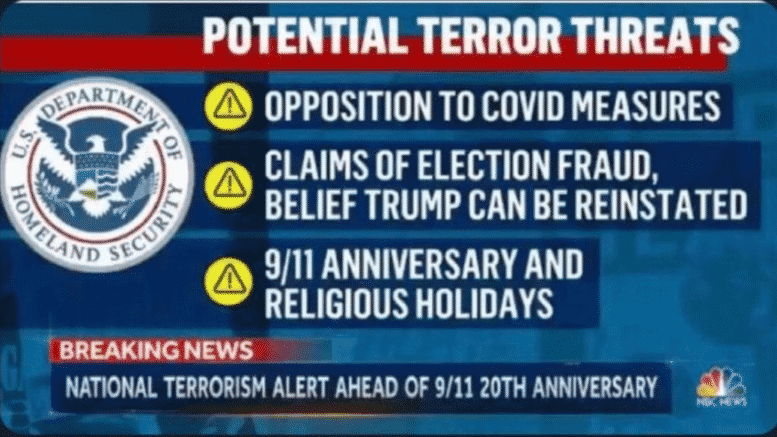 Please Share This Story!
PDF 📄
As more U.S agencies are weaponized against American citizens, those who oppose policies of mandated masks, social distancing and lockdown are increasingly categorized as “enemies of the state.” The Technocrats who orchestrate this want to silence all opposition. ⁃ TN Editor

In a help-wanted ad posted to the National Guard’s website it is looking for men and women between the ages of 17 and 35 and in good physical shape to serve in its military police units as internment and resettlement specialists.

The E31 classification jobs will work in “Search/Restraint.”

Under “Some of the Skills You’ll Learn,” the posting with a job location listed as Washington, D.C. gives the following information.

Internment/resettlement specialists are primarily responsible for day-to-day operations in a military confinement/correctional facility or detention/internment facility.

It should not be assumed these positions are for overseas detention facilities.

The U.S. Army published a 326-page training manual on February 12, 2010, on how to detain civilians, which included a clear description of detention camps that could be established here in the U.S. homeland.

The document, coded FM 3-39.40 and titled Internment and Resettlement Operations includes foreign and domestic detention of what it calls Civil Internees or CIs.

“Civil Support is the DOD [Department of Defense] support to U.S. civil authorities for domestic emergencies, and for designated law enforcement and other agencies. Civil support includes operations that address the consequences of natural or man-made disasters, accidents, terrorist attacks and incidents in the U.S. and its territories.”

In section 2-40, the document further defines the role of Internment and Resettlement operations, called I/R, as follows:

“The I/R tasks performed in support of civil support operations are similar to those during combat operations, but the techniques and procedures are modified based on the special OE associated with operating within U.S. territory and according to the categories of individuals [primarily DCs] to be housed in I/R facilities.”

The document describes the internment camps in great detail, including searches of detainees, how to silence them through the use of facemasks and stuffing muffling objects into their mouths, etc.

Following is a quote directly from the document, in Section 3-56, describing the duties of a “Psychological Operations Officer.”

Upon capture, the document says “soldiers process detainees using the ‘search, silence, segregate, speed, safeguard, and tag [5 Ss and a T]’ technique. This technique provides a structure to guide soldiers in conducting detainee operations until they transfer custody of detainees to another authority or location.

The first three “Ss” are described as follows:

Silence. Prevent detainees from communicating with one another or making audible clamor such as chanting, singing, or praying. Silence uncooperative detainees by muffling them with a soft, clean cloth tied around their mouths and fastened at the backs of their heads. Do not use duct tape or other adhesives, place a cloth or either objects inside the mouth, or apply physical force to silence detainees.

Segregate. Segregate detainees according to policy and SOPs [segregation requirements differ from operation to operation]

Sounds like every tyrannous government that ever lifted it’s stinking head out of the muck and stood on hind legs, most especially the German Nazis. Biden, the poser president, and his fascist rabble are working toward a totalitarian state in the USA for their UN/NWO masters. I can’t imagine the minds of individuals who would even consider such a job when it’s clear the search is on to build a force that will detain and silence free Americans, a People governed by the Bill of Rights and The Constitution. The individuals chosen for the job will be have to be… Read more »

Get with it! This is the second Bolshevik Revolution, not Nazi Germany.

Scroll down to the picture of transgender Rachel Levine. Read the list of names to the left. Get with it.

(was bumped out. sorry about the ad-on.) To add: Speaking out is not about violence, however. That is what they want to see. They want you and me to act out violently so they can respond and afterward use the FakeSM to whip the rest of the country into shape through fear. We have enough of a Fear Class. Let’s not increase their numbers with violent activity. So, SPEAK UP AND OUT LOUDLY! BUT, NO VIOLENCE. We’ll get to the end of this fascist horror before the agency builds a force to silence, detain and control us all. I’ve read… Read more »

Do you know how they are going to segue into this phase of the global genocide? Right now they are setting up the narrative that the delta variant is more harmful to children so in order to protect them, multiple means of gaining information about everyone around them will be obtained, leading to the removal of the children from their families or the removal of uncooperative adults from their midsts – those who won’t comply for any reason. They did a trial-run at the southern border with the internment camps and separating kids from their families. We need to CHALLENGE… Read more »

The help-wanted notice is from 2018 and…………its not all written they realize and succeed with.
Its important to know the idea was created and written by by some psycho, but there are thousands of other psycho projects to be aware of too.
Be prepared, take notice and be ready to act for your own defence.

The duration is Aug 13-Nov 11. Does this mean some kind of huge psyop will happen created by them? I wonder why Antifa did not qualify, and it does seems that they are doing this already to the aliens pouring over the border. The Sept 11th narrative everyone is throwing out it a big lie and has been since that day, and what is happening in Afghanistan began by the false narrative of Sept.11.Forgive me If I am confused but this looks really, really bad. On the other hand the my pillow guy maybe did prove his point, and something… Read more »

As our Editor in Chief here writes in his forward to this article, those seeking truth that ends in opposing the state sanctioned narrative are deemed ‘terrorists’ under a reign of terror by the state apparatus in service to an anti human anti Creator Pyramid Cap.

21,000+ Europeans killed by the “vaccines”; Australia’s truck drivers about to shut the country down; India’s Ivermectin blackout; and more (much more) from SAMIZDAT – NEWS FROM UNDERGROUND