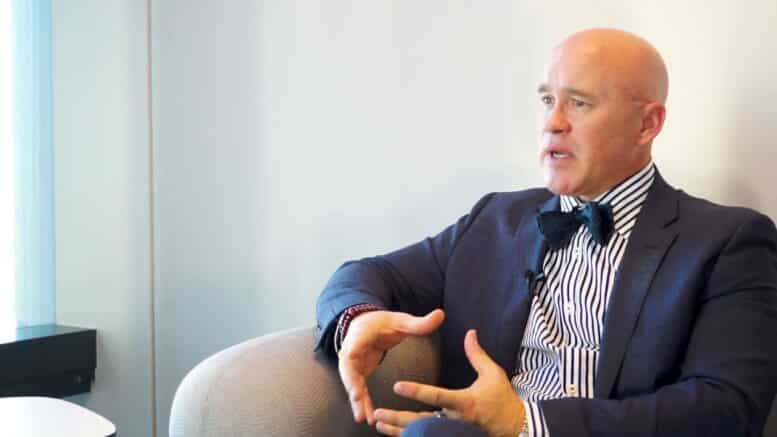 Please Share This Story!
PDF 📄
Dr. David Martin is an outspoken critic of medical tyranny and those who promote it. This interview exposes some of his thinking and plans to counter the prevailing false narratives. He is a medical doctor, formerly on faculty with the Univ. of Virginia Medical School. ⁃ TN Editor

Welcome to the show, David.

Thank you so much. It’s great to be here

You’re not a health guy, you’re a legal guy, right?

What’s your take on what’s happening with the virus right now?

Let’s start with I don’t think something’s happening with the virus right now. I think this is a very significant criminal operation, which is an act of terrorism. I think that’s what this is. The reason why I think that is because I’ve been monitoring since 1999. In 1999, we noticed that for the first time, the United States officially started funding work to what effectively was amplified biological toxins. They used the Coronavirus model as a way to do that. From 1999 to 2002, there was an explicit program to figure out how to get the coronavirus, which historically has been a nuisance to humans but not a big problem. It’s been a big problem to animals.

In fact, the fundamental research for a decade before the ‘90s was in cardiac myopathy in rabbits, not in people. The guy who was leading this program under the funding of NIAID with Anthony Fauci had gotten money to amplify the pathogenicity of a part of Coronavirus. He made it more toxic. Not surprisingly, the places where he was researching and the places where he was collaborating are where the Coronavirus outbreak allegedly started with the SARS outbreak in 2002 going into 2003. I have always said, I find it interesting that the official story we’re supposed to believe is that somehow or another, this mysteriously came out of the blue and it happened to come out of the blue where biological weapons labs were also happening.

It’s amazing how nature backed into the, “There’s a weapons lab. Why don’t we go ahead and have an outbreak there?” The fact of the matter is we, as humans, manipulated Coronavirus and then we had SARS. Here’s the funny thing. After 2003, the problem was Coronavirus resolved itself. It went through the population, had an effect and it resolved itself. Rather than celebrating, “We survived this thing,” some people got sick, some people died, that’s a tragedy but it was not the pandemic everybody thought it was going to be.

We survived it without a vaccine.

No vaccine, no intervention at all and they seriously publicly lamented the fact that it wasn’t virulent enough. Starting in 2005, there was an active program with the DARPA and with NIAID to begin work on figuring out ways to amplify the pathogenicity of this biological substance. They specifically focused on two pieces. One was the S1 spike protein and one was the ACE2 receptor. The ACE2 receptor is important because it’s the thing that makes lung tissue sensitive to this. That was the mysterious piece because it didn’t used to be a lung problem. It used to be a vascular problem but they amplified the ACE2 receptor component and they amplified the S1 spike protein, which is a very toxic component.

Those two amplifications started being amplified and funded through NIAID in 2005. In 2012 going into 2013, when we had the MERS outbreak in the Middle East, the National Science Foundation, National Academy of Science, NIAID and others started going, “Maybe we’re doing something we shouldn’t be doing.” There was a question of the ethics and the morals of doing this Gain-of-Function research leading to the 2013, 2014 decision to stop Gain-of-Function research is what the public was told. What the public wasn’t told was the people who were involved in the BSL-4 defense labs were allowed to keep amplifying this viral pathogen.

Let me interrupt you to ask a question. What was the justification they were giving for amplifying this virus?

The cover story is this. Biological weapons could be developed by some rogue nation or by some bad actors. If that happened, we should be prepared to develop vaccines. That’s what we were told. As early as March of 2005, I wrote in a public briefing to law enforcement intelligence agencies that this was not a just in case problem. It was, in fact, a program that included the dispersion of explosive biological material, such that you could put toxins into rocket-propelled grenades. I don’t know about you, but when I hear that, it doesn’t sound like a public health program to me. I published this book in March of 2005.

When people tell me, “It’s all in the interest of public health. It was all about making sure we were safe from potentially rogue actor states.” I’m sitting there going, “That smells like BS,” because it is. We have the evidence that in fact these programs were dual-use programs. These were programs that in fact did have a public health vaccine development treatment program. That’s true but they also had an offensive military application as well. We’re tracking all this stuff and we’ve been tracking it since 1999. Lo and behold, we started looking at the fact that coming into the spring of 2019.

This is nine months before they’re supposed to be a thing, we start seeing a lot of documents start showing up with the language about an accidental or intentional release of a respiratory pathogen. If that came out in one document and we go, “Somebody was concerned about that,” when it starts showing up in a bunch of documents, it shows up in March 2019, it shows up again in May 2019, it shows up again in September 2019 in the World Health Organization Global Preparedness Monitoring Board Program, you start going, “Hold on a minute, we’re being told something’s happening.”

Except they are not very much hinting. They are going, “You keep saying an accidental or intentional release of respiratory pathogen.” We were not surprised when we expected to see something happen in Wuhan or in Italy or in North Carolina or in any of the places where we know the BSL labs were manipulating the Coronavirus. For me, the whole idea that this was somehow an accidental thing fails on its face because you can’t get an accident with premeditated planning and then have nature come along and go, “By the way, humans are talking about doing something. Why don’t I fly a bat over a wet food market in Wuhan and somehow make this mysteriously happen?” The amount of improbabilities to land an accident of nature in a place where you also have a biological weapons lab is zero.

What are the implications of something being done deliberately?

Who is coming to war against us?

This is a massive transition between what used to be what I refer to as the Westphalian Nation-State Model, where it used to be you took the map and you drew lines on the map and you said, “That’s France. That’s Britain.” That era has come to an end quite a long time ago, probably around the time that Nixon took us off the gold standard. What’s happened is slowly corporations and corporate interests and financial interests have moved in as the thing that makes the difference. This is a war against the Westphalian Nation-State Model. It’s a coup of that model where corporations and financial interests have said, “We’re the ones that call the shots.”

Now we know that there are hosts of individuals who manipulate elections, who buy politicians and who buy everybody. We know that those organizations don’t officially have nation-states standing. When you know that a person like Bill Gates or Jeff Bezos or Anthony Fauci, never elected, never appointed, never anything that has a legal democratic process around it. When you have those people who show up on every head of state stage, whispering in the ear of every head of state and saying, “This is how you’re going to act,” that’s not they’re advising and giving their best input. They’re running the show.

What we’re experiencing right now is the most insidious form of what is effectively a civil war where the democratic nation-states are being erased by corporate interests and financial interests who have decided they are going to be taking the position that they’ve already paid for. They bought Congress and legislatures. They bought Governor’s offices all over the country. They’ve bought heads of state around the world and now they’re moving in and taking what they bought.

It’s not the sickness that’s the element of war as much as also the collapse of the economy and fear that is running rampant. I see these as tools as well.

This is more a financial crisis than a health crisis. Now we could both agree that our definition of health has been corrupted a long time ago. Health as a construct probably was hijacked somewhere around the 1770s when we started manipulating and this is Thomas Jefferson and others started manipulating pathogens to try to figure out how to control the epidemic-type and plague-type experiences. Whether it’s the poxes that came over from Europe, whether it’s the animal to human transfers that were a concern at the end of the 18th century, what happened was we decided that somehow or another chemistry was the basis of health. We stopped looking at the vitality like we’re standing out in the cold.

Our bodies have adapted for the cold. What has happened? Our blood supply is out of our faces. It’s going into our core because that’s how bodies were designed to deal with cold. That’s not a bad thing. That’s health. In fact, we would be unhealthy if that didn’t happen but that’s not a chemistry thing. That’s neurologic. That’s physiologic. That’s all kinds of systems engaged. The problem is you can’t meter those systems. You can’t dose those systems, which means you can’t monetize them. What happened was we started saying health was about things you could monetize because if I can dose you something, then I can charge you something. If your body is working, my body’s working, then nobody can make any money off it.

sounds like Pharisees*, a self-righteous clan of hypocrites is running the entire crime. They can’t be punished, they are the ‘chosen’ ones, the gentiles need to go, no white face any more…
* how far away are those from the Zionists?

Earth (Gaia) a living soul is transitioning to her higher dimensional self, We souls (the human race) are going with her to the higher levels of ENERGIES, higher levels of consciousness. We, mankind, have been for the last millennium creating this civilization in lower dense energies and that is where those in power have accumulated their vast wealth riches, and power over people, during those times in lower energies. The wars, conflicts economically etc., and inflicting people en mass by way of the diseases they create is how they retain these LOWER energies here on earth in order to thrive… Read more » 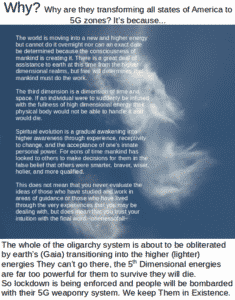 Consciousness is the substance of forms, and We are That. All you need to overcome all of these FEARS is know who you are…. 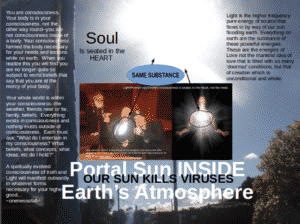 Stay in the physical mental state of mind forget about who are, and FEAR will always be with you! great choice! for yourself it’s where the unenlightened stay trapped in FEAR create all sorts of mental disabilities, limitations…the works!