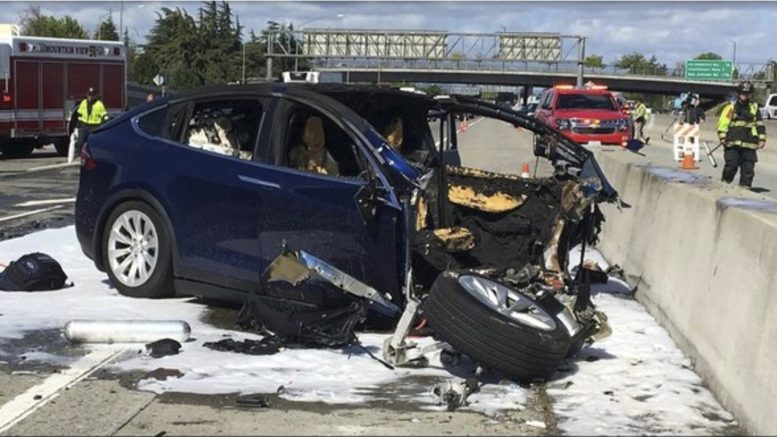 Please Share This Story!
PDF 📄
First responders are ringing their hands when EV battery packs ignite because burn very hot and very long, often restarting to burn after it is thought that they were extinguished. Plus, in crashes where internal cables are cut, severe shocks can literally electrocute a human. Are EVs really an advancement in cost-effective transportation?  ⁃ TN Editor

After an out-of-control Tesla Model S plowed into a stand of palm trees on a highway median outside Fort Lauderdale last month, police rushed to put out the ensuing blaze using a department-issued fire extinguisher. It was a wasted effort. The car kept on burning after the crash, which killed the driver.

The police may not have known lithium-ion batteries inside electric vehicles, once ignited, can’t be put out with chemicals from a conventional extinguisher. The battery fires are susceptible to a self-destructive chain reaction known as thermal runaway, causing a feedback loop of rising temperatures. The Tesla fire stumped a series of first responders in Florida. Firefighters eventually doused the flames with water, which seemed to work, but the wrecked car reignited twice more after being towed away. That prompted what a police report later termed “extraordinary measures,” including a call to Broward County’s hazmat unit for advice on stamping out the fire once and for all.

The accident illustrates the challenges faced by first responders unfamiliar with the special characteristics—and hazards—of electric vehicles’ powertrains. Safety experts say the only way to extinguish a lithium-ion battery inside a car is with thousands of gallons of water, much more than what it takes to stop a fire in a typical gasoline engine. The other option is to just let it burn itself out. “It’s such a difficult fire because it takes so much water to put out,” said Robert Taylor, fire marshal in Davie, Fla., where the crash occurred.

In addition to fires, emergency responders dealing with EVs face risks from high-voltage cables and silent-running motors. The experience taught Taylor’s team important lessons about dealing with electric vehicles. “For us,” he said, “it’ll be the awareness of auto-ignition of the battery and knowing how long the energy remains in them.”

In an emailed statement, Tesla Inc. called the accident tragic and said it had reached out to first responders to offer cooperation. The company also noted that vehicle fires aren’t unique to EVs. “We understand that speed is being investigated as a factor in this crash,” the company wrote, “and know that high speed collisions can result in a fire in any type of car, not just electric vehicles.”

While one witness said the car “flew” past him, police said it was traveling at the posted speed limit of 50 miles per hour.

With more than 760,000 electric and plug-in vehicles on the road in the U.S., according to the International Energy Agency, emergency responders with little past exposure to these cars are becoming more likely to encounter one at a crash scene. The U.S. National Transportation Safety Board is already investigating multiple incidents involving EV battery fires and problems encountered by emergency personnel. The agency plans to issue a set of recommendations based on four reference cases by late summer or early fall. “That will be the first major report addressing the issue,” said NTSB spokesman Chris O’Neil.

Electric vehicles are no more prone to accidents or fires than gasoline-powered cars—and might be less so, according to a 2017 report by the National Highway Traffic Safety Administration. That report also notes battery technology is still evolving, without any consensus on safe system design. Battery-powered cars remain a tiny minority in the U.S., with sales of EVs accounting for just 1.2 percent of total new vehicles delivered in the U.S. last year, according to data from Edmunds.