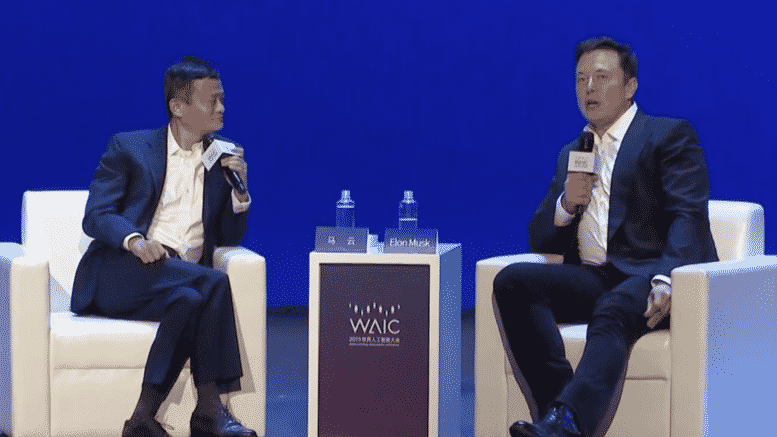 Please Share This Story!
PDF 📄
Two billionaire arch-Technocrats from vastly different cultures square off to debate the future of the world. Alibaba Chairman Jack Ma is clearly more in touch with the human condition than Elon Musk.

Tesla CEO Elon Musk on Wednesday said that computers are getting smarter than humans in more and more spheres and that the trend will continue.

“We will be far, far surpassed in every single way. I guarantee it,” Musk said to Jack Ma, chairman of Alibaba, at the World Artificial Intelligence Conference in Shanghai.

The comments highlight an evolving landscape in technology, including in artificial intelligence — an area technology companies are tapping to enhance their products and sell to businesses.

Musk pointed to advances in chess and the Chinese board game of Go as evidence of progress in AI.

He talked about how in the future technology from Neuralink, a start-up he co-founded, could give people a way to boost their skills in certain subjects. The company is seeking to draw on AI for augmenting people’s cognitive capabilities with brain-machine interfaces. The company is not there yet, though.

“The first thing we should assume is we are very dumb,” Musk said. “We can definitely make things smarter than ourselves.”

Ma had a different view, suggesting that a computer has never spawned a human being, or even a mosquito.

“I’ve never in my life, especially [in the] last two years, when people talk about AI, human beings will be controlled by machines,” he said. “I never think about that. It’s impossible.”

And Ma said that he does not want to play chess or Go against a machine. These games were designed for people to play against each other, he said.

“I’ll be happy to see two computers fight each other,” Ma added.

The Tesla chief has spoken previously about AI. In 2017 he suggested that competition among nations in AI could lead to World War III.

When creatures like Musk are viewed as philosophers, then it’s time to go home.

I can’t believe he gets the time of day. He is not normal. He’s either high (on drugs) all the time or he has a ‘spirit guide’ through his Yoga routines, or T.M. They lie! Spirit guides are not disembodied spirits they are demons/devils and they are using you Mr. Musk, and anyone dumb enough to listen to him. https://en.wikipedia.org/wiki/Spirit_guide “Thou believest that there is one God; thou doest well: the devils also believe, and tremble.” James 2:19

One is in Chinese prison, detention center, as he CCP view him as threat as he become loud and unhinged. Jack Ma is not seen publicly since 2019. This is system that Musk supports sadly and view it as “superior”. He does not realize he is lucky that he lives in US.