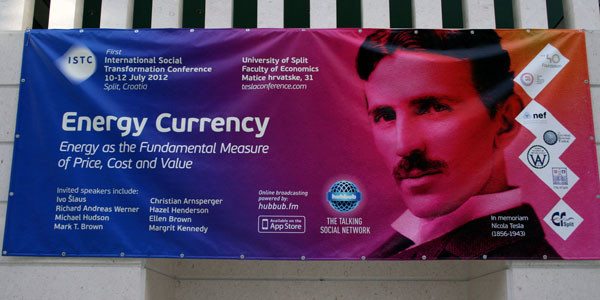 Please Share This Story!
PDF 📄
TN Note: Technocracy’s original specifications in 1933 called for a currency based on energy to regulate its resource-based economic system run by scientists and engineers. Today, this concept is being openly discussed in international circles and it is important to understand the mindset behind it. The text below appears on a website called “The Perfect Currency”.

Environmentalists measure in real physical units, not monetary units. Money was developed to facilitate the trade of disparate real goods across a broad range of distances where direct exchange of goods was impractical. But money has many shortcomings in representing the full real wealth creation process and assets especially over time. Environmentalists have waited patiently for the commercial economics side of the real wealth creation process to develop monetary measurements which will capture the stocks and flows of environmental processes and non-renewable resource assets.

Without such common measurements, no broad based and unified initiatives on our planets many environmental challenges can easily take place. There will continue to be strong resistance from the commercial economics sector to any environmental sector efforts to make radical policy changes based on factors which do not show up in their monetary based accounting system.

If we wait for commercial economists to develop a unit of measure which clearly represents all processes, we will wait in vain as it is not in the interests of the finance sector to change. It is up to the science community to provide a monetary basis which will adequately represent both human and natural processes.

Fortunately there is now an opportunity to combine the real wealth creation sectors demand for a representative currency with the need of the commercial economics sector to change the currency used as the basis for international trade.

As the international standard of commerce, the American dollar has had its day.

The proposal by Zhou Xiaochuan, governor of China’s central bank, in March 2009, to establish an international financial reserve currency based on a basket of national currencies is only the start of the process to replace the US dollar as the medium of trade and finance.

But a basket based currency, even if it is more stable, also adds more complexity. It is still based on printed money valuations and incorporates all of the other weaknesses inherent in currencies which are not hard asset based.

Even though the Chinese proposal was widely rejected, the need for a stable international trading currency is clear and is the subject of ongoing discussion. But why settle for another fabricated currency? The opportunity exists to advance to a real and stable standard.

Upon which bedrock can an upgraded currency be based to facilitate accurate valuations, stability, fluidity to represent any scale of asset or transaction and offer resistance to speculation? Gold is limited by scarcity and scalability. Although it can dampen the gyrations of national currencies, it doesn’t represent in and of itself, the real wealth creation process.

There is only one commodity which is universally produced and consumed with both the scale and resolution to represent the full scope of any human endeavour. We already measure it in tremendous detail and it is central to every economy and process.

Energy based currency would represent real wealth creation potential and would not be subject to the shifting valuation issues to which every national currency is prone. Energy represents the value of work already done as well as the potential of work which can be done.

Some 800 years ago, the Mongols avoided inflationary pressures on their currency by performing inventories of their assets and matching the money supply to it. The Mongol empire did not suffer from the boom and bust cycle generated by the currency inflation which has plagued other monetary economies. Energy based currency would eliminate this cycle by representing constant real product and illuminating actual input costs.

Energy underwrites all commercial and environmental activity. It is the most widely measured, consumed and produced commodity on the planet. In contrast to the gold producing club, every nation produces energy from a wide variety of sources.

Energy currency? Fine. But which units should be used? A barrel of oil in raw energy numbers, contains 5.9 million btus, 1729 kilowatt hours, 6.2 billion joules or 1.49 billion calories. Awkward, to say the least. Currently a US dollar (at $50/bbl of oil) translates to about 120,000 btus, 35kw hours, 120 million joules and 30 million calories. Kilowatt hours is the best known and the most widely used measurement.

The closest thing to being a round number while having roughly the same magnitude as the current US dollar would be 100,000 btus or 100 million joules. Will we settle on “beatees”, “julies” or “watties” as the base currency unit?

Scientists would help monetary experts decide. That would be a new partnership. The first of many paradigm shifts necessary in the integration of real world physical accounting and the representation of commercial economic activity.

A kilowatt hour (or BTU, joule, calorie) is the same in Canada as it is in Kazakstan. It represents the same potential now as it would have centuries ago or will centuries into the future. As a scientific unit of measure, there will be no speculation about what a kilowatt will be worth in 10 years.

“Speculating”, “hedging”, “converting”, “runs against” – these would be superfluous activities of the past. Energy currency is elemental, timeless and universal; three qualities which arbitrary currencies or other commodity based currencies do not possess.

If energy storage technology can be developed to the point at which several thousand kilowatt hours can (safely) be carried on something the size of a credit card, then we will have developed the perfect currency.

Commodities, services and goods will always fluctuate in relation to energy but those fluctuations would be no longer be speculatively driven on the monetary side – they would be real cost and real demand driven. And there would never be a stampede away from energy. To what? Time?

Our current national policy focus on monetary flows is one of the prime reasons for the disconnect between policy makers and environmentalists. The GDP/monetary metric simply does not represent the physical processes or the assets of the real world which environmentalists see as essential, uncounted and rapidly degrading.

Energy currency very readily yields energy accounting which can provide a more comprehensive description of real output and resource consumption. Compared to monetary analysis, it is a 3D catscan for programs associated with alternative energy and carbon emissions. These issues need energy accounting to avoid negative sum game red-herrings like corn ethanol at northern latitudes which can survive only in the fog of our current monetary system.

In contrast to adopting energy currency, the process of dumping the US dollar in favour of a spectrum of other national currencies is a political minefield loaded with huge implications for the many players.

No matter who champions it, no one nation will own energy based money. It will be the first truly international, non-political currency base. No nation will be able to manipulate it to avoid the consequences of its own economic mis-steps or to beggar its neighbours.

The recent Chinese efforts to promote the creation of a new standard for international financial reserves have not produced results although the reasons for the proposal remain obvious and valid. A move to energy based currency offers a graceful and non-political avenue of monetary reform as a logical step forward not an abandonment of a failure.

Despite the rejection of Mr. Zhou’s initiative, the ball is still in his court and will remain there until a successor to the US dollar is found.

In the face of rapidly deteriorating environmental conditions as well as the necessity of retooling international finance, change must come to our monetary system. Conversion to an energy standard will take full advantage of this opportunity.

Energy Currency has all of the positive attributes of arbitrary money without many of the large problems. It opens the possibility of addressing environmental problems in a comprehensive fashion – something that baseless currencies cannot do.