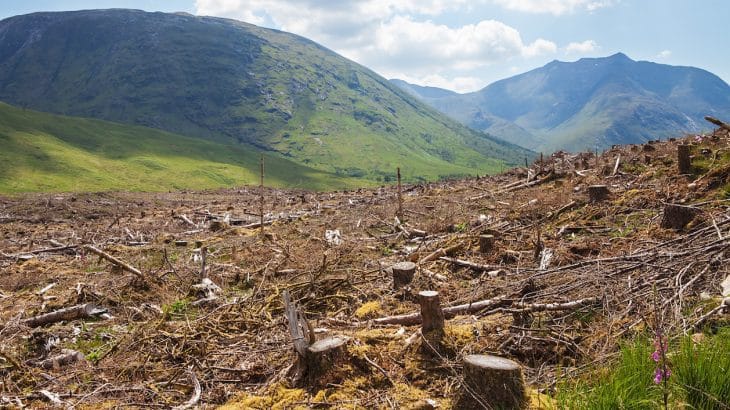 Please Share This Story!
PDF 📄
Under the guise of saving the environment by cutting CO2 emissions, environmentalists demanded wood pellets be used as a source of non-fossil fuel, “enviro-friendly’, heating. Deforestation is now up 49% as they cut down the trees to make pellets. Well, duh! ⁃ TN Editor

Swiss meteorologist Jörg Kachelmann calls it “the dumbest energy and environmental policy ever”. Now, finally, after years of being warned, Germany’s mainstream media are finally showing signs of waking up to it.

Germany’s flagship ARD public broadcasting recently presented a report earlier today about how “CO2 neutral” wood burning is leading to widespread deforestation across northern Europe – a rather embarrassing development for the Europeans, who recently expressed their condemnation over Brazilian forest policy.

The ARD’s “Das Erste” reports how satellite images show deforestation has risen 49% since 2016 in Sweden, Finland and the Baltic countries. The reason: “Because of the CO2 targets. That sounds totally crazy but precisely because of the trend to renewable energies is in part responsible for deforestation in Estonia,” says the Das Erste moderator.

Having spent some time working for the EU, Liiana Steinberg explains in the report how she recently returned to her native Estonia and was shocked to see how much deforestation had taken place over the recent years (2:25). “I discovered how the forests no longer exists here left and right.”

Where once massive hardwoods once stood now grows tiny fir trees. The harvested trees, the report says, were used for wood pellets – a form of renewable green energy. The trees, the pellet industry says, will grow back.

Not only are the forests taking a hit, but so is the wildlife that once inhabited in them. According to Ms. Steinberg, bird life has fallen some 25%. “It’s wasted. Now we have to start all over again.”

Climate activists, including the media like ARD, have long insisted that burning trees was good for the climate and environment because the emitted CO2 would simply be recycled back into nature – “follow the science” they insisted again and again. But they failed to understand that trees, depending on their age, acted as sinks and that some 100 years of stored carbon would be unloaded into the atmosphere in just a matter of hours if burned for heat.

It’s sad that they are just waking up to this (maybe).

I recommend watching the documentary ‘Planet of the Humans’ https://planetofthehumans.com/ which made it even clearer to me that ‘environmental’ groups (which also deny ongoing ‘climate engineering’ programs; e.g., https://www.Geoengineeringwatch.org) are not really interested in the environment. All the donations I could have given to other organizations… But better to realize reality late than never.

I appreciate this article since I was considering a pellet stove for my home. Scratch that idea!

Thanks for the heads up!

Environmentalists is nothing but disaster

The problem of deforestation is relevant not only to Europe. The situation is very similar in Asia, Africa, and South America. To solve this issue, we need to review the policies of the past years and change the approach to the formation of a new one. And it should include provisions for protecting forests from fires so that in the future there is no Forest fire HotSpots that have to be extinguished every year.