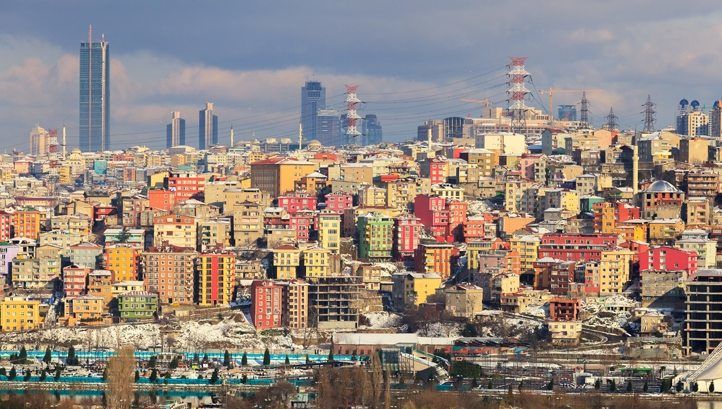 Please Share This Story!
PDF 📄
There is a development race on amongst global corporations to promote urbanization as a way to reap trillions for themselves. Understand that this is not really about ‘sustainability’ or the environment: It is about new forms of economic development that did not exist before, but are now possible. It is about tapping into the public purse directly and without limit. ⁃ TN Editor

Stepping back for a moment, the current model of urbanisation looks unsustainable if we are to accelerate the transition to a low-carbon, resource-efficient world. Already, the world’s urban areas account for the vast majority of resource consumption, accounting for some 70% of greenhouse gas emissions while 90% of urban areas are located in coastal areas vulnerable to extreme weather events and sea level rise. But urbanisation continues apace and cities must therefore lead solutions for a cleaner, resilient and more environmentally efficient future.

How this happens will be determined by the collective action by governments, citizens and businesses. For the latter, whilst the economic benefits of cities can be great, an ever-changing urban landscape poses significant environmental, social and economic challenges to delivering sustainable business growth.

The story of urbanisation so far has been a largely positive one, at least in economic terms. Where economies have grown, cities and megacities have developed through middle-income status – in 2015, 85% of global GDP was generated in cities. City development has also delivered positive social change. In China, for example, urbanisation has driven the country’s impressive growth and economic transformation. Hundreds of millions of Chinese inhabitants left farm work to seek better-paid jobs in cities, helping to lift 500 million people out of poverty. This story is much the same across the continent: as cities stimulate growth and foster industrialisation, people escape poverty and quality of life is improved.

It is perhaps no surprise, then that urbanisation has developed so rapidly to date – rising from 30% of the world living in urban areas in 1950 to 54% today. Spearheading this growth is North America (82% urbanised), Latin America and the Caribbean (80% urbanised), and Europe (73% urbanised). At the other end of the spectrum, Africa and Asia have remained predominantly rural regions, with just 40% and 48% of their respective populations urbanised.

But it is the next chapter in the urbanisation story that will prove pivotal. By 2050, there will be an additional 2.5 billion new people in the world – all of which will be living in urban areas. Driven by increasing economic globalisation, urbanisation levels are anticipated to reach 66%. Even more staggering is the fact that around 90% of this urban population growth will take place in Africa and Asia, with the two continents projected to become 56% and 64% urban respectively.

If managed correctly, this next phase of urbanisation could be even more positive than the last. Africa’s oldest independent country, Ethiopia, is a case in point. While 80% of the Ethiopian population is still rural, urbanisation is accelerating fast from the capital, Addis Ababa, right across the country, driven by the Ethiopian Government’s overarching aim for the nation to reach middle-income status within 10 years. PwC has supported the Government with its second Growth and Transformation Plan – a five-year strategy to reduce poverty and spur national development. The Plan now maps out more sustainable urbanisation pathways through to 2025 and 2050 by integrating economic, industrialisation, infrastructure and city planning. This accelerated and sustainable urbanisation model needs to be replicated across the continent – for example Kenya and Tanzania stand out as two other exciting and newly industrialising economies. With more than half of all Africans expected to live in cities by 2050, policymakers must ensure urbanisation is a catalyst for positive development and growth across the continent, and does not result in millions of people eking out precarious, unemployed and disadvantaged existences in slums.

Looking at this through the lens of corporate sustainability, some key questions will need to be answered. If Ethiopia and Bangladesh are manufacturing the next wave of products, are international supply chains ready to manage that transition? Will issues of human rights and modern slavery in these emerging markets present the same challenges that have been seen in manufacturing hubs across East Asia? When embracing these new markets, both for production and consumption purposes, companies must set clear and stringent sustainability and ethical benchmarks for these new supply chain participants, and in ways that learn from experiences in industrialised Asia. But in doing this, business needs to acknowledge and adapt to socioeconomic context, capacity and cultural circumstances and collaborate effectively to safeguard ethical and sustainable business practices.

From challenge to opportunity

For cities in all countries, the integrated and compact design of cities using public transport and mobility solutions is at the core of providing a foundation for a truly sustainable city. The electrification of vehicles in urban areas is one step to decarbonisation, but charging infrastructure remains relatively poor and is seemingly hindering market growth. The high infrastructure and R&D costs of adopting autonomous vehicles, meanwhile, is also proving a difficult hurdle to overcome in the short term. Cities should prioritise public transport as the first priority embracing low carbon, flexible transport networks that support appropriate density of urban form, improve air quality and equitable access.