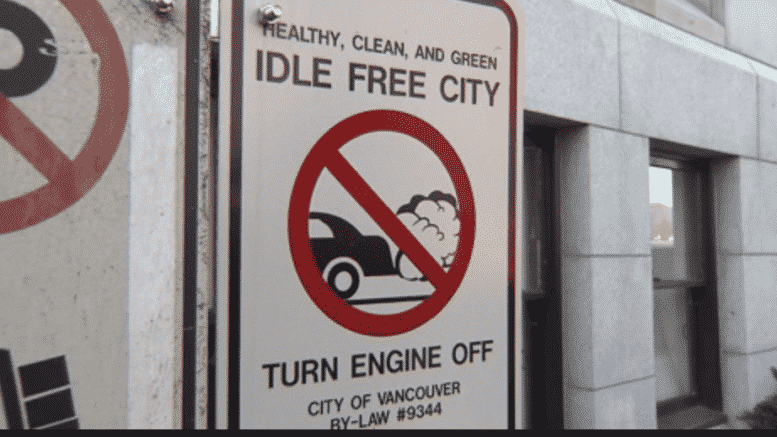 Canadian Technocrats and eco-fascists are taking over Canada with green madness. In Vancouver, it is now illegal to idle your car, even if it is to keep warm in frigid temperature or warm up your car before taking off.  ⁃ TN Editor

This past weekend I was in Vancouver, BC with my 17-year-old son. I agreed to pick him up in front of our hotel once we had lunch. After idling for several minutes in my Jeep SRT, the carbon-neutral cult descended on me like a swarm of mad locusts. I was vociferously anathematized as a polluting pariah as I was after-all, killing the ‘great goddess.’ Imagine the horror of a blonde Canadian idling her vehicle in cold weather, leaving a 5-minute-long cloud of exhaust in her wake. Oh, the atrocity!

After the incident and a few calls later, I came to find out that idling is ILLEGAL in Vancouver and comes with a hefty fine. But don’t worry – there’s a way to get cash for your climate woes.

If Agenda 21 and Agenda 30 weren’t bad enough, the new “Idle No More Movement” (not to be confused with the Aboriginals saving the planet movement of the same name) is in full effect.

Get Some $Green for Your Green

Want some cold hard cash for saving Gaia? Well, now the Canadian government will give you grants to start  ‘Idle Free’ in your community. The Canadian Natural Resources branch of the federal government has several new programs in effect where your future could be green. That’s right – they are dishing out dough to those who want a Green Future. Many companies are getting huge cash infusions for projects like a Quebec Pulp Mill that snagged a whopping $2 million for their Clean Energy Innovation Program. And many green jobs that go along with these projects.

Now one of the largest retail and wholesale marketing brands that took over Suncor Energy, Petro-Canada, has jumped on the save-the-planet band wagon with a site lecturing Canadians on reasons not to run your car – period. Their Pumptalk website encourages everyone’s favourite eco-buzz-word, ‘sustainability.’ It dissuades clueless Canucks from both warming up their cars in winter with idling, and cooling them down in summer with A/C. Al Gore would salivate.

Speaking of Gore, just when you thought you were rid of Al “hot air” Gore, the United Nations doubles down on a New DEAL by teaming up with the ‘pagan death-cult’ High Priest himself to promote a sweeping environmental agenda that seems all too familiar. It’s being dubbed as the “New Deal For Nature.” But is it really New?

The term Sustainable Development was first introduced to the world in a 1987 report (Our Common Future), produced by the United Nations World Commission on Environmental and Development, authored by Gro Harlem Brundtland, VP of the World Socialist Party.  The term was first offered as official UN policy in 1992, in a document called UN Sustainable Development Agenda 21, issued at the UN’s Earth Summit – today referred to simply as Agenda 21. Agenda 21 was the brainchild of Maurice Strong, a devotee of Karl Marx who strongly opined what Hitler echoed in Mein Kampf, ‘Christianity is a rebellion against natural law; a protest against nature.’

The so-called new deal eerily mirrors the 2009 Kyoto protocol which got axed after the leaked email debacle (dubbed Climate-Gate). It reemerged the next year as the ‘Green Climate Fund.’ The deal is a call back to warnings that underpinned “population bomb” fears that humanity was sucking up Earth’s natural resources faster than they could be replenished. Those warnings fell flat, but the UN thinks it’s high time to resuscitate the ruse to halt the coming catastrophe.

Speaking of schemes, the “Green New Deal” being pushed by New York Democratic Rep. Alexandria Ocasio-Cortez and US-based environmental activists joined with Voice for the Planet launched at this year’s WEF (World Economic Forum) to push the “New Deal For Nature,” which is a partnership of environmentalists including Gore’s Climate Reality Project.

Even far left Kamala Harris (D-Calif.) spoke at a townhall meeting endorsingthe “Green New Deal.” “I support a Green New Deal,” she said during a CNN town hall in Iowa. “Climate change is an existential threat to us, and we have got to deal with the reality of it,” she added.

The new green deal’s biodiversity plan got a boost at the World Economic Forum(WEF) in Davos, Switzerland at a dinner co-hosted with reigning champion for Gaia, the World Wildlife Fund (WWF), featuring an-end-is-night spiel by one, Albert Gore.

“I refuse to believe that we are the generation who willingly and passively allowed the destruction of the world on our watch! Who is with me?” Gore said at the dinner.

The truth is, this new deal is just the same OLD deal spun under new rhetoric of ‘saving the planet.’ The seemingly benevolent guise of this ‘Green Gospel‘ calls for the destruction of capitalist, free enterprise economies and elimination of privately owned land where people acquiesce to a Socialist Marxist regime of totalitarianism.

Since they only have 12 more years I wonder, are Ocasio-Cortez and ilk still taking their pensions? Any way you slice it, the future is looking a whole lot brighter…brighter green.