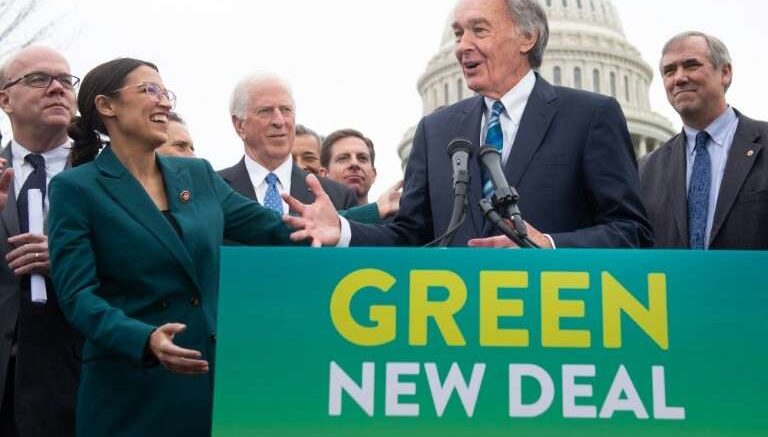 SANDALOW: Good morning, everyone. My name’s David Sandalow. I am the inaugural fellow at the Center on Global Energy Policy at Columbia University. And I am delighted to be here for an on-the-record session with Senator Ed Markey.

He—the senator needs very little introduction in this town. He has been a member of Congress for more than forty years. He was first elected to the House of Representatives in 1976 and elected to the U.S. Senate in 2013. Energy and environmental issues has been a priority of the senator’s for all of his career. To pick just a few examples, he’s the author of the Appliance Efficiency Act of 1987, principal House author of the 2007 fuel economy law, coauthor of the landmark 2009 Waxman-Markey bill. From 2007 to 2010, he chaired the select committee on energy independence and global warming. Today in the Senate, he’s a member of the Committee on Foreign Relations, Committee on Environment and Public Works, Committee on Commerce, Science, and Transportation.

And in February, he introduced Senate Resolution 59, which is titled The Resolution Recognizing the Duty of the Federal Government to Create a Green New Deal, which is what we’re here to discuss today. So, Senator, let me start with a basic question: What is the Green New Deal?

MARKEY: The Green New Deal is a massive mobilization to transform our climate, our economy, and our democracy. It is not prescriptive, but it is a set of principles that we lay out as a goal for the country. And it is as a result of a conclusion that has been reached, as a consensus, by the scientists of the United Nations and our own country. So we begin by just making it clear that the United Nations and all of their scientists concluded at the end of last year that climate is warming dangerously, that the goal should no longer be two degrees centigrade but one-point-five degrees. And that we have until 2030 before we start to see the real catastrophic consequences. And in the words of the United Nations scientists, that the threat is now existential to the planet.

Now, that’s combined with the conclusion of thirteen separate federal agencies at the end of 2018, which also issued a report. Because of a federal law passed in 1990, every four years they must do so on the subject of climate change. Their conclusion was that if we continue business as usual that the planet is going to warm by nine degrees Fahrenheit by the year 2100. Nine degrees Fahrenheit by the year 2100. And that it could lead to a rise in sea levels of—in worst case scenario—eleven feet. So the magnitude of the threat is huge. And it is a consensus amongst global scientists and domestic scientists. It’s no longer a debatable subject, regardless of how much money the Koch brothers throw at the phony science, no matter how much greenwashing the fossil fuel industry seeks to engage in. That debate is over.

However, we believe that we can create between three and five million jobs while we accomplish it. And what we want, and we state quite clearly in the Green New Deal resolution, is that we want for this program to be inclusive. Unlike the first New Deal, which actually excluded African Americans, the sharecroppers, from being able to participate in Social Security. We make it quite explicit that everyone should be included—marginalized communities, those where in many, many instances where the most polluting facilities were located and still are located today, should all be included in this transformation.

So that’s our goal. And it has in just ten weeks transformed the discussion around climate change. It’s triggered a national debate. Everyone has a view on it now. And it is now injected deeply into the—into the political debate in our country. And just for a frame of reference, in 2016—this is how sad it is—in 2016, neither Hillary Clinton nor Donald Trump were asked a single question about climate change, an existential threat to the planet. Not a single question asked by reporters. How sad is that? The Green New Deal has solved that problem for 2019, OK, and 2020. We don’t have to worry that people are going to not have this as a central question. They are going to have to be prepared to answer.

MARKEY: The ten-year mobilization is towards that goal. The analogy that I use is when President Kennedy felt that Soviet dominance in outer space was an existential threat to the United States in the ’60s—Sputnik, Yuri Gagarin—that we could not fall behind. Whoever controlled outer space would control the destiny of the planet, given the nuclear weapons proliferation that was taking place. And so what he called for was a ten-year mobilization for the United States to send a mission to the moon. Now, when he spoke at Rice University, he said: We will have to invent metals, alloys, propulsion systems that do not exist. That we will have to return that mission safely from the moon through heat half the intensity of the sun, and we would have to do its safely within that ten-year period. And we would do it, not because it was easy, but because it was hard. And we would be successful because we were bold.

Now, we actually finished it within that period of time. And I think the U.S. looks back quite proudly at what happened. If it took eleven years, I think we’d still be proud. Or twelve years. But the mobilization is what had to be unleashed.

SANDALOW: So your point is, we need to start started.

SANDALOW: So at the Conservative Political Action Conference, the president described the new deal as calling for, quote, “no planes.” And a former aide to the president said: The Green New Deal, quote, “wants to take away your hamburgers.” (Laughter.) Are those descriptions correct?

MARKEY: No. Surprisingly, something Donald Trump said is inaccurate. (Laughter.) So, no, it doesn’t ban planes, and it doesn’t ban hamburgers, and it doesn’t ban nuclear power, and it doesn’t ban carbon capture and sequestration. None of those words are actually in the Green New Deal. They’re not even in there. So our goal is to challenge, you know, the country. And in fact, AOC and I, we actually did a—we took a picture of us eating ice cream saying: Well, you know, we love ice cream. And as a result we love cows. So we don’t want to ban cows. OK, so we took a picture to that effect. So we have to deal with—you know, with Trump. And we know he has a historically high prevarication coefficient. (Laughter.) And we just have to deal with that as kind of his underlying personality trait.

MARKEY: Well, exactly. Exactly what we wanted. By, the way, David, thank you for all your great work on energy and throughout your entire career.

So what are we looking for? Well, about a hundred years ago the oil industry convinced our federal legislators—and, by the way, in many states—pretty much every state legislator—to begin giving tax breaks to oil companies, and gas companies, and coal companies, and nuclear companies. Tax breaks. Those tax breaks are still on the books for the oil companies a hundred years later. So I guess that’s a prefect public-private partnership, huh? And so what we’re looking for is the perfect public-private partnership for the competition—wind, solar, electric vehicles, batteries, more efficient buildings. How does the tax code treat them? How does the regulatory process treat them?

So here’s what we believe: If we got equal treatment that reflected the hundred-year money head start we gave the competitors, the new technologies would bury the old technologies. But you better be sure of one thing, they’re not going to give up their old tax breaks. And you can also be sure they’re going to fight as hard as they can for the new industries to get their tax breaks on a permanent basis that sends predictable signals to the marketplace, because they know that wind and solar has already dropped below coal, and dropped below nuclear, and dropped below other sources of energy generation.

And it’s terrifying them, because I’ll tell you one thing: The existential threat is to the Koch brothers’ business model. It’s to ExxonMobil’s business model. That’s what’s really driving this debate. They’re pouring—they’re pouring hundreds of millions of dollars into this fight against the Green New Deal right now. And it’s going to have—it’s going to have billions of dollars because this thing is working. This revolution has taken place. And by the way, it’s not just a resolution. It’s a revolution we’re talking about here—complete revolution in the way in which we generate electricity.

And it’s frightening the board rooms of this country. So they have to—they can’t win on the facts. So they call the Green New Deal socialism. Oh, it’s socialism. Well, if tax breaks for oil, and gas, and coal, and nuclear for a hundred years is socialism, well, give us some of that socialism. But they call it capitalism, so we’ll call it capitalism. Give us some of that capitalism. If that’s what it is, you give it to us too. Give it to our companies. And then our private sector companies, with those benefits, will deploy the wind, the solar, the all-electric vehicles, the charging stations, the new building materials, the doubling the efficiency of every new building in our country.

And then, slowly but surely, these companies, the old industries, are going to be saddled with stranded assets that they’ll have to report to the Securities and Exchange Commission. And they really dread that moment, where they have to say that actually our business model is starting to collapse. So I guess from my perspective, yes, it’s a public-private partnership. But we need the same kind of public investment, you know, that we’ve had for the existing mature industries.