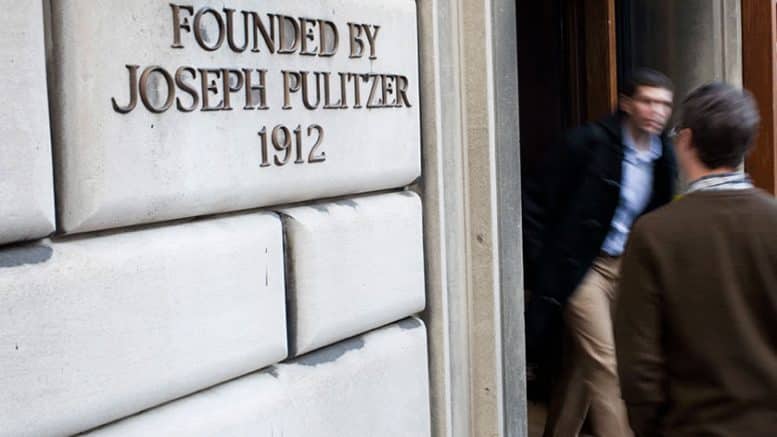 Google and Facebook have committed over $500 million to various journalism programs around the world. There will be no discussion about what fake news is, but only that it disagrees with Technocracy and societal engineering. This gives these two companies almost total control in controlling public opinion and behavior. ⁃ TN Editor

In March, Google announced with much fanfare the launch of the Google News Initiative, a $300 million program aimed at “building a strong future for journalism,” as the company put it. That came on top of the previous Digital News Initiative, which was set up by Google in 2015 and included a $170 million innovation fund aimed at the European media industry.

Facebook, too, has been funneling money into journalism projects, including the News Integrity Initiative—a $14 million investment in a project run by City University of New York—and the Facebook Journalism Project, a wide-ranging venture the company says is designed to help media companies develop new storytelling tools and ways of promoting news literacy.

Taken together, Facebook and Google have now committed more than half a billion dollars to various journalistic programs and media partnerships over the past three years, not including the money spent internally on developing media-focused products like Facebook’s Instant Articles and Google’s competing AMP mobile project. The result: These mega-platforms are now two of the largest funders of journalism in the world.

The irony is hard to miss. The dismantling of the traditional advertising model—largely at the hands of the social networks, which have siphoned away the majority of industry ad revenue—has left many media companies and journalistic institutions in desperate need of a lifeline. Google and Facebook, meanwhile, are happy to oblige, flush with cash from their ongoing dominance of the digital ad market.

The result is a somewhat dysfunctional alliance. People in the media business (including some on the receiving end of the cash) see the tech donations as guilt money, something journalism deserves because Google and Facebook wrecked their business. The tech giants, meanwhile, are desperate for some good PR and maybe even a few friends in a journalistic community that—especially now—can seem openly antagonistic.

Given that tangled backstory, it’s no surprise the funding issue is contentious. Should media companies really be involved in rehabbing the images of two of the wealthiest companies on earth, especially when they are fundamentally competitors? Yet, given the financial state of journalism, wouldn’t it be irresponsible not to take the funds?

The reality is that even if the money achieves some good, and even if there are no strings attached (which both companies insist is the case), accepting the largesse of Facebook and Google inevitably pulls the media even further into their orbit. It may not have a direct effect on what someone writes about or how a topic is covered, but it will undoubtedly have a long-term effect on the media and journalism. Are the tradeoffs worth it?

Even some of the people who benefit  from the money say they are torn between the desire for badly needed funding that can be put towards a positive purpose, and the sinking feeling that they are being drawn deeper into a relationship with a tech company that has a huge amount of power, and may ultimately use it in ways that are antithetical to journalism. In other words, they worry about being pawns in a PR game.

A former Google staffer who worked on the company’s media programs says even he feels conflicted about the practice. While many of the funded projects are worthwhile, he says, the result is that “a bunch of well-meaning people with good intentions get the money, and slowly they get sucked into a corporate machine that doesn’t have their best interests at heart.”

University of Virginia media studies professor Siva Vaidhyanathan says both Facebook and Google may care about journalism and want it to be healthy, “but they want that to happen on their own terms, and they want that to happen within an ecosystem dominated by these two companies. The British Empire wanted trains in Kenya and India to run well, too. So their concerns are sincere, but the effect is more often than not a deeper immersion in and dependence on these platforms.”

Vaidhyanathan sees an inherent conflict in accepting money from Facebook or Google because “these are two companies that directly compete with major publications for advertising revenues. So you’re basically going into a partnership with a competitor—a competitor that has a significant competitive advantage in terms of price, in terms of scale, in terms of technological expertise. So is that a good business decision? Increasingly, journalistic institutions are feeding the beasts that are starving them.”

According to one estimate by a media research firm, Google and Facebook will account for close to 85 percent of the global digital ad market this year and will take most of the growth in that market—meaning other players will be forced to shrink. That includes many of the traditional publishers and media outlets who now work with them.