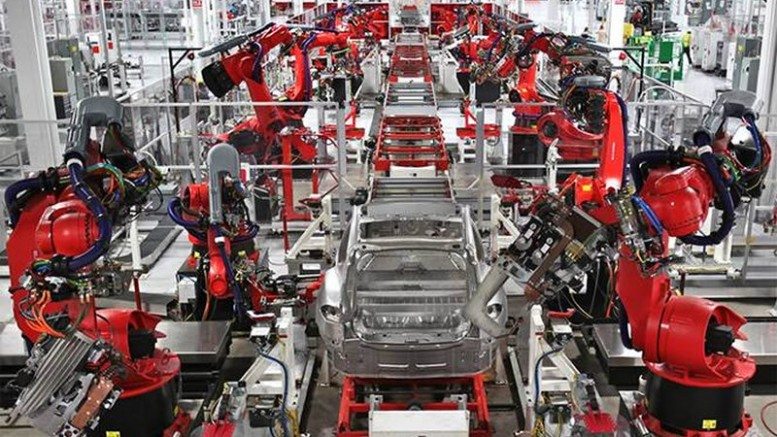 Why? Because robots will do all the work faster and much more efficiently than humans. This is the epitome of the Technocrat mindset… who needs humans, anyway? ⁃ TN Editor

For decades, a big trend in manufacturing has been the gradual automation of the factory floor. Robots play a major role in making advanced products today — they’re fast, clean and efficient. But Tesla chief executive Elon Musk wants to take this to a whole new level with the factory producing the upcoming, low-cost Model 3, turning “the machine that makes the machine” into an “alien dreadnought.”

Not literally. The factory isn’t going to become self-aware and turn on its masters; after all, Musk is an avowed skeptic of the kind of general artificial intelligence that could enable killer machines. But the term “alien dreadnought,” Musk told analysts on a conference call Wednesday, refers to what the factory will look like once it’s fully developed in around five years. Its visage will likely inspire something between wonder and terror.

The machine will ultimately be so complex that no humans will be expected to operate it directly, or to participate in the actual building of each Model 3.

“You really can’t have people in the production line itself,” said Musk. “Otherwise you’ll automatically drop to people speed.” (He didn’t elaborate on how much faster these machines will be able to work.)

With Tesla coming under increasing pressure to meet its production targets, Musk’s factory will need to move at much greater than “people speed” if it wants to satisfy demand. There’ll still be people working in the factory, though, mostly overseeing the robots and making sure everything is running at peak efficiency.

Anyone interested in the 4th industrial revolution should watch the video: Humans Need Not Apply. It’s only like 15min and would be great to introduce friends/family not familiar with the topic.