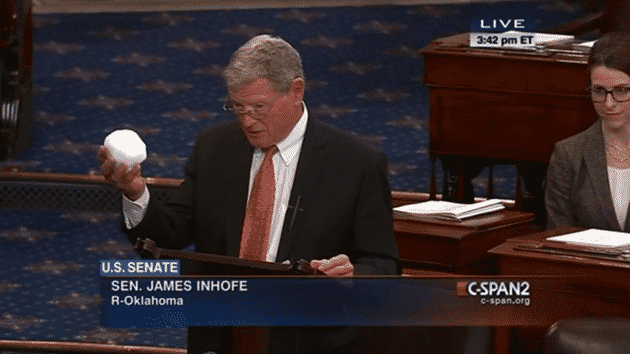 TN Note: Calls for punishment and retribution against those who dispute or resist the idea of man-made global warming are increasing at an alarming speed. While people like Kraft and Al Gore demand that the “science is settled”, they ignore the very orthodox philosophy of science that by definition, it is never settled. To suppress scientific dissent is a denial of free speech.

Note: Michael Hart’s story was summarily removed from the original website, probably because of backlash from public readers.

Most of us recognize the value of science in dealing with complex problems that pose significant risks to public health and well-being.

Thus we expect reputable science to be reported and used in helping us make difficult policy choices, such as what to do about climate change.

Scientific findings and associated uncertainties should be scrutinized carefully and debated vigorously within the scientific community and among the public.
However, denying the best scientific evidence we have is neither smart nor safe. It could lead to greater societal harm than if we had taken sensible action when reliable knowledge was first available.

Dismissal of well-established climate science has parallels to decades of debate over tobacco use and its effects on health. Tobacco companies long denied any causal relation between smoking and disease even when their own studies showed the opposite to be true.
Similarly, some fossil fuel companies for decades publicly rejected established climate science and the role of burning fossil fuels in anthropogenic climate change while their internal studies confirmed both.

The tobacco companies eventually paid a steep price for their actions. In 1999, the Justice Department filed a civil lawsuit against them, charging that they “engaged in and executed” a “massive 50-year scheme to defraud the public, including consumers of cigarettes,” in violation of the Racketeer Influenced and Corrupt Organizations Act, or RICO.

Specifically, the lawsuit said the companies engaged in a conspiracy to launch a public relations campaign challenging scientific evidence that demonstrated the health risks of smoking at the same time that their own research confirmed smoking’s danger.

The tobacco companies lost the suit. The federal courts found them in violation of RICO, in particular for fraudulently covering up scientific evidence of health risks linked to smoking. The courts rejected the tobacco companies’ argument that their statements were protected under the First Amendment’s guarantee of free speech.

Is there a parallel to current controversies over climate change science? Some members of Congress say there is. Members of Congress have asked the Justice Department to pursue charges under RICO against major fossil fuel companies for knowingly deceiving the public — and investors — about the dangers of climate change when their own studies showed the reality of the threat. Under questioning by Sen. Sheldon Whitehouse, D-R.I., Attorney General Loretta Lynch revealed she has referred the matter to the Federal Bureau of Investigation for study.

In addition, in late March, more than a dozen state attorneys general meeting in New York also said they would “aggressively” investigate whether fossil fuel companies misled the public and investors about the risks of climate change. Several state attorneys general already have initiated such investigations under consumer and investor protection laws.

Some ask whether such inquiries should be limited to fossil fuel companies. What about extending the liability, they say, to certain think tanks and advocacy groups?

Michael E. Kraft is a professor emeritus of political science and public and environmental affairs at the University of Wisconsin-Green Bay.

The link for the full Climate Inquisition story doesn’t function.

The ORIGINAL story was summarily removed from the original website, probably because of backlash from public readers.

During the seventies, the most renowned scientists warned that by 2010 New York harbor and the Great Lakes would be frozen over. So much for that “global cooling” garbage, and so much for this “global warming” garbage. Mother Nature will do whatever she wishes regardless of us.

That professor is a fascist

I think the author leaves out the all important “man” in climate change… The debate needs to be made if man made climate change can be combated, and if it really exists.

Another Nazi in the room?

Is this yet another Nazi minded Nut case?

Punishing people for dissent…hmmm…I thought that was the public’s job; the checks that bring balance. When I first read the header I remembered when Nikita Khrushchev came and toured Canada after which he publicly stated, “Land of the free, everywhere in chains…” (paraphrased)…