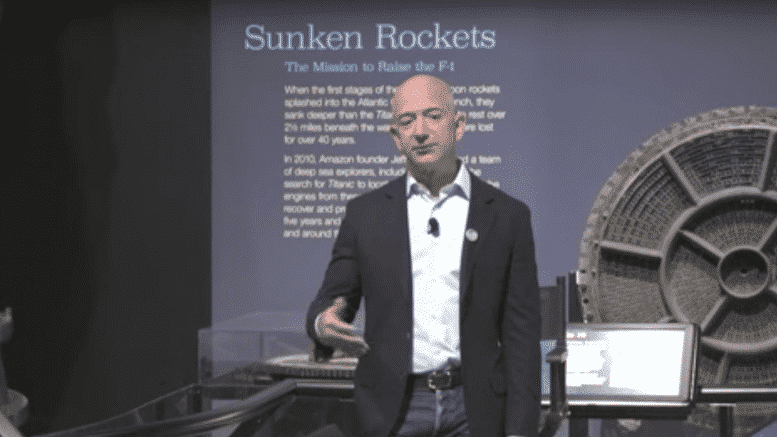 Many tech moguls have joined the apparent cult that seeks to leave planet earth and colonize other planets like Mars or the Earth’s moon. Amazon’s Bezos is the second-richest person on earth and wants to use robots to build out the moon. Don’t worry, he says, Amazon will be able to deliver products to the moon. Bon voyage, Jeff. ⁃ TN Editor

SpaceX billionaire Elon Musk may have his heart set on building a city on Mars, but Amazon billionaire Jeff Bezos’ space vision looks closer to home. He’s gazing at the moon.

“I think we should build a permanent human settlement on one of the poles of the moon,” Bezos said today during a Q&A with kids at Seattle’s Museum of Flight. “It’s time to go back to the moon, but this time to stay.”

Bezos has talked about moon missions before, and he’s even told NASA that his Blue Origin space venture could make Amazon-like deliveries to the moon, as part of a program called Blue Moon.

Today he went into more detail about his space aspirations when students asked him questions at the Museum of Flight’s “Apollo” exhibit. Bezos’ backdrop for the event included the decades-old pieces of Saturn V rocket engines that he arranged to have recovered from the Atlantic Ocean, plus an intact, never-flown engine of the same type.

Bezos said his dreams of spaceflight were fostered at the age of 5 when he watched NASA astronaut Neil Armstrong take humanity’s first steps on the moon in 1969. Now he’s able to follow through on those dreams – in large part because of the success of Amazon, the online retail company he founded in 1994.

A couple of months ago, Bezos acknowledged that he’s funding Blue Origin to the tune of a billion dollars a year, fueled by his sales of Amazon stock.

Blue Origin is ramping up its employment count and making progress on two big projects: the New Shepard suborbital spaceship, which has made five successful test flights to space and back; and the New Glenn orbital rocket, which will make use of Blue Origin’s BE-4 rocket engine.

New Shepard could start flying passengers as early as next year, which would provide opportunities for suborbital space experiments as well as space tourism.

“There’s a long history of tourism and entertainment driving innovations in technology,” Bezos pointed out. For example, barnstorming and joyrides helped sustain pilots and airplane-makers in the early days of aviation. Today, advances in machine learning, computer vision and artificial intelligence are being driven by improvements in graphics processing units, or GPUs.

“Why were GPUs invented? For one purpose, and one purpose only: They were invented by Nvidia for playing video games,” Bezos said.

On the orbital front, Blue Origin is currently testing the BE-4 engine and building a multimillion-dollar production facility and launch center in Florida to accommodate New Glenn rockets.

“That vehicle will fly in in 2020 for the first time,” Bezos said. Blue Origin already has lined up its first customers for New Glenn satellite launches in the early 2020s.