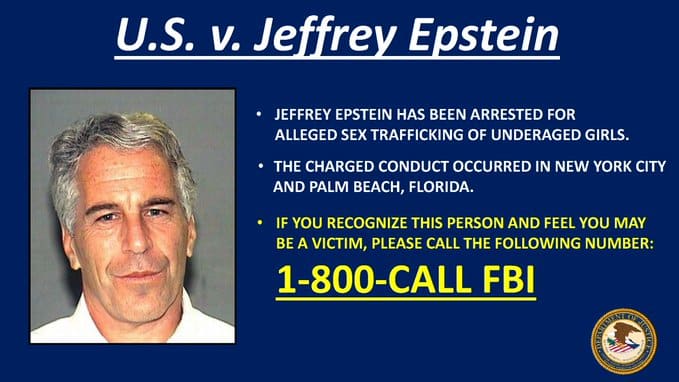 Please Share This Story!
PDF 📄
‘Birds of a feather, flock together.’ Some current and former members of the elitist Trilateral Commission who participated in Epstein’s follies are likely very nervous that he will ‘flip’ and expose their debauchery, if not their sexual felonies.

The Trilateral Commission was the principal architect of Sustainable Development and Agenda 21, using the United Nations to blanket the planet. The UN has had its own share of sexual scandals as well. ⁃ TN Editor

For decades, Jeffrey Epstein, the finance whiz who has been charged with sex trafficking, moved with open ease between the planet’s highest echelons of power and what prosecutors portray as a sordid world of recruiting and sexually abusing teenage girls.

He met with leaders of the nation’s top universities and research labs, traveled with presidents and princes, and managed money for leading business figures. He said the minimum investment he would handle was $1 billion.

Even as dozens of women were looking to police, prosecutors and courts to hold Epstein to account for his alleged sexual abuses, he was amassing a stunning list of contacts and, in some cases, defenders across the worlds of Hollywood moviemaking, medical research, diplomacy, finance, politics and law.

From humble beginnings in Brooklyn’s Coney Island as the son of a parks worker, Epstein, a college dropout, became a crackerjack trader on Wall Street — a math genius who taught at a Manhattan private school until he was offered a job at Bear Stearns in 1976. He made lots of money for some of the firm’s wealthy clients, and in 1981, he set out on his own, becoming a financial adviser to Leslie Wexner, founder of the Limited retail empire.

Before long, Epstein, now 66, was not just helping the rich get richer but was building his own fortune — and flaunting it with a dazzling array of properties and perks. His house on Manhattan’s Upper East Side was said to be the largest private home in the city, valued at $77 million; his estate in Palm Beach, Fla., rivaled those of Donald Trump and other billionaires.

Epstein used his money to construct a worldwide network of contacts. He donated large sums toward neuroscience research at Harvard and a California lab. He invited researchers to his New York house and talked math with them over equations scrawled on a blackboard in his dining room. He flew former president Bill Clinton and actor Kevin Spacey to Africa to promote AIDS awareness. He was a member of the Trilateral Commission and the Council on Foreign Relations.

Well now, isn’t this interesting. Let’s just wait and see if his re-arrest is a show enacted for the public to placate the victims of Epstein’s sick-o network of politicos, law enforcement, government elected officials, military, entertainment moguls and royals to name a few or if the arrest is real. If so, he will become a direct threat to them all. If its a show his clients names and their actions will be protected. Especially those who have had “documented use” of his services for the purpose of rape and molestation of innocents. Watch and wait. Epstein’s offenses may also… Read more »

Epstein is dead. Certainly hate to quote myself but CALLED IT exactly a month ago, as did others.

Suicide? The “authorities” involved here are liars. All we have is their word and it’s NO GOOD. As always, it’s a suicide death. This time its efficacy was bolstered by a previous fake suicide attempt not long ago. We all know that’s a LIE. It’s not right wing. It’s not left wing. Epstein threatened a worldwide clientele who wanted him kept quiet. People on both sides of the politico aisle are involved here. Finally, something they could agree on–silence Epstein.