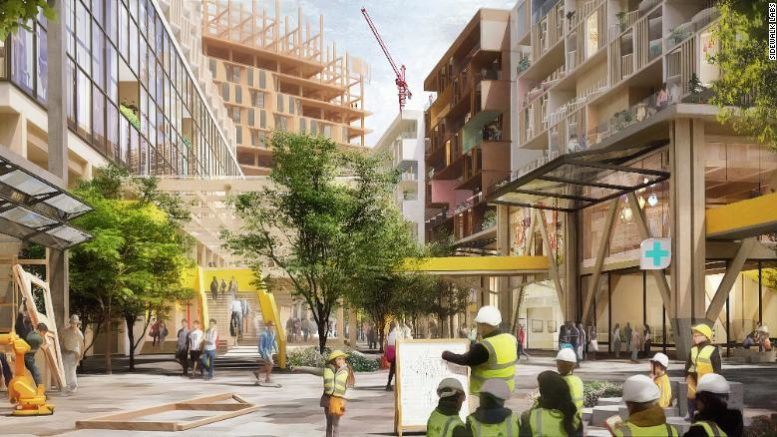 Please Share This Story!
PDF 📄
Smart City designer Sidewalk Labs is owned by Alphabet and is a sister company to Google. The more they try to defend themselves over data collection, the more skepticism arises in the public eye. ⁃ TN Editor

Alphabet’s plans to develop a Toronto neighborhood could set a dangerous precedent for the future of data-driven cities, according to data governance experts.

The report, weighing more than 14 pounds, exhaustively detailed the perks of Alphabet’s vision, including streets without traffic congestion and air pollution, as well as inventive ways of dealing with harsh weather.

But when it came to discussing the handling of people’s data, Alphabet offered only a handful of pages with few new details. Sidewalk Labs describes the creation of an independent agency to manage data collection agreements with companies and make sure the collection is beneficial for the community.

Pedestrians walking in the neighborhood shortly after it launches will likely be tracked as they walk down streets, enter certain stores and spend time in parks.

But it’s not just about the data that will be collected about any given visitor on day one. It’s the risks we don’t even know about yet, the ones that may accrue over time as data collection broadens and gets more powerful. Innovations such as self-driving cars and drones will create new ways to collect data. Businesses, including Sidewalk Labs and others, will want even more data, and it’s difficult to predict what all of the new, data-collecting innovations will be.

Recent scandals, from the Equifax hack to Facebook’s Cambridge Analytica debacle, have highlighted the importance of protecting data. Sidewalk Labs plans to build a neighborhood “from the Internet up,” adding sensors that will turn streets and sidewalks into a digital space, increasing the opportunity for privacy issues, discriminatory algorithms and data breaches. Sidewalk Labs describes data being collected everywhere from building lobbies and retail stores to ride-hail vehicles, parks and markets, but no way to opt out entirely.

Sidewalk Labs outlines a list of initial data plans, including transportation data from cars, bikes and pedestrians to optimize parking prices, traffic lights and vehicle speeds. It also plans to collect data on foot traffic in retail stores, weather, air quality, waste classification, and other uses it expects can benefit the neighborhood. Sidewalk Labs would dot the neighborhood with a standardized physical mount, what it calls an “urban USB port,” to make it easy and affordable for other companies to deploy additional sensors such as cameras for digital innovations. The independent agency governing data would approve companies to do so.

Critics say this data could create hardships for marginalized groups if used in certain ways, such as law enforcement more easily tracking and deporting undocumented immigrants.

They also warn there’s a wide gap in technological expertise and financial resources between Alphabet (GOOG) and Toronto. The city risks agreeing to a neighborhood that favors Alphabet’s business interests and will feel more like a surveillance state than a smart city.

Alphabet needs to win the approval of the city council and Waterfront Toronto, the government agency overseeing the development. To do so Sidewalk Labs committed more than $50 million to creating its massive plan in the last 18 months. Toronto expects to spend up to $800,000 evaluating the plan, including only $50,000 on data governance.

“Civil society is outgunned,” Alex Ryan, vice president of the Mars Solutions Lab, a Toronto technology incubator, told CNN Business. “There is this asymmetry in being able to approach this topic, and as a result, we’re ending up with a very unbalanced conversation.”

Sidewalk Labs said in a statement to CNN Business that the project is not about data, and that the governing body handling data must be independent and set its own policies and rules.