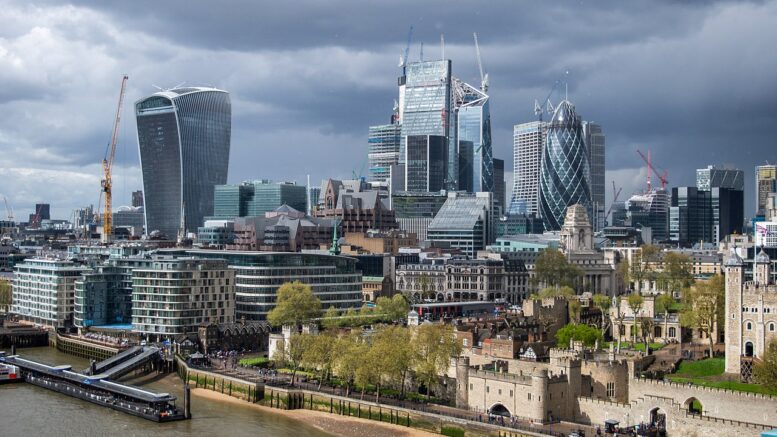 Posted By: Matt Nilsson via What About the Roads? October 1, 2021

Please Share This Story!
PDF 📄
The tiny City of London, just one square mile in size, is where all the banks and financial institutions are located. This is the yeast that leavens the whole lump of dough, as Greater London and all of England have slipped into Technocrat tyranny. National leadership reflected this with the elections of Theresa May and then Boris Johnson, both having succumbed to the forces of Techno-Populism. ⁃ TN Editor

Last week we covered Telosa, a technocratic metropolis slated to be home to 5 million people by 2060. Previously we’ve investigated plans to turn Nevada into a hub of technocracy. These stories need telling but we by just looking into the future we can miss sight of the fact that the truth the technocratic city is already here.

Conversely, London is also known as a place where freedom and privacy are nearly extinct. It is one of the world’s most surveilled cities, ranking second globally in CCTV cameras per square (1,138) and third in CCTV cameras per person (73 per 1,000). The city’s police have recently purchased facial recognition technology in order to process historic images from these CCTV cameras as well as social media platforms and other sources. This is in addition to the Live Facial Recognition (LFR) technology already deployed in the city.

But this is just one small part of life in one of the world’s most technocratic and surveilled cities. In 2018 the Mayor of London, Sadiq Khan launched Smarter London Together, his roadmap to make London “the smartest city in the world.” This initiative builds on an older so-called roadmap from 2013, the Smart London Plan which was rolled out by then mayor and current Prime Minister, Boris Johnson. This perfectly illustrates how politicians may come, go, and move around while the technocratic agenda moves forward without resistance.

Jumping to 2020 we find the Smart London Board, the group which helps bring the objectives outlined in the Smarter London Together road map to fruition, developing the Emerging Technologies Charter,  “a set of criteria that digital innovations based on artificial intelligence (AI), blockchain, virtual reality and more should meet if they are deployed in the capital.” Meeting the criteria established by this charter is not mandatory in order for new technology to actually be deployed however. This is important to note in order to properly interpret what is laid out in this document.

The most recent version of the charter was published last week. The Mayor, an avowed globalist committed to fulfilling to The Great Reset agenda, says that the charter will play a significant role in the economic and social recovery of London. Let’s examine what that recovery will look like.

The document opens with praise for London already being one of the leading technocratic cities on the planet, highlighting the city as a hub for the research, development, and innovation of 5G, the Internet of Things (IoT), and artificial intelligence (AI). The charter claims this infrastructural is all in place to insure fast download speeds and rapid data processing capabilities. In reality, this is the infrastructure needed for the ruling class to manage all aspects of life, including the human body itself.

The charter then goes on to list the four principles for implementing technology in London.

When trialling and deploying emerging technologies, the government will aspire to “work in the open” wherever possible and will describe what the technology is, what it can do, why it is being used and, “where appropriate”, the legal and ethical basis for doing so in what they call “Plain English.”

Translation: the government will work behind closed doors as much as possible, illegally and unethically as often as they feel like it.

When the government says Plain English they mean short words and short sentences meant for anyone with a 9 year old’s reading comprehension skills. In other words, the government will be deploying highly complicated technology, only telling you about it when they feel like it, and when they do, they’ll speak to you like you’re a child.

They also totally promise to speak with local communities, protect personal data, and give regular updates about their undertakings in the name of being open.

There is no mention about being open about the negative effects of 5G on the human body or ethical problems surrounding virtual reality.

The second principle of the Emerging Technology Charter contains the usual banal platitudes about diversity and inclusiveness found at the center of any globalist or technocratic statement. However, there is one very telling detail here which reveals how this agenda paves the way for a two-tiered society. Amidst all the concerns about considering people from all walks of life, there is room to exclude others:

For public bodies, setting out how the technology or service meets the Public Sector Equality Duty for example…if certain groups are excluded from the benefit of new technologies, the technology should have a clear reason why it does not serve these groups.

Who are these certain groups? The charter doesn’t clarify but at a time when the UK government is currently trying to bypass Parliament in an effort to implement vaccine passports via the backdoor it doesn’t take a huge stretch of the imagination to know who this is reserved for. In this technocratic surveillance system a resident of or visitor to London will need a digital vaccine certificate to take part in public life. If this comes to fruition it is only a matter of time until the vaccine certificate is rolled into a digital wallet for a blockchain-based Central Bank Digital Currency.

Today it is just different colored wristbands to differentiate between “vaccinated” and “unvaccinated” students. Tomorrow, with just the flip of a switch or push of a button these bureaucrats behind the Emerging Technology Charter and Smart London Board will be able to disconnect anyone they deem unworthy of having access to these so-called beneficial new technologies.

Be Trustworthy With People’s Data

“London requires safe, secure, and useful ways of using and sharing data which build trust among our partners and citizens,” claim the authors of the charter. The principle goes on to list all of the ways in which they promise to ethically collect, review, and store data, including biometric data.

This is perhaps the most blatantly disingenuous section of the charter. Not only because following this charter is entirely voluntary to begin with but because it leaves out two crucial facets of how data is already collected and used in the United Kingdom.

The first is the Government Communications Headquarters (GCHQ), the English equivalent of the National Security Agency (NSA).  The GCHQ collects, reviews, and stores an incomprehensible amount of data on the British public with little to no accountability or oversight and yet the Emerging Technology Charter makes no mention of this fact. So, even if those who follow the charter absolutely respected the privacy of Londoners it would be a moot point unless the mass surveillance of the CQHQ was ended.

Second, is the Investigatory Powers Act 2016, also known as the Snoopers Charter. This law enables the government to lie in court with impunity by enshrining parallel construction in law.  It works like this:

Parallel construction occurs when the Government learns of criminal activity through one source, but then gives the information to a law enforcement agency to “reconstruct” the investigation so that the origin of that second investigation is different from the original source.

Again, even if the Emerging Technology Charter was made mandatory and truly protected the privacy of everyone in London it wouldn’t prevent the government from using that data to it’s advantage with the members of the public none the wiser as to how it was really collected.

The lives of all Londoners will be recorded, listed to, analyzed, catalogued, tracked, traced, and controlled in Khan’s smart city but at least it will be done sustainably. And by sustainably we are to presume this means whatever it takes to further centralize and control the resources of the planet into fewer and fewer hands as part of what James Corbett calls the The 100 Trillion Dollar Bankster Climate Swindle.

The situation in London illustrates just how easily new technologies of control can be slotted into our existing infrastructure. That way, neither the residents riding the Underground or the tourist snapping pictures of Big Ben and Buckingham Palace can just go about their business without feeling the noticing the enslavement grid being built around them.  Until one day when they can’t board their flight for lack of a health certificate, buy tickets to a play because the CCTV caught them running a red light, or buy meat because they’ve exceeded their monthly sustainable food allotment. But by then it’s already too late.

In March 2007, British newspaper The London Evening Standard pointed out that there are 32 CCTV cameras within 200 metres of another residence George Orwell once called home – 27B Canonbury Square in north London. A CCTV camera can also be spotted on the corner of Plaça de George Orwell in Barcelona. This is per the fasco-Marxist https://factcheck.afp.com/no-there-isnt-cctv-camera-outside-house-where-george-orwell-lived And the even more disgusting https://www.huffpost.com/entry/orwells-home-surrounded-b_n_44694 But few to no CCTV in front of his old 22 Portobello Road in London, on Google Street View allows us to verify these claims by viewing the front of the house with the blue plaque… Read more »

California to Require All Schoolchildren to Get COVID Shots + More - altnews.org

I’m British and like many Brits, I consider Sadiq Khan to be an intellectual midget. He’s a place-man, and almost certainly got elected through gerrymandering and illegal block voting by the muslim community. He does not serve all Londoners. Khan does not have the intellectual equipment to understand any of this new technology. Listen to a few of the London Assembly YouTube videos on Assembly meetings where he holds forth. It’s dismal and depressing. In fact none of these ‘innovators’ have any idea about the consequences of 5G rollout. Read The Invisible Rainbow, by Arthur Firstenberg, a meticulously researched book… Read more »

[…] London Slips Into Technocracy, Becomes Blueprint For The World […]