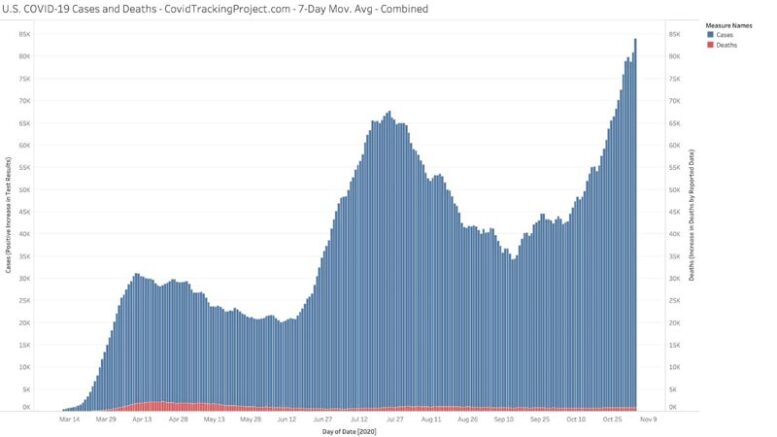 Please Share This Story!
PDF 📄
The Technocrat propaganda machine spins misinformation, disinformation and outright lies in order to drive people toward their endgame of Technocracy. Their entire narrative is in shambles, but they march on regardless. ⁃ TN Editor

According to media reports, COVID-19 “cases,” meaning positive PCR test results, are soaring across the U.S. and around the world, leading to the implementation of measures that in some cases are stricter than what we endured during the initial wave.

However, as detailed in several recent articles, including “Why COVID-19 Testing Is a Tragic Waste,” PCR tests are being used incorrectly, resulting in the false appearance of widespread transmission.

In reality, the vast majority of people who end up with a positive test will not develop symptoms and aren’t infectious. Needless to say, if you’re not infectious, you pose no health risk to anyone, and being placed under what amounts to house arrest is nothing but cruel and unusual punishment for no reason whatsoever.

Positive Test Rates Have No Bearing on Mortality Rates

In The Highwire report above, Del Bigtree breaks down how excessively high test sensitivity leads to falsely elevated “case” numbers that in reality tell us nothing about the situation at hand. As noted by Bigtree, what’s missing from the COVID-19 conversation is the actual death rate.

“If COVID is a deadly virus, what should we see when cases increase?” he asks. The answer, of course, is an increase in deaths. However, that’s not what’s happening.

Aside from a small bump at the beginning, when doctors were unsure of the appropriate treatment and some states recklessly and irresponsibly sent infected patients into ill equipped nursing homes, the death rate has remained relatively flat while positive test rates have dramatically risen and fallen in intervals.

In the video, Bigtree features a November 4, 2020, tweet1 by White House coronavirus adviser Dr. Scott Atlas showing the number of positive tests (aka “cases”) in blue and COVID-19 related deaths in red, since the start of the pandemic up until the end of October 2020. As you can see, there’s no correlation between the positive test rate and subsequent deaths. 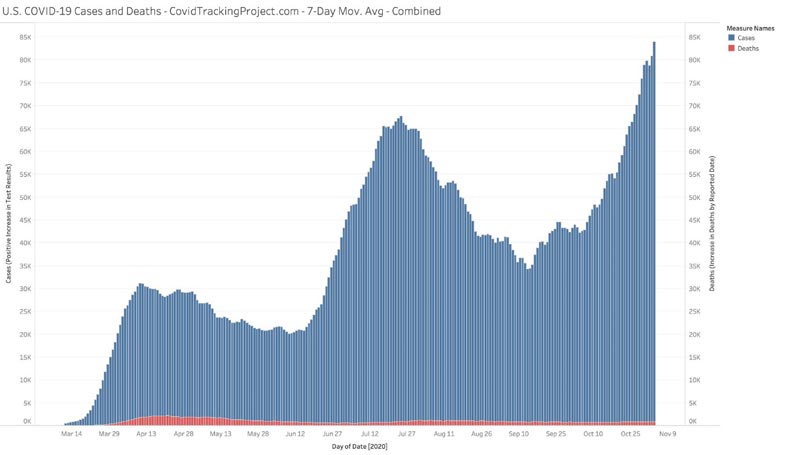 One of the explanations for why positive test rates and mortality do not go hand in hand is the simple fact that a vast majority of those testing positive for SARS-CoV-2 are asymptomatic. They simply aren’t sick. The PCR test is merely picking up inactive (noninfectious) viral particles.

In one study,2 which looked at pregnant women admitted for delivery, 87.9% of the women who tested positive for the presence of SARS-CoV-2 had no symptoms. Another study3 looked at a large homeless shelter in Boston. After a cluster of COVID-19 cases was observed there, researchers conducted symptoms assessments and testing among all guests residing at the shelter over a two-day period.

Of 408 people tested, 147, or 36%, were positive, yet symptoms were conspicuously absent. Cough occurred in only 7.5% of cases, shortness of breath in 1.4% and fever in 0.7%. All symptoms were “uncommon among COVID-positive individuals,” the researchers noted.

During a June 8, 2020, press briefing, Maria Van Kerkhove, the World Health Organization’s technical lead for the COVID-19 pandemic, made it very clear that asymptomatic transmission is very rare, meaning an individual who tests positive but does not exhibit symptoms is highly unlikely to transmit live virus to others.

“We have a number of reports from countries who are doing very detailed contact tracing. They’re following asymptomatic cases, they’re following contacts, and they’re not finding secondary transmission … it’s very rare, and much of that is not published in the literature,” Van Kerkhove said.

Just one day later, Dr. Mike Ryan, executive director of the WHO’s emergencies program, backpedaled Van Kerkhove’s statement, saying the remarks were “misinterpreted.”4 Needless to say, when you’re trying to justify the implementation of a vast surveillance network, it’s no good to admit a vast majority of people are having their privacy infringed upon for no good reason whatsoever.

Asymptomatic People Pose No Risk to Others

Most recently, a study5 in Nature Communications assessed the risk posed by asymptomatic people by looking at the data from a mass screening program in Wuhan, China.

Not a single one of the 1,174 people who had been in close contact with an asymptomatic individual tested positive.

In all, there were zero symptomatic cases and only 300 asymptomatic cases detected. (The overall detection rate was 0.3 per 10,000.) Importantly, not a single one of the 1,174 people who had been in close contact with an asymptomatic individual tested positive.

Additionally, of the 34,424 participants with a history of COVID-19, 107 individuals (0.310%) tested positive again, but none were symptomatic. As noted by the authors:6

Interestingly, when they further tested asymptomatic patients for antibodies, they discovered that 190 of the 300, or 63.3%, had actually had a “hot” or productive infection resulting in the production of antibodies. Still, none of their contacts had been infected.

In other words, even though asymptomatics were (or had been) carriers of apparently live virus, they still did not transmit it to others. As noted by the authors, “there was no evidence of transmission from asymptomatic positive persons to traced close contacts.” They further added:7

“Compared with symptomatic patients, asymptomatic infected persons generally have low quantity of viral loads and a short duration of viral shedding, which decrease the transmission risk of SARS-CoV-2.

Reinfected Individuals Are Not Infectious Either

The same held true for people who tested positive a second time after having recovered from an active infection.

“Results of virus culturing and contract [sic] tracing found no evidence that repositive cases in recovered COVID-19 patients were infectious, which is consistent with evidence from other sources,” the authors said.8

The researchers also pointed out that virus cultures and genetic studies have shown the virulence of SARS-CoV-2 appears to be weakening over time, and that newly infected individuals are more likely to be asymptomatic and have a lower viral load than the cases seen earlier in the outbreak.

What does all of this tell us? It tells us there’s no reason to panic simply because the number of positive tests are on the rise. Remember, the more people you test using a PCR test that is set to an excessive cycle threshold, the more false positives you’ll get.

As explained in “Asymptomatic ‘Casedemic’ Is a Perpetuation of Needless Fear,” by using an excessive cycle threshold that amplifies the viral RNA to the point that it detects inactive (noninfectious) particles is at the heart of this so-called pandemic. It’s what keeps the pandemic narrative going, when in fact it’s long since over.

Interestingly, the same day the China study came out, the U.S. Centers for Disease Control and Prevention updated its guidance9,10 on mask wearing, claiming asymptomatic people account for more than half of all transmissions. Where did they get that from?

The two references listed as support for that claim include a study11 from July 2020, and CDC data that haven’t even been published yet.12 It just says it was “submitted” for publication sometime in 2020, therefore, we are unable to provide any source link. The CDC makes no mention of the China study, which included nearly 10 million individuals.

CNN, which reported the CDC’s update, parroting the idea that asymptomatic spread is why it’s so important to wear a mask, also made no mention of the landmark study from China. Curious, don’t you think? It’s almost as though the CDC doesn’t want us to know we have nothing to fear from healthy people.

Mercola: Asymptomatic People Do Not Spread COVID-19. Nobody does, as there is no coronavirus.

Covid has to be the most incompetently or else criminally managed flu in history. Mismanagement and incompetence on the part of public “health” officials throughout the world should be charged with crimes and made to pay up for the financial, social and economic devastation they have caused .

I’ve been considering the word asymptomatic as being a synonym for immunity from the virus. Immunity from getting sick or dying from covid 19. I could be wrong. But I don’t believe that a person who isn’t sick or dying from covid19 can spread that virus to sicken or kill another person who has a strong immune system. I believe it may be possible for an asymptomatic individual or anyone else to infect someone with compromised immune systems where there is an exchange of bodily fluids such as sneezing, blood transfusions or other ways that bodily fluids are transferred into… Read more »