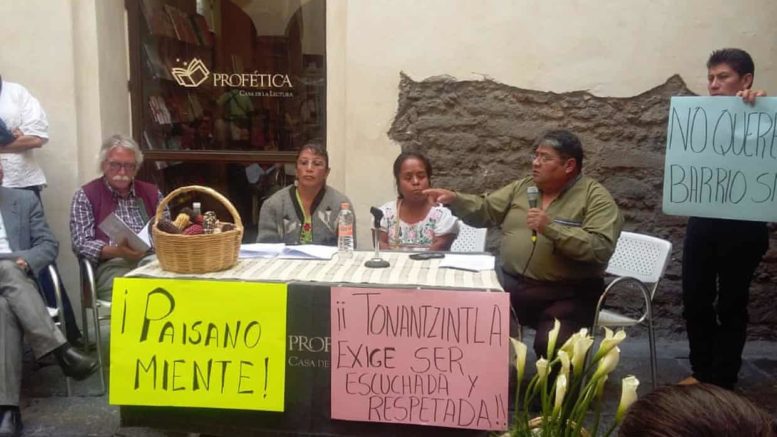 Technocrats lied, misrepresented and bulldozed their way into this small town. When citizens finally saw what was going on, and that the interlopers had no authority, they gave them the boot. Bravo! ⁃ TN Editor

Lupita Tecual Porquillo had heard a rumour that the plaza was going to be “remodelled”. The 51-year-old grocery store owner lives around the corner from the centre of Santa Maria Tonantzintla, a sleepy town in the state of Puebla, about three hours from MexicoCity. She assumed “remodelling” meant repairing the plaza’s centuries-old cobblestone pavement.

In November 2017, heavy machinery arrived to tear out the characteristic cobblestones and replace them with smooth, uniform stone tiles. On 11 January, Tecual Porquillo discovered the municipality had also knocked down the clock tower and stucco bridge – both beloved landmarks in the central plaza.

Rumours spread among the residents of Tonantzintla. They heard that a gourmet market would open along the plaza, that ticket booths would appear outside the church to charge for entry, that a building would be demolished to make room for a parking lot for tourists. Some even said that religious processions – a crucial part of civic life – would no longer pass through the plaza.

A meeting for affected residents later revealed that Tonantzintla was to become part of a pilot project: smart cities.

Smart cities integrate technology into urban infrastructure, usually to improve sustainability, maximise efficiency and minimise energy usage. It’s a strategy generally undertaken in major metropolitan areas – like Singapore, Barcelona and Seoul – with specific technologies and strategies varying from place to place. In London, for instance, it involves the use of sensor networks to monitor traffic flow and allows citizens to report graffiti using an app.

Last year Puebla’s governor José Antonio Gali Fayad announced a statewideBarrio Smart (smart city) initiative in conjunction with the organisation Alianza Smart Latam. According to the initiative’s website, the project has “the objective of constructing spaces that benefit citizens through the implementation of technology”.

But in being presented with this futuristic-sounding vision, it appears that residents of Santa Maria Tonantzintla found themselves caught in a conflict repeated the world over, between centuries-old customs and new development trends.

While smart city planning has largely been undertaken in dense metropolises, some smaller cities have embraced its ideology. The Dutch city of Eindhoven has become an emblematic example of a small smart city – it embraces urban experimentation with less than half a million residents. Key to smart city planning, though, is responding to local needs. Eindhoven’s smart city programme manager, Guus Sluijter, emphasised that the programme comes from the ground up. “Our citizens are key in addressing problems and central to solving them,” Sluijter told Smart City Hub. “We see [smart cities] becoming a society for the people, by the people, in which citizens actively identify issues in their city.”

In Tonantzintla the smart cities proposal became a lightning rod for those concerned about a development that seemed to favour outsiders rather than residents. “When politicians ask us what we want, we tell them we want a clinic, parks, things to entertain ourselves, so we don’t have to go all the way to Puebla [city] to go out,” Tecual Porquillo says.

Residents like Tecual Porquillo don’t understand the true goal of the project, says architect Victor Campos, who was involved in the design on behalf of the municipality’s secretary of public works.

“The purpose was to order the urban spaces so that they would function correctly,” he says. The tourist buses that pass through Tonantzintla for brief stints each day bring little economic benefit for the town as a whole – the tourists file into the church, file back onto the bus and leave. The plan, according to Campos, had to do with improving the streets to better regulate vehicle flow and expanding the plaza to allow for more space for local events.