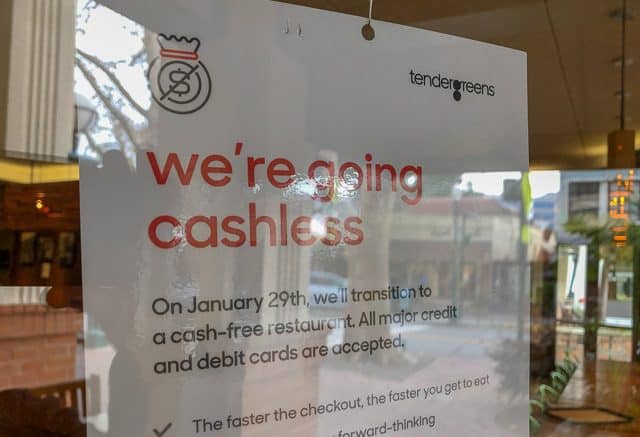 In July 2017, Visa announced it would pay restaurant owners $10,000 to go cashless, and that it had other such campaigns as well. Now many more restaurants are making the switch from cash to plastic. The global movement to strip cash out of society is driven by Technocrats who know that Technocracy cannot thrive without data from every purchase. ⁃ TN Editor

Tender Greens, with28 restaurants on the East and West coasts, is one of a growing number of eateries that are either shunning cash and only accepting credit and debit cards and contactless payment systems, like Apple Pay, or experimenting with the strategy.

While no one has kept a running count of restaurants adopting the cashless policy, interest is clearly rising. A 2016 Federal Reserve study found the number of non-cash payments — including credit and debit cards — totaled 144 billion in 2015, having grown 5.3% annually between 2012 and 2015

Sweetgreen, another salad chain on the coasts and part of the Midwest, and some independent restaurants have adopted the same policy. Two national chains are exploring it.

In January, Starbucks made one of its shops in its hometown of Seattle cashless, and Shake Shack, the gourmet hamburger chain, began testing cashless kiosks at its Astor Place restaurant in New York City in October. Both chains declined to discuss their experiments.

Restaurant owners say ordering is faster from customers who slap down plastic instead of dollars, cutting a few seconds out of the process. But most of the benefits appear to accrue to the restaurants: less time taken counting bills, reduced pilferage, no armored-car fees or fear of stickups.

It’s a risky strategy. For starters, upscale Millennials — among the most coveted of diners because of their youth and affluence — prefer to pay in cash, according to Bankrate.com data. Also, more than a third of Americans between the ages of 18 and 37 do not have a credit card.

For customers, patronizing restaurants that don’t take cash means one less payment option when they need a quick meal during an all-too-short lunch hour. Plus, it raises questions about whether it discriminates against cardless teens and the poor.

Miah Daughtery took to social media in the fall after encountering the policy at a Sweetgreen restaurant in Washington, D.C.

“There’s an assumption that people have a credit or debit card on them. If I didn’t, does that mean I wouldn’t be able to get lunch?” said Daughtery, 38.

She added that her parents grew up in an era when cash was king, so they would potentially be out of luck, too.

A committee in Chicago is weighing Alderman Edward Burke’s proposed requirement that merchants accept cash. Massachusetts has had a Discrimination Against Cash Buyers rule on the books since 1978.

“Most people who use cash are people who don’t have access to a bank account and are lower income,” said Lana Swartz, co-editor of the book Paid: Tales of Dongles, Checks, and Other Money Stuff. “One of the cornerstones of American capitalism is everyone’s money is equal.”

On January 26th of this year, my son’s debit card number was used fraudulently at the Shake Shack in NYC at the exact same time that he was filling his vehicle with gas in Idaho, where we live. Fortunately, the bank stopped the $150 Shake Shack charge before it went thru. We do not trust plastic.

Any restaurant that did that wouldn’t get my business. By law, businesses have to take cash, or did they change that law? Many small businesses don’t want to pay the credit card fee for each transaction, so they have to raise prices. I would never use debit or credit in gas stations or restaurants. There are employees that use skimmers to steal your info.

No, the law has not changed and your printed bills clearly say “THIS NOTE IS LEGAL TENDER FOR ALL DEBTS, PUBLIC AND PRIVATE”. Companies refusing to take cash need to be spanked with lawsuits and binding city council resolutions that forbid them from refusing cash.