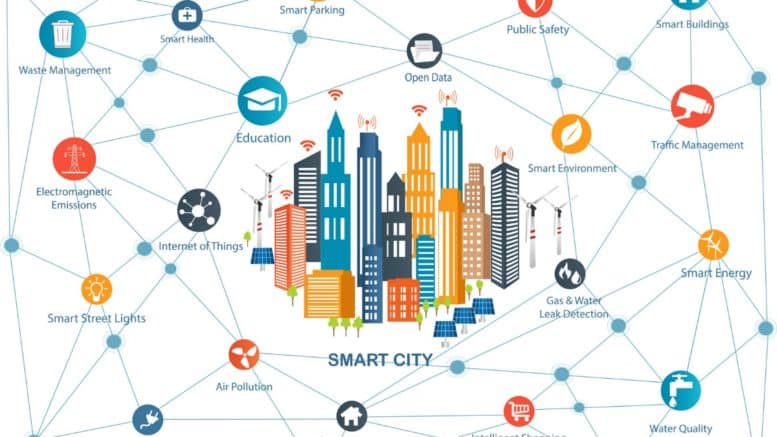 Please Share This Story!
PDF 📄
The Phoenix area Smart Region Initiative is a pilot program to see how much sovereignty can be stripped from member cities without a mass uprising by disenfranchised citizens. With no elected officials, SRI seeks domination over 22 cities and 4.2 million people to dictate uniform implementation of Smart City policies and technology.  ⁃ TN Editor

Imagine a perfect day in metro Phoenix: no traffic congestion and autonomous vehicles glide commuters through the streets, hitting nothing but green lights. The air is clean, there’s a sustainable supply of water, and everybody has access to great health care, nutritious food and the latest technologies. Sun Devil Stadium is packed with a roaring crowd, and the fans move efficiently through short lines at the concession stands and restrooms.

That picture may seem far-fetched in a region where rapid population growth seems to be stressing resources and infrastructure. But it’s all part of the vision of Dominic Papa, a third-year student at the Sandra Day O’Connor College of Law at Arizona State University.

Papa is the co-founder and executive director of the Institute for Digital Progress, a nonprofit aiming to improve the Phoenix area by transforming the region into a major hub of smart-city technology. It’s an ambitious project that relies heavily on innovation — and collaboration.

But first and foremost, what exactly is a “smart city”?

“The running joke is, you ask 10 mayors what a smart city is, you’re going to get 12 answers, because no one knows, and they’re going to change their answer after hearing everybody else’s,” Papa said. “But I would say, from a community’s perspective, it is leveraging emerging technology and data to provide more efficient, more effective services and a higher quality of life.”

A key component is what Papa calls “innovation sandboxes,” where research and pilot programs are encouraged. For an example, he points to the testing of autonomous vehicles.

“We saw what Governor Doug Ducey did by opening up Arizona, and our streets, to autonomous vehicles, and the massive economic impact that that brought to our state,” Papa said. “It’s really taking that concept and drilling down to a micro-level. So how can we open our region or ASU, our campuses, to allow for industry, entrepreneurs and even researchers to leverage our infrastructure as a proving ground to build, test and validate emerging technologies?”

“It’s 22 cities and towns, the county, ASU and industry partners coming together to intentionally accelerate our development into a smart region,” said Papa, explaining that workforce development will be a key element. “A smart region is going to demand a public-sector workforce that is educated to develop, deploy and maintain these technologies within the cities themselves. Together, ASU and IDP will train city employees on emerging technologies and digitization strategies. The goal is to create the nation’s leading public-sector workforce of the future, right here in Greater Phoenix.”

ASU at the center of it all

ASU will serve as the heartbeat of the smart-region project, playing a critical role not only in educating the future workforce, but as a research hub as well. And helping to lead those efforts is Di Bowman, a professor at ASU Law and the School for the Future of Innovation in Society, who also serves as the co-director for ASU’s Center for Smart Cities and Regions.

“ASU already has the concept of a smart campus and has been working across the different facets of the campuses to create the smart-campus environment,” Bowman said.

For example, Sun Devil Stadium is not only hosting football games, but also doubling as a research laboratory.

“One thing they’re doing there, which may seem to be more about entertainment than technology testing, is using facial-recognition software within the suites area,” Bowman said. “Guests have their faces scanned and are then matched with their celebrity doppelganger, which isn’t always the same one. So while it may seem kind of whimsical and fun — which it is — the fact that Arizona is a border state and we have an international airport suggests that this technology, once proven to be effective, could be deployed in the state by agencies to enhance public safety, which is really exciting. If, by initially deploying and testing the technology in our stadium, we can prove it is efficient and effective, we can begin to then imagine how ASU could potentially partner with entities such as Phoenix Sky Harbor to test the technology from a security perspective.”

And that’s not all that’s being tested at Sun Devil Stadium.

“You know when you go to a stadium and they hand out prizes for the section that cheers the loudest? That’s all fake right now,” said Papa, explaining that ASU partnered with Intel to develop a groundbreaking noise-detection system. “Sun Devil Stadium is the first stadium to actually use real-time noise captured through sensors to choose the correct section that was actually the loudest.”

Papa said through a phone app, ASU can then alert the fans in that section that they’ve won a prize and can pick up a free T-shirt or soft drink at a certain location within the stadium. The app could even direct spectators to the shortest concession stand lines.

Bowman said campus testing could also help the region manage its most precious resources, including water.

“We know from our discussion with political leaders across the state that water is, and will remain, a challenging issue to manage — especially given the rate at which the region is growing,” she said. “Knowing where water is being used, where it is being lost, and the volumes associated with each, allows decision makers to make better investments in and around water usage. ASU buildings and, in particular, the dorm buildings, could be utilized for pilot programs around water metering. Nobody knows how much water is really being lost in the system, so finding out more about water loss and usage could help us be smarter consumers of water and better utilize that as a resource. There is also a great fiscal reason for doing so, too.”

“ASU has the unique advantage of having campuses, with students, scattered throughout the region that act as cities in and of themselves,” he said. “If we can rapidly test innovative new technologies on these campuses, continuously measure their impact, and ultimately validate them, we can then implement these solutions into the 22 cities and towns through the smart-region initiative. Furthermore, because all cities face similar challenges, we can then export these solutions to cities and regions around the world. The smart-region framework allows us to solve urban challenges at scale and accelerate technology commercialization, ultimately creating jobs and economic growth.”

And that, Bowman says, is what a university is all about.

“It’s about doing research, it’s about deploying technologies, it’s about bringing in students across all areas of study and giving them opportunities to develop solutions and experiment with them, whether that’s in a laboratory scenario or on campus,” she said. “And we also have the capacity — which cities and towns don’t necessarily have — to examine different technologies, analyze data and work out whether what is being proposed really is the best technology for meeting the challenges within our communities, including whether or not it is acceptable to the public, or whether we need to redesign and develop more. That’s exciting.”

The push to develop and implement smart-city technology has something that so many other issues are lacking: bipartisan political support.

“That’s why we’ve been able to gain so much momentum in this area, and especially in this region,” Papa said. “Because for the left, the Democrats, this has a huge social aspect, specifically around quality-of-life and digital equity aspects. And for the right, the more conservative and Republican side, it’s about leveraging technologies to create efficiencies in government, thereby using less taxpayer dollars to deliver higher-quality services. Smart cities really hit on everyone’s ideals.”

But rapid advancements in technology can be frightening, stoking fears about privacy and safety. Eliminating red tape to encourage innovation and entrepreneurship must be balanced with just the right amount of regulatory precautions.

“I’m a person who continually stares at, and evaluates, the effectiveness of regulations in light of new and emerging technologies,” Bowman said. “My focus has, and continues to be, working out how the public sector can allow useful technologies into the market in the quickest and most efficient ways without endangering public health and safety. It’s about finding effective regulatory tools and strategies that have the necessary checks and balances that can then be streamlined in such a way that they’re not unduly burdensome.”

Papa said that’s why it’s exciting to have ASU Law play a role in the project. Especially with the law school now located in downtown Phoenix, in close proximity to the Arizona Capitol and Phoenix City Hall.

“This initiative is something that no one has tried at this scale probably ever before,” he said. “We’re talking about the fourth-largest county in the country, the fastest-growing in population, 22 separate jurisdictions, all fairly large, actually saying, ‘We’re going to work together to do this.’ It’s true that seemingly insurmountable challenges require unprecedented collaboration and no one has tried it at this scale before. There’s a new metropolitan revolution occurring in the Greater Phoenix region, and it’s being built around innovation and driven by collaboration. And while there will obviously be challenges, the potential benefits of it are incredible.”