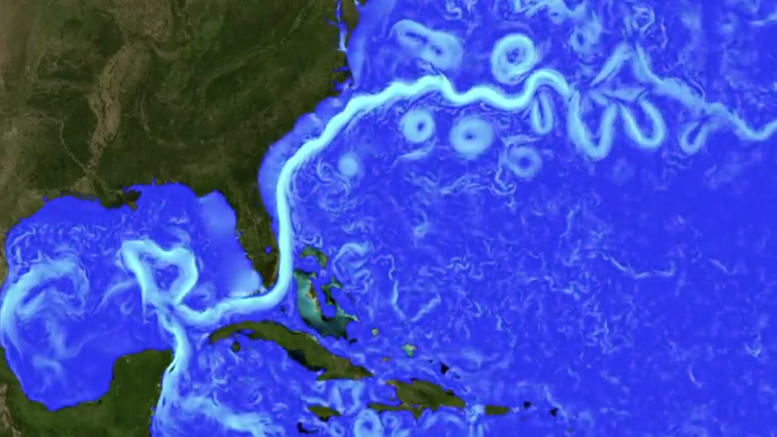 Please Share This Story!
PDF 📄
Global Warmists are in total denial, claiming that it is really global warming that is causing dislocations in the weather. Technocrats who live by their science will eventually be crushed by it. ⁃ TN Editor

Researchers have discovered that water in the North Atlantic has ‘dramatically weakened.’

The study shows the levels are at their lowest of for 1,500 years – and climate change is to blame.

Researchers warn the currents will have a ‘profound effect’ on both the North American and European climate.

The research, co-led by Drs. Christelle Not and Benoit Thibodeau from the Department of Earth Sciences and the Swire Institute of Marine Science, The University of Hong Kong, is interpreted to be a direct consequence of global warming and associated melt of the Greenland Ice-Sheet.

Slower circulation in the North Atlantic can yield profound change on both the North American and European climate but also on the African and Asian summer monsoon rainfall.

‘The AMOC plays a crucial role in regulating global climate, but scientists are struggling to find reliable indicators of its intensity in the past.

‘The discovery of this new record of AMOC will enhance our understanding of its drivers and ultimately help us better comprehend potential near-future change under global warming’ said Dr. Thibodeau.

The research team also found a weak signal during a period called the Little Ice Age (a cold spell observed between about 1600 and 1850 AD).

While not as pronounced as the 20th century trend, the signal might confirm that this period was also characterized by a weaker circulation in the North Atlantic, which implies a decrease in the transfer of heat toward Europe, contributing to the cold temperature of this period.

However, more work is needed to validate this hypothesis.

‘While we could ground-truth our temperature reconstruction for the 20th century against instrumental measurement it is not possible to do so for the Little Ice Age period.

‘Therefore, we need to conduct more analysis to consolidate this hypothesis’ said Dr. Not.

The findings were recently published in the prestigious journal Geophysical Research Letters.

This transfer of heat and energy not only has direct influence on climate over Europe and North American but can impact the African and Asian monsoon system through its effect on sea surface temperature, hydrological cycle, atmospheric circulation and variation in the intertropical convergence zone.